The James Webb Space Telescope has a uniquely Canadian invention aboard that, with help from research on the ground, reveals the composition of the atmosphere of planets outside our solar system and their potential to harbour life
July 20, 2022
By
Roberta Staley
Institution(s)
Bishop's University
Province(s)
Québec
Topic(s)
Space
Astronomy

This summer, when you stare up at the stars musing upon the possibility of extraterrestrial life, know that some of the world’s greatest minds are closer to finding an answer to this enduring question, thanks in part to the Canadian contribution to the James Webb Space Telescope (JWST).

Launched into space December 25, 2021, the Webb telescope started beaming full-colour images to Earth for the first time in July 2022.

One hundred times more powerful than its famous Hubble predecessor, the Webb telescope enables astronomers to study the origins of the universe from 13.8 billion years ago, farther back than ever before. Where Hubble is in a close orbit with the Earth, the Webb telescope is much further away, suspended between the gravitational pull of the sun and Earth 1.5 million kilometres away, giving it an unobstructed view and allowing it to see more distant reaches of the universe.

All of this gives scientists, from institutions including the Canadian Space Agency, the European Space Agency and NASA, unprecedented access to the universe and an extraordinary new tool to answer fundamental questions about its origin.

Are we alone in the universe? A Canadian invention could help find answers

A device that was developed in Canada adds another dimension to the telescope’s capability — the ability to characterize exoplanets (planets outside our solar system) according to the chemical composition of their atmospheres. The Near-Infrared Imager and Slitless Spectrograph, or NIRISS, separates light into colours. By examining the spectrum of light filtering through an exoplanet’s atmosphere, researchers can determine its chemical composition, which is called the molecular fingerprint, explains Jason Rowe. Rowe is Canada Research Chair in Extrasolar Planet Astrophysics and professor in the Department of Physics and Astronomy at Bishop’s University  in Sherbrooke, Que. He was part of the team that built NIRISS at the Université de Montréal starting in 2015, and helped to create and test the software for the instrument.

The Webb telescope is capable of measuring changes of light with extreme precision, allowing it to detect exoplanets as far away as 1,000 light years, says Rowe. It is equivalent, he says, to detecting a firefly flitting in front of a lighthouse beam from several hundred kilometres away.

Is there life on other planets? 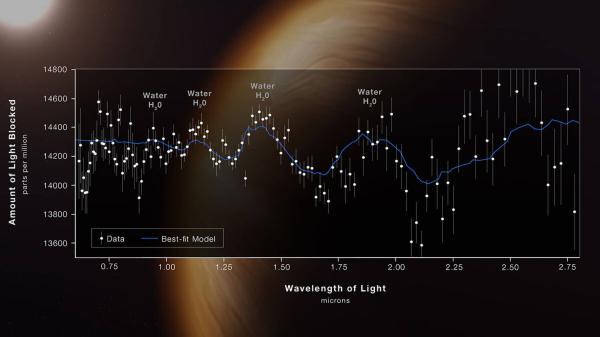 Rowe leads a CFI-funded research project that uses powerful computers to discover and characterize extrasolar planets, including those targeted by NIRISS. From millions of stars, Rowe and his team look for ones where an exoplanet passes in front of its host star from the point-of-view of Earth. These rare “transiting events,” as they’re known, make the star appear fainter as some light is blocked, giving researchers clues about the size and temperature of the planet.

With NIRISS, researchers can then determine the amount of oxygen, methane, water and carbon dioxide of an exoplanet, since different chemicals block different amounts of light at specific wavelengths.

“We measure the brightness across different wavelengths in the infrared and then do precision measurements of how much light was blocked by the planet. We then infer what the atmosphere is made of,” says Rowe.

But it’s not quite that simple. According to René Doyon of the Université de Montréal, who is Director of the Canadian JWST team, in order to interpret the atmosphere of an exoplanet, you need to know the planet’s density. To calculate its density, you need its mass and radius, which can only be measured from the ground.

That’s where another CFI-funded research tool comes in. SPIRou (short for SpectroPolarimètre Infra-Rouge, or Near-InfraRed Spectropolarimeter) an instrument installed at the Canada-France-Hawaii Telescope at the summit of the Mauna Kea volcano in Hawaii, is uniquely positioned to provide those missing pieces. It observes changes in the infrared light emitted by stars, which betray the presence of an orbiting planet. Those observations, combined with other techniques, allow researchers to calculate the planet’s mass and radius.

Data from SPIRou can also reveal if a planet has a core, if it’s rocky or if it could contain a significant amount of water. In August, SPIRou played a key role in the discovery of an exoplanet slightly larger than Earth that could be covered in a vast ocean, making it a prime target for JWST to determine if the atmosphere is suitable for life, says Doyon.

Together, each of these research tools will help answer such questions as: are exoplanets similar to those in our solar system? Does life exist elsewhere in the universe?

Rowe warns that there is neither the expectation nor any proof that intelligent life will be discovered. However, oddities in an exoplanet’s atmospheric chemistry may indicate the presence of living organisms, he says.

Doyon concurs. Although there’s currently no evidence that other habitable planets exist, he is optimistic. “We think we’ll get that evidence with the JWST. That would be a first.”

Twenty-year orbit and an opportunity for Canada to lead

The Webb telescope should maintain its orbit around Earth for up to 20 years, says Rowe. Made of various metals, and with coated mirrors, the telescope is rigid with thermal qualities to stop expansion of the instrument, which would alter its efficacy. Its electronics have tough integrated circuits that make it immune to the sun’s cosmic rays. “Overall, it’s relatively common materials, but they’ve gone through rigorous testing or been assembled to survive in the space environment,” Rowe says.

Due to Canada’s contributions to NIRISS, Canada has a guaranteed five percent of observation time of the Webb telescope’s images. This gives Rowe, members of his Lab for Exoplanetary Studies at Bishop’s University, as well as other scientists in Canada, one-year proprietary ownership of data, facilitating the publication of research papers. It is the opportunity for scientists in Canada to “learn about distant worlds,” says Rowe, and disseminate the findings to an eager global audience.