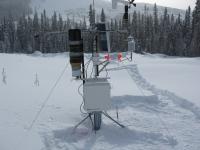 To the average Canadian, a research station getting completely buried in snow more than 1,500 metres high in the Cariboo Mountains might indicate that snow levels at this altitude are not at risk from global warming. But University of Northern British Columbia (UNBC) professor Stephen Déry says looks can be deceiving.

“We know that snowmelt is occurring almost 30 days earlier compared with 30 or 40 years ago,” he says. “The amount of snow is diminishing. We need to better understand by how much.” 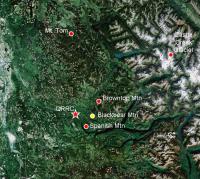 As the Canada Research Chair in Northern Hydrometeorology, Déry spearheaded a campaign with UNBC in 2006 to set up four research stations at high elevations in the Cariboo Mountains. One winter, one of the stations was completely buried in snow. While sophisticated computer models and remote-sensing satellites are telling scientists there is already significant snow loss at these elevations, there is little field data to back it up. Having the research stations “allows us to understand exactly what’s happening,” explains Déry, and to be better prepared for the inevitable impacts on tourism and ecology.

The impacts on tourism may seem trivial compared with possible ecological implications, but with the Winter Olympics focusing global attention on British Columbia’s mountains this month, it’s the loss of tourism dollars that may leave the most lasting impression. “People will realize that climate change will have dramatic impacts on sports and tourism,” says Déry. With shorter ski seasons, the loss of suitable terrain for backcountry skiers and snowmobilers and variable snowpacks and receding glaciers for adventure travellers, high-elevation snow loss from rising temperatures is already hitting the mountain-tourism sector where it stings the most: the balance sheet. 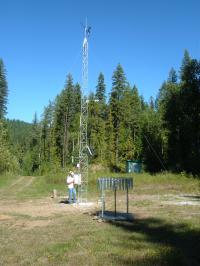 But the ecological impacts are also starting to add up. Snow is melting earlier, and the dry season is getting longer, which means less moisture in the soil and an increased threat of forest fires. An earlier, faster snowmelt can also cause rivers to flood and pose problems for run-of-river hydro generation throughout the province.

The melting snow’s most dramatic impact, says Déry, is on climate change itself, through the “snow-ice albedo feedback.” Albedo is a measurement of the amount of solar radiation reflected from Earth back into space. As an area of snow and ice melts, the albedo of its surface lowers, meaning more solar radiation is absorbed, which in turn melts more snow and ice. “That’s why it is so important to better understand climate change at higher elevations,” insists Déry.

Déry and his team of researchers are focusing on collecting the hard data that can verify whether predictions of greater snowmelt are correct and, if so, help us create the tools we can employ to adapt. It’s not a short-term project, but with Olympic dreams, tourist dollars and so much else on the line, the data are desperately needed. “This is going to take decades to do,” admits Déry. “We’re in for the long run.”