Can wind power the North?

For many Northern communities in Canada, diesel generators keep the lights on. Greenhouse gas emissions and health concerns aside, the sheer cost of relying on diesel is staggering, made worse by continually rising prices. Every ounce of diesel must be shipped in, which in the North, is exacerbated by often freezing temperatures, its distance from the rest of Canada, and how widely spread out its inhabitants are.

That’s why researchers at Aurora College’s Research Institute in Inuvik, Northwest Territories, are studying the viability of wind energy for Northern communities. Wind offers a promising renewable energy source with more stable pricing, and can decrease the reliance on diesel while also reducing outages and emissions.

Will a windy climate translate to reliable energy?

To determine if wind energy is feasible for an area, potential turbine sites must first be assessed for wind capacity to see if they can produce enough electricity. “The question is not whether there is wind, but whether that wind will translate into energy by integrating with the grid,” says Patrick Gall, Aurora’s manager of technology development.

Aurora has been involved with installing meteorological towers to study potential locations, but the process can be onerous, costly and time consuming. “We set up a tower in Norman Wells [Tłegǫhłı̨], where the ground conditions weren’t great,” says Gall. “We pretty much had to set up in a swamp.” Additionally, the tower required a lot of maintenance to ensure it was working effectively.

To reduce the time and cost of performing assessments, Aurora sought out the use of Light Detection and Ranging (LiDAR) technology — a remote sensing method that uses light in the form of a scanning laser to measure wind speed and direction, as well as air turbulence. Through CFI funding, the college acquired the first LiDAR device in the NWT.

LiDAR units are mobile, so researchers can deploy them much quicker than traditional wind towers. “The LiDAR weighs about 80 kilograms instead of the thousands of kilograms of a tower, and it’s in a fully enclosed skid that can be deployed from the back of a truck,” Gall explains. “We just tow it wherever we want. It took me and one tech three hours to set up the LiDAR while it took a whole crew with big equipment a week to do a tower.”

Aurora researchers first put the LiDAR next to a tower to compare its reliability, power consumption and maintenance. Once they confirmed it could do the work of a tower more efficiently, they then substituted in the LiDAR. The institute now has a second LiDAR making it possible to cover off more locations. “If you’re trying to actually figure out where to put a wind farm, it helps to assess more than a single location,” says Gall. “We can put one on top of a hill and one in a valley to get more accurate data for a potential farm.” 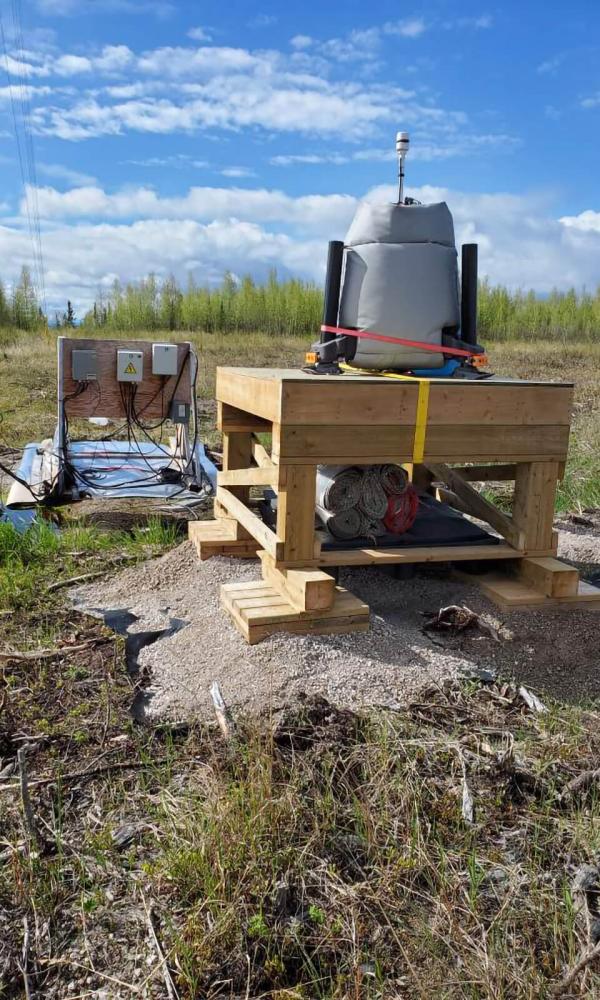 More sites mean more data, and help to paint a more complete picture. “It gives more certainty about wind integration,” Gall says. “We can make a resource map versus one location where a turbine might go.”

Plus, the LiDAR measures things like wind speed and direction up to 200 metres in height, while towers only detect up to 60 metres. This helps shave off uncertainties. According to Gall, that’s where LiDAR will prove its value since a two to three percent difference in certainty through increased data can make a difference of millions of dollars.

“This data is so valuable,” agrees Grant Sullivan, president of Nihtat Energy Ltd, a Northern, Indigenous owned and operated company focused on developing and operating clean energy alternatives and energy efficiency projects. “A lot of wind turbine sellers won’t even sell to you if you don’t have proven data. The LiDAR has been very accurate; more than the tower.”

Nihtat has developed solar projects in the North, but “solar season is from March to September when we have the lowest power consumption,” says Sullivan. “Winter is when we have high load months. Solar doesn’t answer the question of how we get renewable energy on the grid for winter — that’s where wind comes in. We need to match renewable energy for when it’s needed with when it’s available.”

Aurora’s LiDAR research will help companies like Nihtat develop a more precise understanding of wind as an energy source for Northern and other remote communities. “We’re hoping what we build will be enough to help new projects spawn more quickly,” affirms Gall.