Climate resilient crops that can do more with less

To create hardier crops that can produce more food, Leon Kochian is looking at “the hidden half” of plants — the root systems doing crucial work beneath the soil surface. The Canada Excellence Research Chair in Global Food Security wants to make them bigger and more efficient.

Crops with better root systems can produce a bigger harvest, he explains. Just as importantly, they can thrive in less-fertile soil. “[We’re] trying to figure out ways to develop the crops that are more efficient so they can use more of the fertilizer you apply,” Kochian says. “You get more bang for your buck.”

That’s significant for several reasons. One is financial, as fertilizer costs soar. Others are environmental. Producing nitrogen fertilizer from atmospheric nitrogen gas requires lots of energy. Phosphorus fertilizer, which is mined from the ground, is a commodity that’s becoming increasingly scarce. And because plants typically take up less than half of the fertilizer that’s applied, the remainder can pollute groundwater and run off into rivers and lakes, creating harmful algal blooms.

In Kochian’s CFI-funded lab at the University of Saskatchewan’s Global Institute for Food Security, dozens of researchers are identifying which crop varieties have the best root systems — and which genes are responsible.

Walk-in grow rooms are filled with cultivars of wheat, canola and other species. Investigators are studying those crops using specialized microscopes to visualize root systems in minute detail and a high-tech mass spectrometer to measure minerals at levels of parts per billion. At the lab bench, biologists extract DNA and RNA samples to analyze the different genotypes, aided liquid-handling robots. 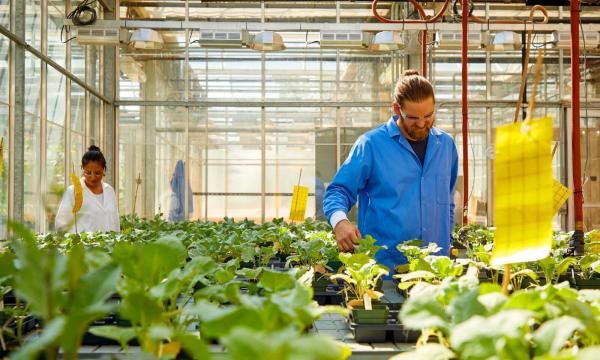 Other team members are decoding the signals crops send from their leaves to their roots via the phloem — the plant’s “information superhighway.” So far, that work has identified a protein that prompts plants to grow bigger and faster with less fertilizer.

The scale of the Institute’s research is massive, at times involving more than 40 investigators. And Kochian predicts equally massive payoffs, leading to improved cultivars of wheat, barley, lentils and more. “I see crops that are more climate change resilient,” he says. “What I see within 15 years is crops [that] can do more with less.”