Power, policies and sustainability in the global food system

Two things keep Jennifer Clapp up at night. One is how much the global food system depends on just a few staple crops grown in a few regions. The other is how the fertilizers, seeds and other inputs used to grow those crops are controlled by just a few mega-corporations.

Clapp is a political economist, a Canada Research Chair in the University of Waterloo’s Faculty of Environment, and a member of the UN Committee on World Food Security. Her research, which uses a CFI-funded collaborative lab space and videoconferencing equipment to work with international partners, focusses on ways to make food production more sustainable. And she adds power dynamics within the agricultural system to that analysis — and examines the deeply troubling vulnerability those dynamics create for the world’s growing population.

Unsustainable inputs in the food industry

For the past century, many of the world’s farmers have been locked into an industrial model of production that exacts a significant environmental toll.

Because just a handful of companies provide most of those inputs, they have little incentive to make big changes. At the same time, imported wheat and maize from just a few countries have replaced local staples in many parts of the world, leaving global food supplies vulnerable to everything from extreme weather to war.

“There’s widespread recognition that the system isn’t sustainable,” says Clapp. The question is how to change deeply entrenched, interconnected issues.

For Clapp, the answer starts with understanding the complex historical and economical roots of those issues, which is where her current research is focused. “When we say big ag is controlled by a handful of companies, well, why did they rise to power in the first place? And what challenges does that present to alternative visions for sustainability?” 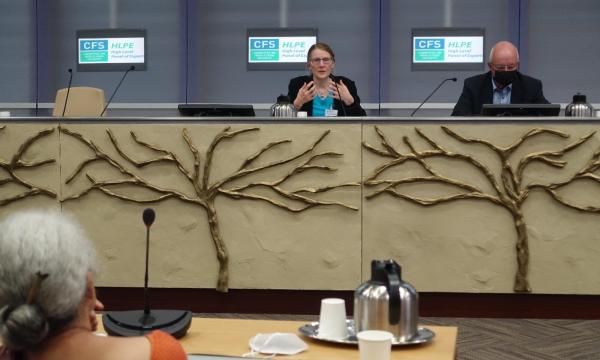 In the absence of market incentives, Clapp believes governments should play a bigger role. That includes investing in research into more sustainable production systems and providing support for local and regional food markets.

Although even the best policy levers can’t change systems overnight, Clapp sees reason for optimism. “I wouldn’t be doing this work if I didn’t wake up every day thinking that if we can understand and explain the problems, then maybe we can inch towards some better solutions,” she says.

Why is it so difficult to switch to a sustainable model of food production?

Listen to Jennifer Clapp explain the many pitfalls of conventional farming, how we’ve found ourselves locked in an unsustainable system, and how we might find our way out.

And I’m interested in how these inputs became, first of all, commodified, because if you look, two or three hundred years ago, we didn’t have a private seed sector, for example. We didn’t have a lot of the machinery that we have right now. We didn’t have a commercial fertilizer industry, and we certainly didn’t have agrochemicals.

I’m looking at how those elements of what we consider conventional farming today became conventional. How did they become commodified? How do they become market goods? And then how did they get controlled by just a handful of companies? So each of those sectors actually has three or four companies that kind of dominate most of the market.

So how do these things interact? The combination of these different inputs, as we see today, with 100 years of experience, of this rise of this kind of model which really got going since the early 20th century. It’s kind of locked in. These technologies, in a sense, are kind of locked into each other.

There’s widespread recognition that the system isn’t sustainable. But we’re at a crossroads of how do we make it more sustainable?

This debate over sustainability is actually huge. And the reason I’m researching these sectors is to understand why shifting to a new model is so hard. It’s very hard.

But the highly industrialized model that we have today has particular issues that are contributing to some of the big problems we have today like climate change and toxic pollution.

When this model came along, we actually started producing too much food that brought the prices down and drove farmers into poverty.

And then a lot of the mid-20th century there was the problem of getting rid of those surpluses. That’s why we have international food aid, for example, which then helped make developing countries a little bit more dependent on imported grains that they can’t even grow themselves, like wheat.

And so it created a situation where, ironically, countries that used to be self-sufficient in producing staples that were traditional crops like in Sub-Saharan Africa, have now become dependent on imports of wheat and rice. And we’re seeing that right now in the Ukraine crisis.

But there’s always that argument coming from industry. That argument has been put forward for 50, 60, 100 years, that world population is always growing, and therefore, we need this kind of industrial model to produce enough food.

But really, of the agricultural production that’s happening today, a big proportion of it isn’t even going to food. It’s going to biofuels — well to human food — it’s also going to animal feed. But we’re eating far more meat than we used to eat and probably more than is necessary for a healthy diet. So there’s just lots of nuance in that argument.

And you could even add into there, it makes food cheaper and more accessible, which may be the case, but it also has huge implications for the world’s agricultural producers, which is a third of the planet. It’s maybe 2 percent here in Canada or in North America that are farmers. But in the developing world, it’s huge. And so we’re talking about the livelihoods of billions of people.

What I do in my research, I’m a political scientist, a political economist. I’m interested in those connections, but also the debates that arise and how that plays out in international policy. So rather than saying I know what the answer is, it’s more like let’s hear what the different sides are saying, and this is why that debate matters.

Agriculture is a matter of national security for sure. A big part of the reason governments are very worried about this food crisis right now is they’re worried about unrest, especially in a time of economic turmoil. And just the whole uncertainty and conflict in the world. It’s a new world. It’s a different world than it was a few years ago.

Having a more holistic understanding of food security to encompass these questions of power and questions of environmental sustainability is essential if we want to solve the problem of world hunger. In the last five years, the numbers have only gotten worse. Food production is going up. Hunger is going up, too. This is not a good trajectory.

What keeps me up at night is knowing that we’ve been on this trajectory towards increased concentration and vulnerability. I would say concentration of the markets and the production, but vulnerability on the part of a huge proportion of humanity is the flipside of that. And we’ve been on that trajectory for a long time and we haven’t really been able to muster the political will to do something about it.

But I wouldn't be doing this work, I wouldn’t be talking to you if I didn’t wake up every day thinking that if we can understand and explain the problems, that maybe we can inch towards some better solutions.

So what gives me hope?

There are lots of people doing research where they’re comparing agroecological production or organic production with conventional industrial farming systems and showing that it can be as productive while being more sustainable.

That gives me hope to think that we could have a better system.

But what I think we need to figure out is how we have that diverse trading system, because it needs to go along with a diverse production system. And so there’s a lot of people calling for agroecology now. And it all sounds great and it’s a great rallying cry, but they haven’t really yet thought through how the markets are going to work with that.

And that’s coming up against huge economic structures like the World Trade Organization and stuff like that. My next project actually is to look at those questions, but I am not there yet.

So that’s a bit of a hope with a bit of caution.