VICTORIA, BRITISH COLUMBIA — Canada’s scientists are driven to make discoveries that lead to new opportunities, a stronger economy and a growing middle class. What they need are the sophisticated tools and laboratories that help them break new ground in areas such as climate change, clean energy, ocean research and artificial intelligence.

Today at the University of Victoria, the Honourable Kirsty Duncan, Minister of Science and Minister of Sport and Persons with Disabilities, announced more than $42 million for 37 universities across Canada to support 186 new research infrastructure projects. These investments, provided through the Canada Foundation for Innovation’s (CFI) John R. Evans Leaders Fund (JELF), will help universities attract and retain top talent from around the globe — particularly early-career researchers — with equipment that will give them a competitive advantage in their field.

The University of Victoria was awarded a total of $355,000 for two projects. In the Department of Civil Engineering, Heather Buckley’s lab will carry out cutting-edge research to tackle the challenges of contamination of drinking water in communities in mining regions. With the CFI’s support, she will build on her work to create new sensors that allow remote communities to monitor their water quality and ensure safe water supply for local residents.

In the Division of Medical Sciences, Leigh Anne Swayne will work to better understand how different molecules interact to control proper development and functioning of the brain. The new funding will allow her to upgrade her lab’s existing microscope to a super-resolution fluorescence microscope, one that will support the development of therapy aimed at mitigating the effects of debilitating brain disorders, arrhythmias, syphilis infection and cancer.

These investments, coupled with the Government of Canada’s significant support for basic science through Budget 2018, will help build Canada’s reputation as an international research leader while ensuring new generations of scientists have the opportunity to realize their ambitions. 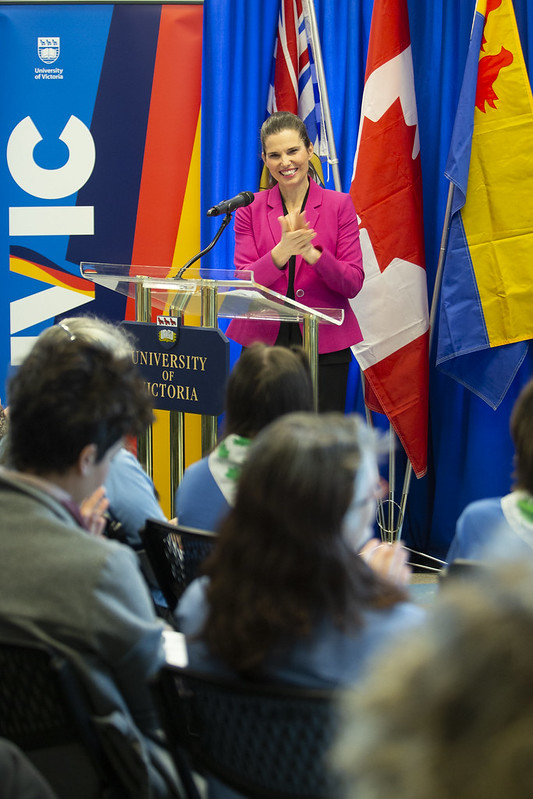 “I want to congratulate all of today’s recipients who will now have access to state-of-the-art tools and research infrastructure that will allow them to explore some of our most pressing questions. The answers they find contribute to the evidence our government needs to build a stronger economy and a more prosperous future for all Canadians.”
- Kirsty Duncan, Minister

“Investing in a new generation of research talent is more important than ever before for Canada. The Canada Foundation for Innovation is making it possible for our brilliant researchers to remain in Canada, to build our economy, and to contribute to solving the problems of the world.”
- Roseann O’Reilly Runte, President and CEO

“The Canada Foundation for Innovation investments in research infrastructure are absolutely critical for Canadian researchers to undertake cutting-edge research. At the University of Victoria, CFI investments support national platforms for ocean science and high energy physics, as well as research programs in neuroscience and remote sensing. On behalf of researchers throughout Canada, I wish to thank the CFI and Minister Duncan for their continuing support to Canadian research excellence.”
- David Castle, Vice President, Research

“Receiving this CFI grant means so much to me, especially in the UN Decade for Water. The problem of drinking water contamination in mining-impacted communities is one of chronic, long-term illnesses, and I am committed to making low-cost test-strip technologies that are available anywhere in the world where contamination of the water system due to mining is a concern.”
- Heather Buckley, Civil Engineer

“This support from CFI is so important to the work we are doing in our lab. This microscope is integral to all the work we do, increasing the type of questions we can ask and enhancing all our analysis. Having increased capacity to gather more information can reveal new things that you didn’t know to look for – kind of like getting glasses that suddenly make what you’re looking at so much clearer.”
- Leigh Anne Swayne, Cellular Neurobiologist

John R. Evans Leaders Fund
The CFI Research Facilities Navigator: An online database of labs and facilities that are open to working with business

University of Ontario Institute of Technology

NOTE
As part of this announcement, an additional $9,770,257 was awarded under the Infrastructure Operating Fund (IOF), a mechanism that assists institutions with the incremental operating and maintenance costs associated with the new infrastructure.