A facility at Memorial University of Newfoundland pumps water directly into its labs from the deep, cold ocean to study what’s living there
Eric Harris

The building with three wooden circles on the wall (above) is the Cold-Ocean Deep-Sea Research Facility, a new laboratory at the Ocean Sciences Centre on the rocky coast of Newfoundland north of St. John’s. Operated by Memorial University of Newfoundland’s department of ocean sciences and built with funding from the Canada Foundation for Innovation, the facility has been designed from the ground up for studying the unique biology of deep-sea life, aquatic infectious diseases and invasive organisms. It includes a Level 3 containment lab for analyzing pathogens in aquatic animals — particularly bacteria and viruses in aquaculture species.

The facility was also designed to blend with the environment: weathered wood cladding and other architectural details give it a nautical but earthy aesthetic. The designers — architects, engineers, aquaculturists — were primarily Canadian. As part of the overall Ocean Sciences Centre, it joins The Annex (at left) and the Joe Brown Aquatic Research Building (at right). 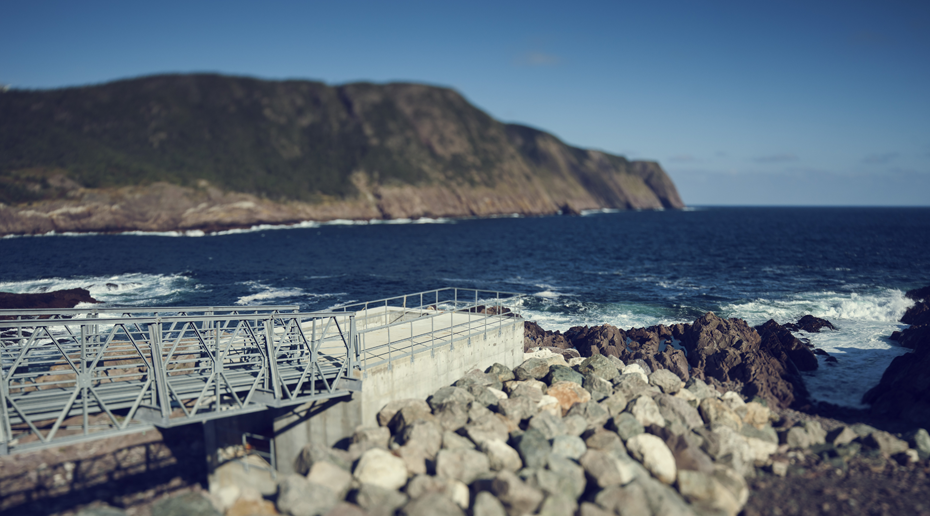 On the rugged shore, a girdered walkway crosses a rock pile encasing a concrete bunker that hides the pumps and plumbing 3.5 metres below. The pump house well, a shaft that goes down another 13 metres, holds water drawn from the cold, deep ocean, ready to be sent to the labs in the Cold-Ocean Deep-Sea Research Facility 100 metres away. Engineering and construction of the sea water intake system was particularly challenging. No pipe runs along the sea bottom. Instead, in a first-time achievement in Newfoundland, a directional conduit was drilled through fractured rock out under the ocean floor, exiting the seabed at a depth of 37 metres some 300 metres from the farthest point of land. The drill started at the Ocean Sciences Centre parking lot, passed under the existing facilities, and punched out some 600 metres away. 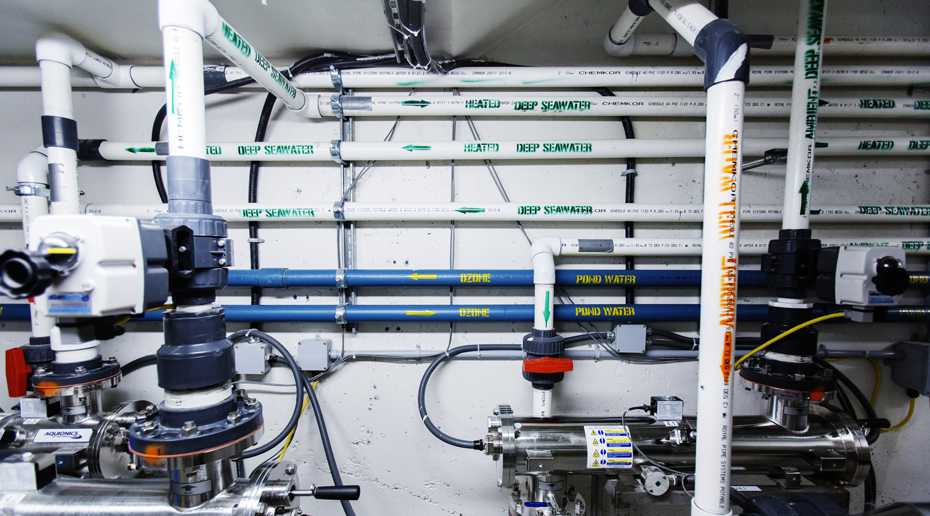 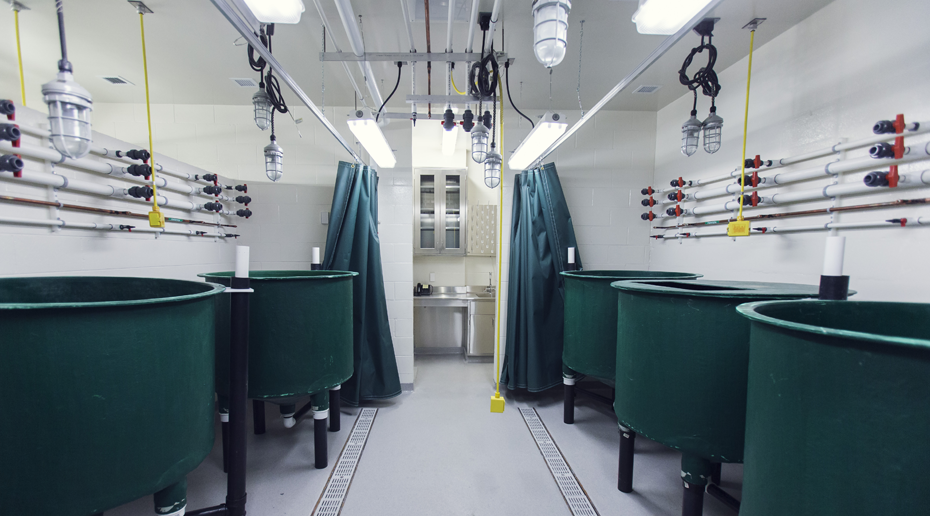 Designed to replicate nature, two disease-challenge labs in the facility’s Level 3 containment zone each have six 500-litre tanks to hold aquatic animals for study. Salmon, trout and other animals can be exposed to live pathogens here, allowing scientists to observe the complete life cycle of the disease-carrying microorganisms, from initial contact to the host’s death. By challenging healthy aquatic species with known pathogens in a controlled environment, much can be learned about basic physiology, tissue structure, immune-system responses and gene expression. Certain pathogens threaten the aquaculture industry, for example, and the impacts of vaccines and feed supplements can be studied here.

Level 3 containment requires researchers to change all outerwear (scrubs, lab coats, boots, caps) before passing through an antechamber with interlocked doors that seals off the actual containment space. Biohazard suits are not required. Programmed lighting dims and brightens, simulating natural cycles, and separate water lines supply sea water and fresh water, heated and ambient, to the tanks. Necropsies, dissections and surgeries are performed in the stainless-steel workspace. 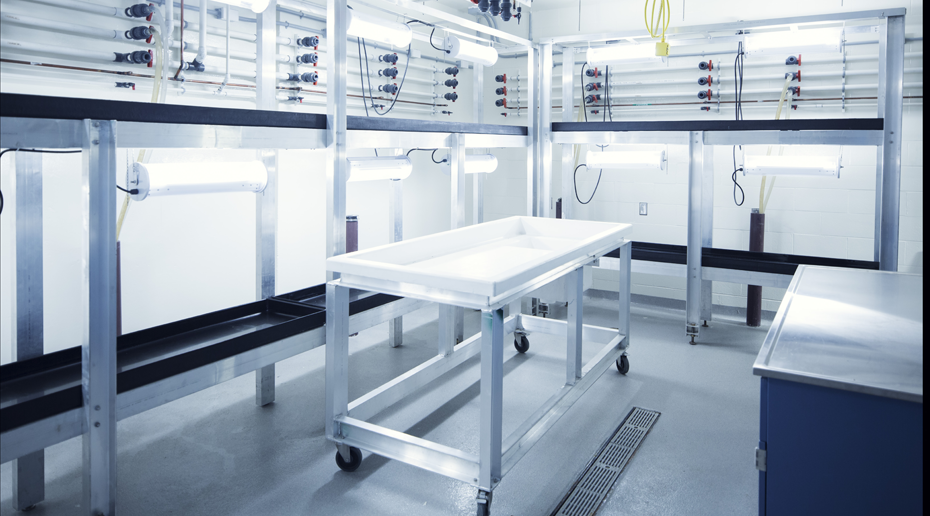 The racks in this lab are missing one thing: aquariums. This room in the Level 3 containment zone is ideal for hosting invasive species, another area of study at the Cold-Ocean Deep-Sea Research Facility. Certain crabs and other species not indigenous to the North Atlantic Ocean have migrated into those waters. Researchers here can study them without the risk of releasing the animals or their larvae into the ocean and furthering their spread. Intricate plumbing delivers sea water and fresh water throughout the labs. 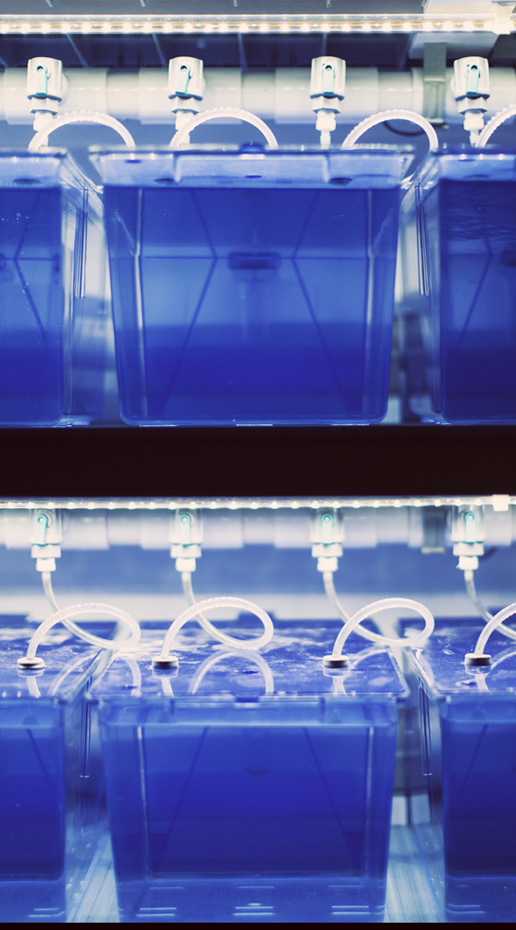 Multi-tank aquarium systems are available throughout the Cold-Ocean Deep-Sea Research Facility, in and outside of the containment zone. Natural sea water and plankton can flow through up to 24 rearing tanks at a time or be isolated in a single tank, giving researchers flexibility and control. Water temperature can be set for studying tropical or northerly species, or rapidly increased or decreased, to simulate a temperature shock. Levels of dissolved oxygen can be varied. Fresh natural sea water can be blended with filtered, recirculated water. LED lighting illuminates each tank.

Having a flowing source of natural deep-sea water on tap makes Memorial University’s Ocean Sciences Centre unique in Canada. Other aquatic labs recirculate their sea water, or truck it from the Ocean Sciences Centre, or use a product called Instant Ocean, a mix of sea salt and other components that are added to fresh water. 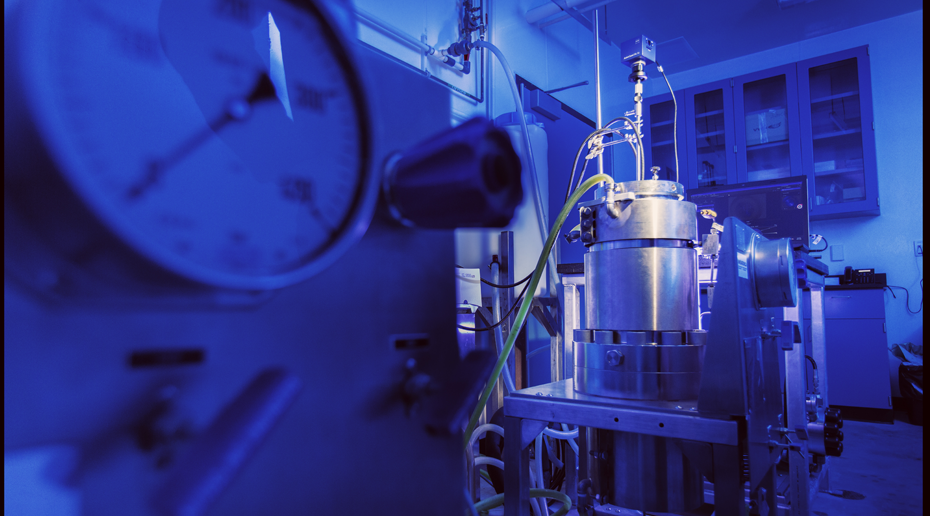 Precisely engineered pressure chambers at the Cold-Ocean Deep-Sea Research Facility recreate the pressure of the deep ocean and allow time-lapse and video monitoring of deep-sea species. Many such species are well adapted to the crushing hydrostatic pressure deep in the ocean, but they do not survive at sea level. Other animals survive the ascent better than others; invertebrates — sea stars, sea urchins, crabs — better than fish. Organisms collected from great depths can be transferred alive into the pressure chamber. An attached digital camera — an endoscope with lighting — peers through a window on top of the chamber, letting researchers observe species’ biology and behaviour. The water can be static or flow through the chamber, fresh water can be used, and the chambers can be ship-mounted. Two of the facility’s pressure chambers are the 7th and 8th of their type manufactured in the world. 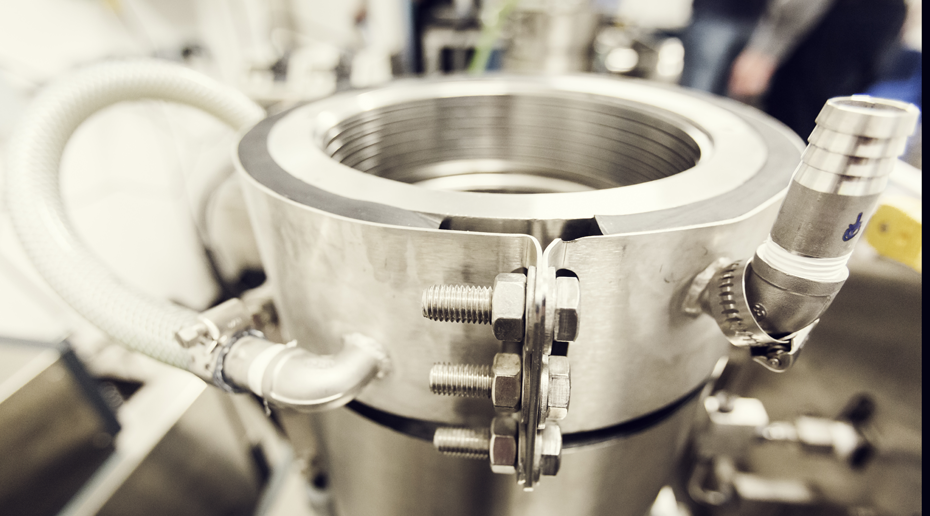 Two 19-litre pressure vessels reproduce the conditions found down to 3,000 metres below sea level, so that scientists can study living animals that exist at such depths. For example, researchers use these chambers to observe the effects of pressure and climate change on bottom-dwelling invertebrates, such as sea stars and sea urchins, from the bathyal zone on the Canadian continental slope, which lies between the continental shelf and the abyssal zone. The chambers are also used to compare the response of species from shallow waters with that of deep-sea species, to observe species fertilization, and to test deep-sea equipment, such as camera housings. A sleeve with glycol-filled pipes surrounds the central core, varying the water temperature in a range from 2°C to 100°C. Organisms near deep-sea hydrothermal vents, for example, survive in such heat. 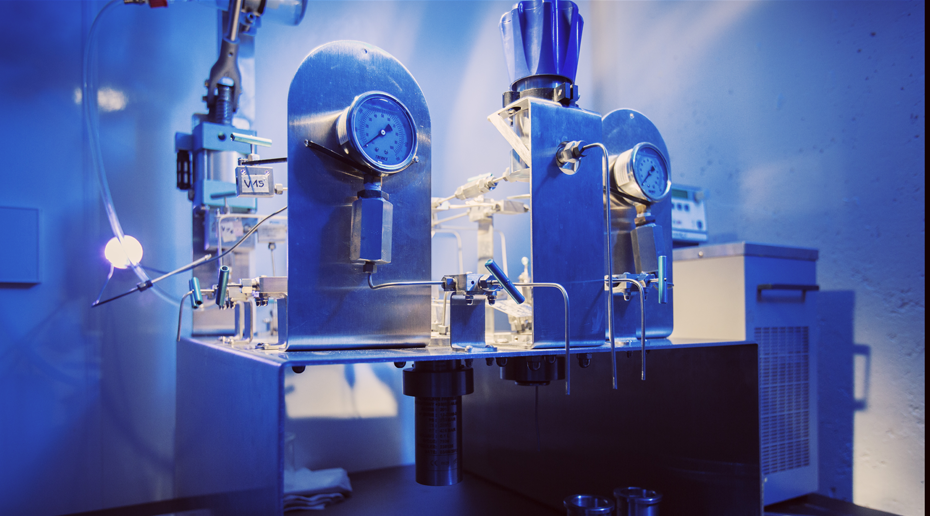 Smaller, but no less pressure

A small-scale pressure chamber system at the Cold-Ocean Deep-Sea Research Facility has 50-millilitre vessels that hold water at the same pressure as found 3,000 metres below sea level. This device allows small living specimens — cells, eggs, embryos, microorganisms — to be observed under pressure using microscopes to, for example, study fertilization and larval development in deep-sea species.

Portals of sapphire glass offer views into a world of living microorganisms made visible by microscopes. Water from the pressure chamber (pictured above) is fed to this microscope chamber, where it can be viewed with tubing connected and water flowing or isolated and disconnected. Either way, it retains up to 300 bars of pressure. Equivalent to 4,351 pounds per square inch (psi), that is considerably higher than, for example, a car tire at 30 psi. Sapphire glass is scratch-resistant and transparent to a much wider range of light wavelengths than the human eye, from ultraviolet to infrared. 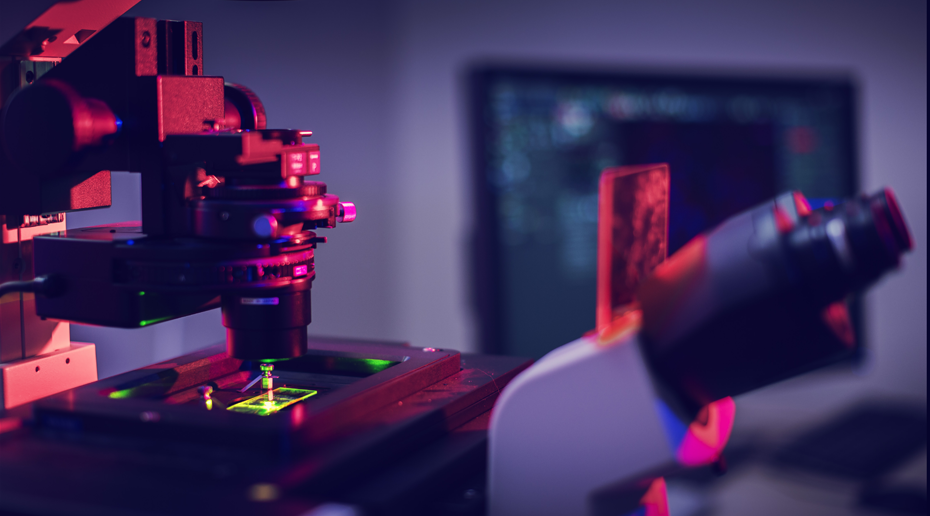 In addition to the deep-sea labs and the Level 3 containment zone, the Cold-Ocean Deep-Sea Research Facility contains ample equipment for microscopy and analysis. When illuminated in certain ways, many sea creatures become highly transparent. A confocal microscope can focus on very thin slivers of a specimen made see-through by a clever combination of laser light and phosphorescent antibodies. When hit with a laser, compounds in certain antibodies light up. These antibodies attach to certain proteins, and this allows a researcher to identify a specific protein in a cell — to see what and where it is. For example, just DNA can be illuminated, or just cell receptors. A computer assembles the layers to produce three-dimensional images of the sample. 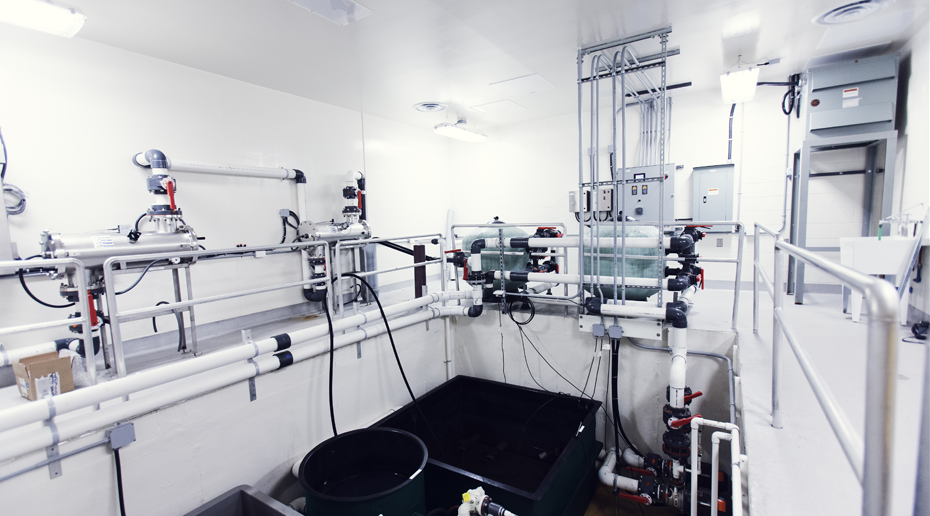 The water in the containment zone at Memorial University’s Cold-Ocean Deep-Sea Research Facility must be treated before it is released back to the ocean. Inside the effluent treatment plant, used water enters at the lower left, where black drum filters remove heavy sediment, which is sterilized in an autoclave before disposal. The water passes through carbon filters (green tanks at rear) and ultraviolet light (silver columns at left) before returning to the ocean. 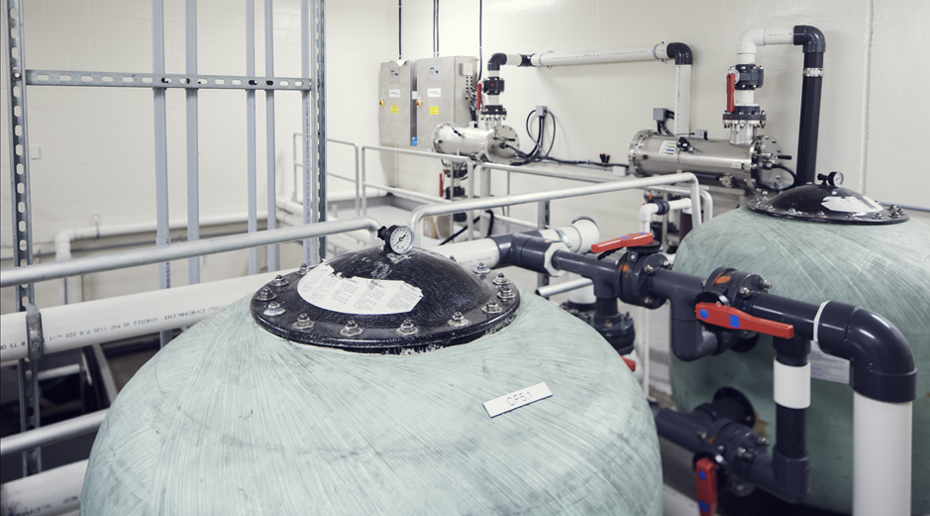 Before it is returned to the ocean, used water passes through filtration tanks in one stage of the effluent-treatment system at the Cold-Ocean Deep-Sea Research Facility. 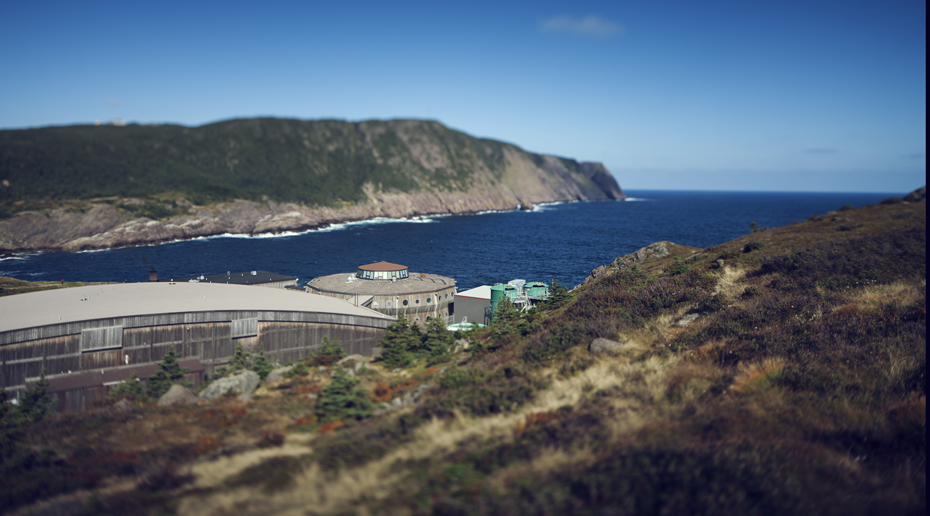 The curve-roofed building is the Joe Brown Aquatic Research Building, which contains large holding tanks with fish for aquaculture studies. The round building is the centre’s main building. The location is a great place to see icebergs.