A group of breast cancer survivors became each other’s cherished friends and support network after participating in a study at the University of British Columbia on the effects of exercise on their recovery
September 27, 2016
By
Photos Ben Nelms with text Dane Lanken
Institution(s)
University of Northern British Columbia
Province(s)
British Columbia
Topic(s)
Cancer/Oncology

It's not a fitness regime these Vancouver women would have chosen to be in. They were all battling breast cancer, and their doctors suggested, even prescribed, that they join a special exercise program, designed by researchers at the University of British Columbia, for women undergoing chemotherapy and radiation treatments. They did. And they found that they felt stronger and fitter after even a few classes, and better able to get through their ordeal.

What they also found, and this surprises them now, even a year or two later, is that they became friends. They stayed in touch long after the cancer treatments and prescribed exercise ended. 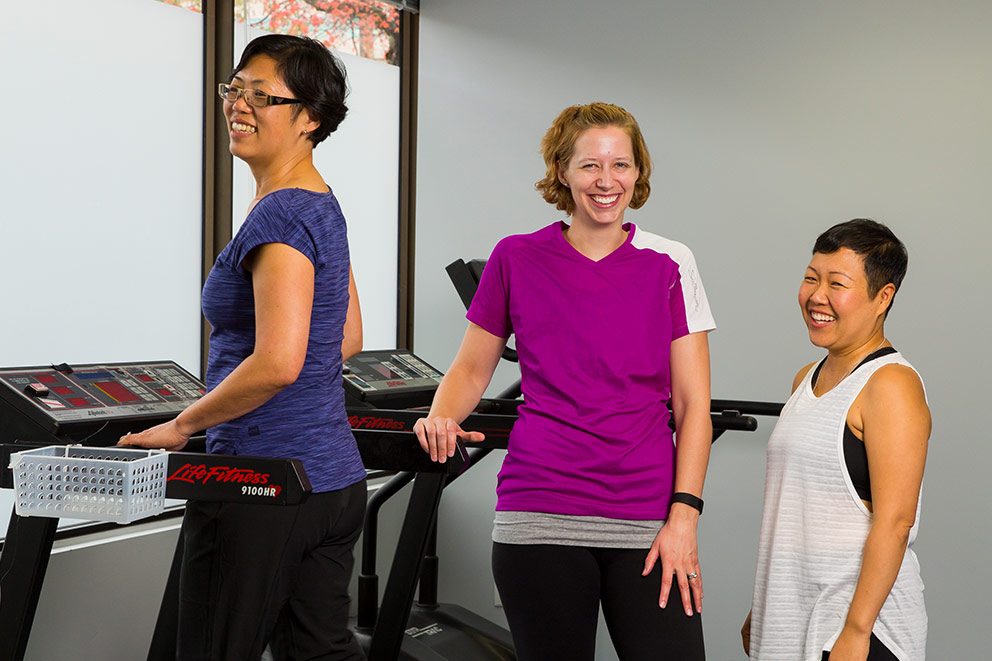 The gym became a vital venue for sharing information, from discussing symptoms to tips on where to get wigs to, as participant Julie Donegan puts it, “laughing and joking about our condition.”

“I couldn't have done it without them,” says Mary Chow-Humphries (left, beside Kara Horsman and Sharon Shum). “We were a group going through the same thing, through all our surgeries and treatments.”

Kara Horsman remembers the feeling of the gym as a safe environment, a private room with tinted windows, just two blocks from the BC Cancer Agency, and as she says, with “only women in the same predicament.”

“It got me out of the house,” Horsman adds. “It helped with nausea. In the beginning I thought exercise might help. My thought now is, how would I have made it without it?” 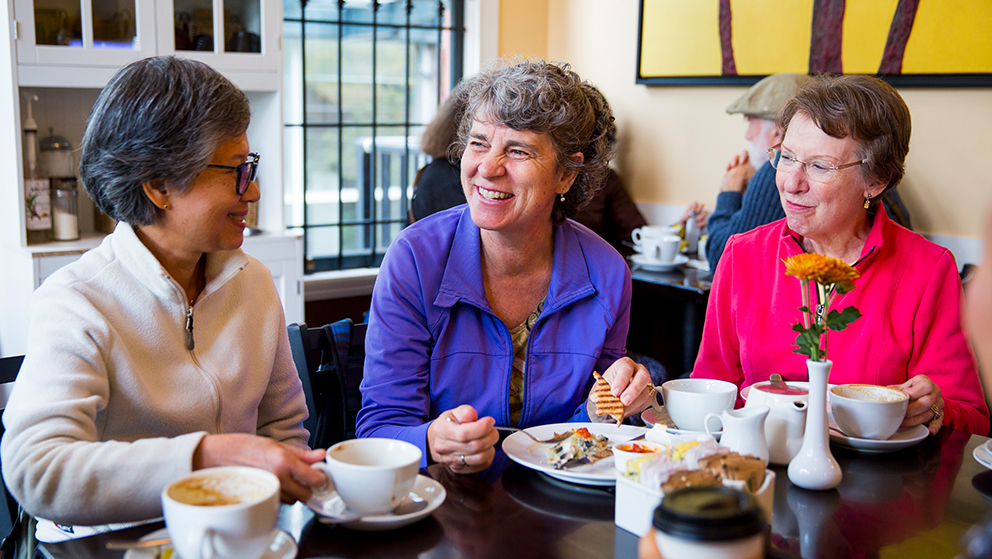 An unexpected bonus with the gym’s location was the friendly Caffè Cittadella just two blocks away. The women made it a regular post-workout stop, and sessions there cemented their close-knit relations. Enjoying an outing here are Ling Takara, Christine Gaio and Julie Donegan. 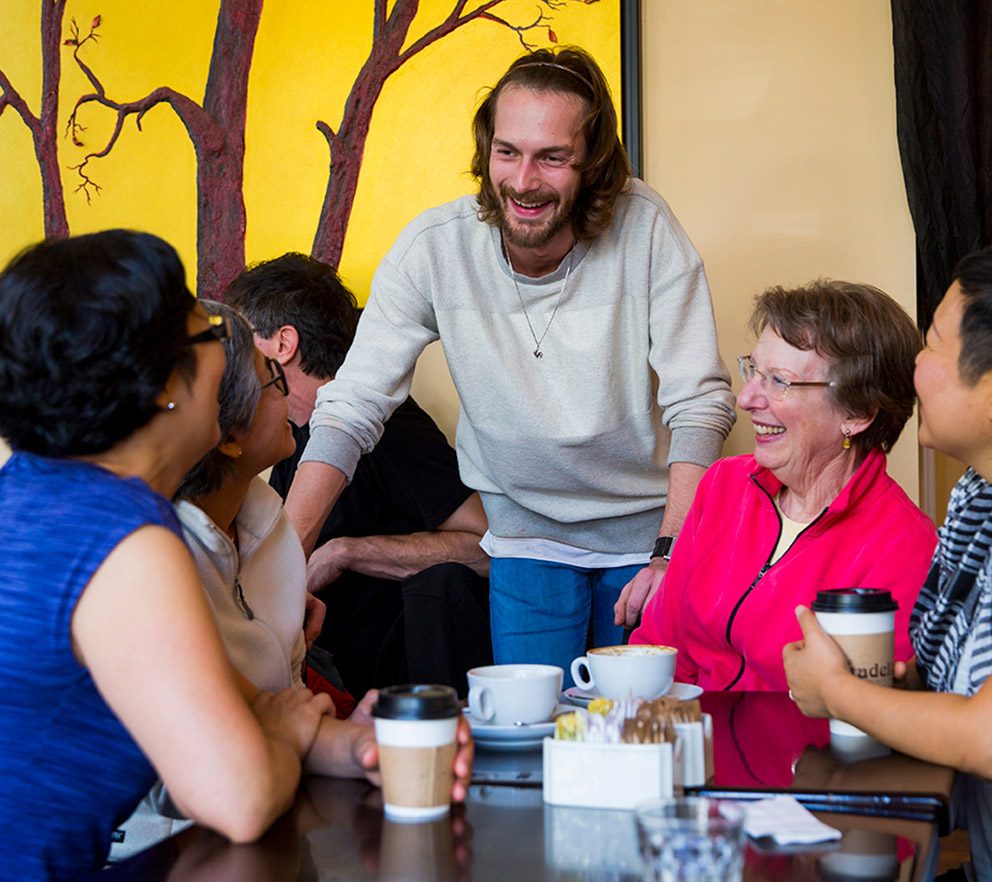 Sharing a laugh with the Caffé Cittadella's affable co-owner, Alex. 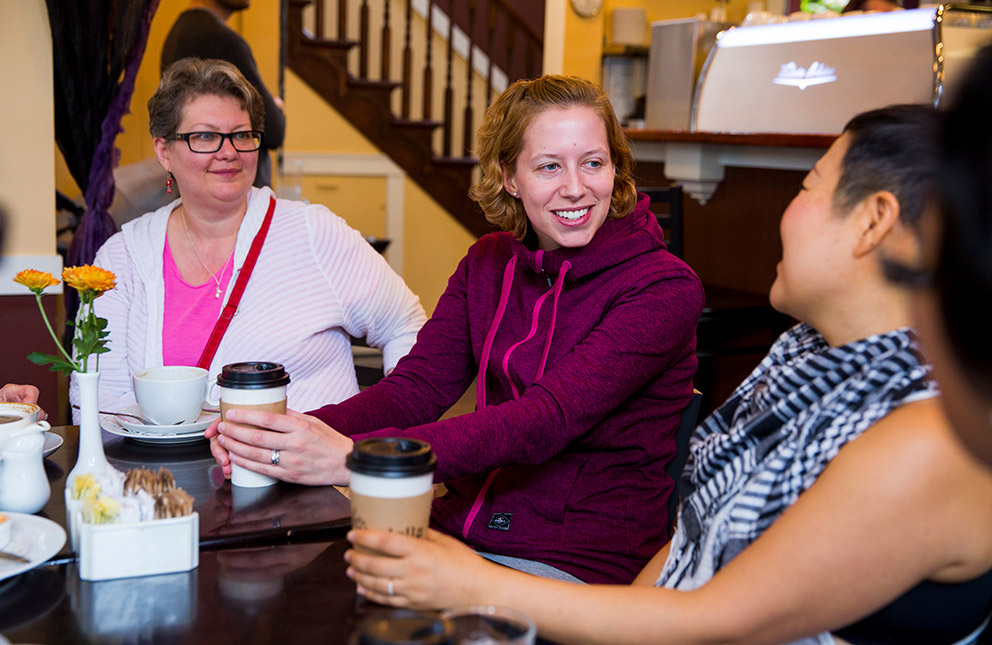 The breast cancer battlers’ gym classes weren’t conceived as fostering long-term social connections — that was just the happy by-product. Nowadays, many of the participants still go to shows together, go on trips, meet up at the café, do potlucks or dragon boating, even go back to the gym. Friendships formed in the crucible of breast cancer, and the camaraderie of the gym, it seems, are lasting ones. 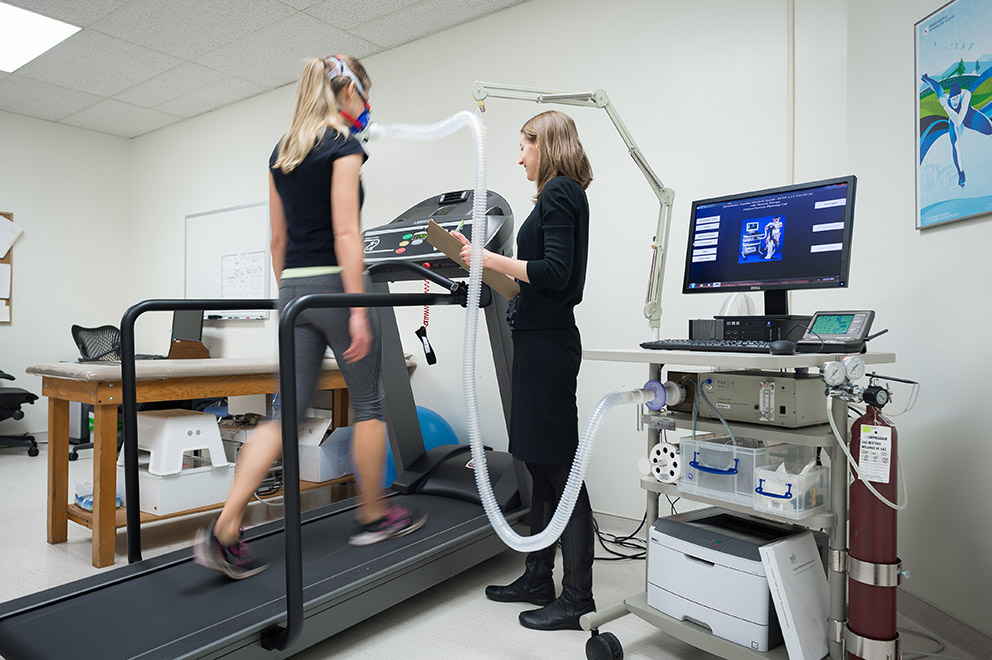 Researcher Kristin Campbell monitors a treadmill walker in a test to determine aerobic fitness. Campbell led the research project that designed the exercise program that the women featured above participated in. The purpose of the project was to test the feasibility and efficacy of adding exercise to the standard of care for breast cancer in B.C. Researchers had identified a gap in programming for women with breast cancer, since many would be reticent to visit a public gym because they were worried about infection or things like being noticed for not having hair. Some women are also participating in a longer-term study in Campbell’s lab. By observing and evaluating the patients' performances, Campbell hopes to be able to match gains in their physical condition with better response to treatment and quickened recovery. 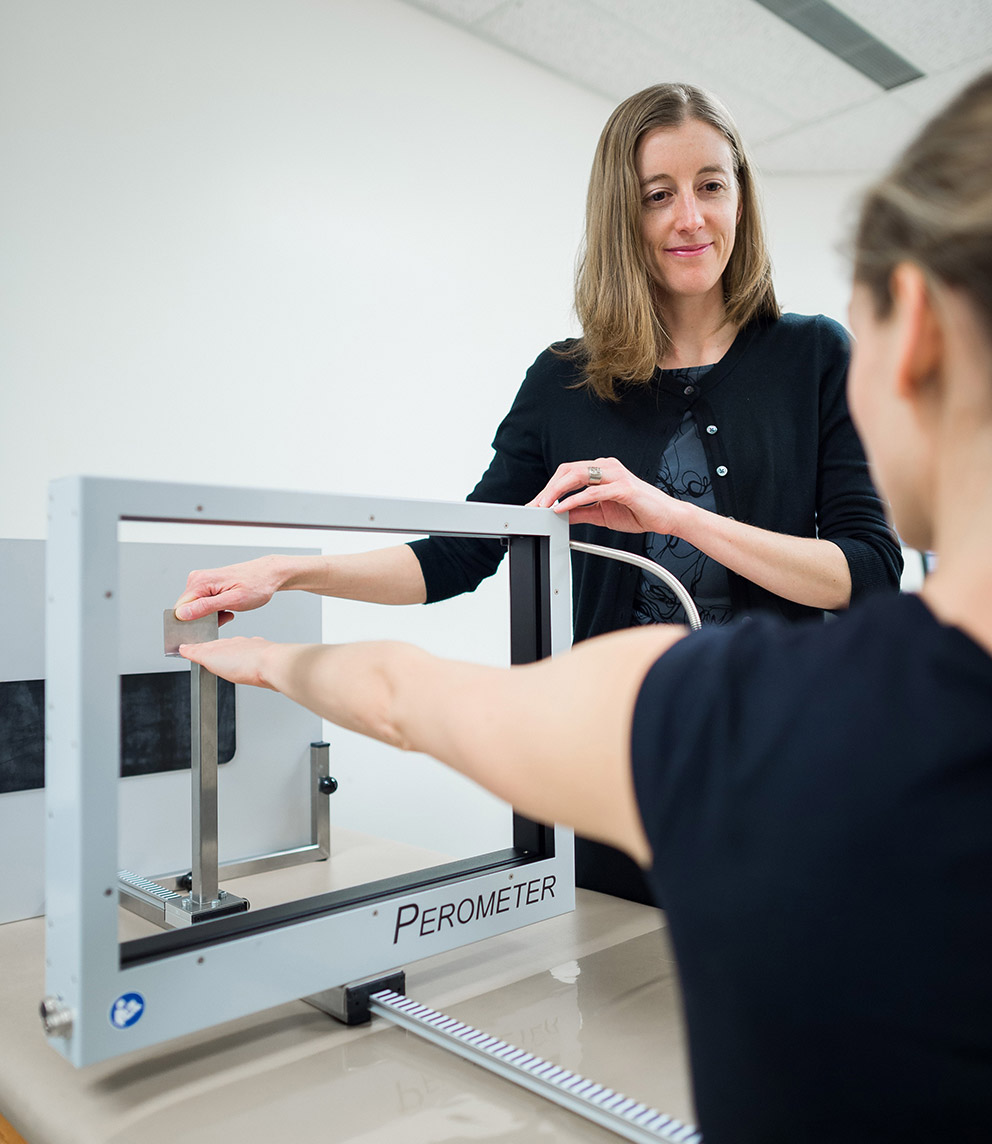 Campbell, here using a perometer to measure a participant's arm volume, says full results of the study to determine the value of exercise to women undergoing breast cancer chemotherapy and radiation are still pending, but that early indications are that it can be highly beneficial — this apart from the support and social benefits the participants themselves have enjoyed. 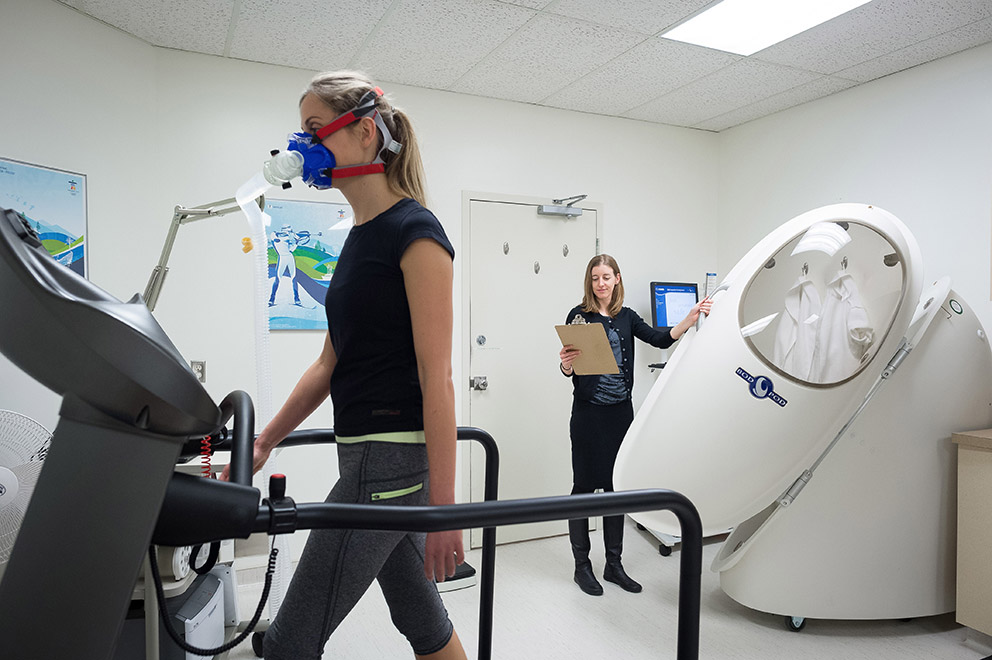 Campbell opens the door of a Bod Pod, a device patients sit inside that uses air displacement to measure body composition including percentage of body fat and muscle mass.

Oncologists involved in the exercise study have identified benefits in shifting emphasis from disease to health, and see potential for expanding the program to other areas of cancer care. 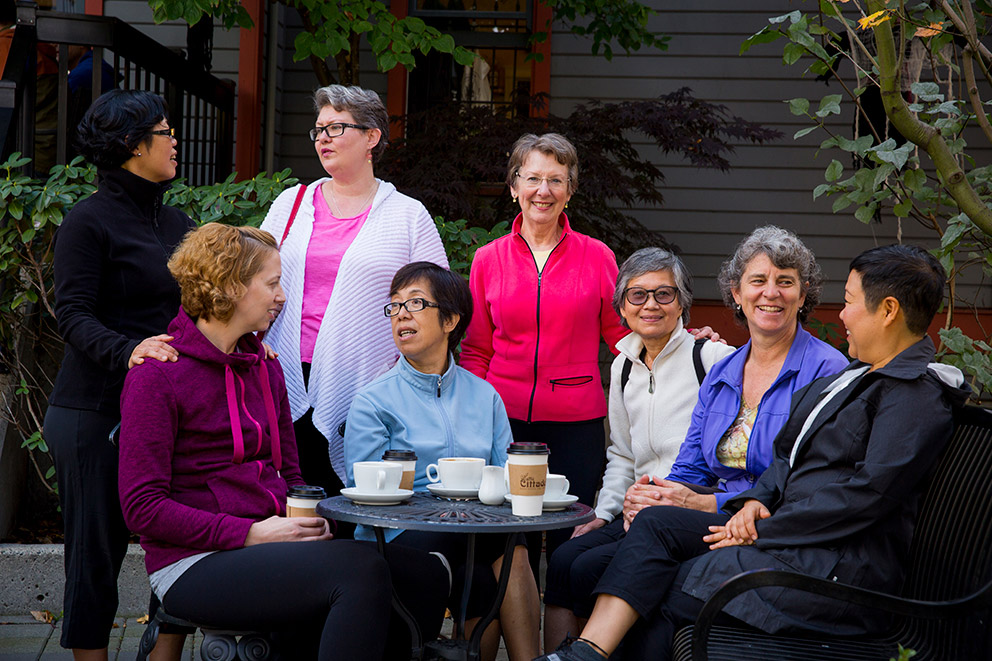 The scientists' evaluation of the study these women took part in may not yet be conclusive, but the women themselves have found lasting value. Exercise added physical fitness and offered a welcome distraction. Regular classes fostered fellowship, mutual support and an unexpected confidence. And the camaraderie that took root in the classes has blossomed into deep and very special friendships.

article
The mother of all nutrition labs
Kyly Whitfield of Mount Saint Vincent University in Halifax is tackling the polarizing topic of breastfeeding at the Milk and Micronutrient Assessment Lab, or MAMA Lab

article
Common cancer, uncommon approach
Not all prostate cancer research is the same, even if it is the most common cancer affecting men

article
Does your social life make you happy?
The University of British Columbia’s Frances Chen uses sophisticated research tools to determine how our social lives — online and otherwise — affect how we feel and behave