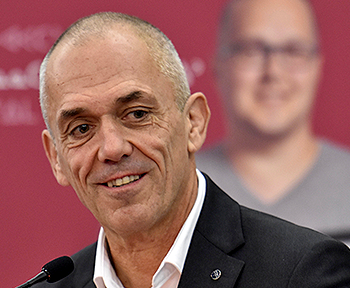 OTTAWA, ONTARIO — Antoine Petit, President and CEO of the National Centre for Scientific Research (CNRS) in France spoke about the future of artificial intelligence and the importance of global collaboration at the 2018 annual public meeting of the Canada Foundation for Innovation on December 4. Petit said it’s important to include everyone in conversations surrounding the ethics of these technologies. “This will require research from mathematicians and computer scientists of course,” he said, “but must also include philosophers, sociologists, historians and ethnographers.”

Petit added that as one of the world’s leading research institutions, CNRS prioritizes international collaboration in all fields of scientific research. Petit pointed to TRIUMF, Canada’s particle accelerator centre, as an important example of how Canada and France have joined forces in establishing infrastructure for research in particle physics, materials science, nuclear medicine and more. He added that almost all CNRS institutes have at least one joint lab with a Canadian university.

Watch: Antoine Petit, President and CEO of the National Centre for Scientific Research (CNRS) in France, speaks about the future of artificial intelligence at the CFI’s annual public meeting

In addition to Petit’s presentation, Ingrid Pickering, the Chair of the CFI’s Board of Directors, presented the CFI’s latest annual report for the fiscal year that ran from April 1, 2017, to March 31, 2018. Among other things, Pickering highlighted the Innovation Fund results announced in October 2017, which awarded a total of $423.7 million to 117 projects at 61 institutions for cutting-edge research projects across Canada. Roseann O’Reilly Runte, CFI’s President and CEO, reviewed the CFI’s financial statements for the 2017-18 fiscal year and pointed to some important milestones over the past year, including a promise for permanent funding in the 2018 federal budget. “Budget 2018 gave the CFI permanence and renewed resolve to continue the pursuit of excellence in all we undertake,” she said. “We can invite Canadians to join the conversation about what research in this country can and will achieve in the coming decades.”