When science and creativity collide

When science and creativity collide 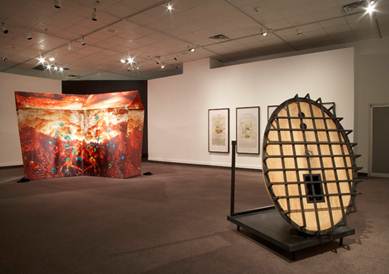 Brothers and University of Alberta professors, Sean and Timothy Caulfield brought artists and researchers together to create “Perceptions of Promise: Biotechnology, Society and Art,” an interdisciplinary exhibition of visual art and essays that explores the issues surrounding stem-cell and biomedical research. The exhibit opened at Calgary’s Glenbow Museum in 2011.

They’ve both served as Canada Research Chair council members, co-edited two books together and grown up in the same house in Mystic, Connecticut, but you’d be hard pressed to find a pair of siblings with more contrasting viewpoints on science than artist/art professor Sean Caulfield and legal scholar Timothy Caulfield.

“I’m more concrete,” says Timothy, a Canada Research Chair in Health Law and Policy at the University of Alberta (U of A) whose research has helped shape national policy on genetic and biomedical laws. “I don’t think all knowledge is relative. But Sean has more tolerance, and that’s a really healthy tension the two of us have.”

That tension and the brothers’ casual conversations about how science is portrayed in popular culture gave birth to “Perceptions of Promise: Biotechnology, Society and Art,” an interdisciplinary exhibition of visual art and essays that explores the contentious issues surrounding stem-cell and biomedical research.

As part of the exhibit, artist Marilene Oliver collaborated with three researchers to re-create scans of a human blastocyst — the cell mass that occurs in the fifth day of fertilization and is the first sign of new life — in a three-dimensional installation tall enough to engulf the viewer. For another installation, Clint Wilson imprinted photographs of butterflies in their natural habitat with logos of biotech companies. Both are examples of the awe and anxiety that modern science inspires.

Curated by art history professor Lianne McTavish, who teaches in the U of A department of art and design, where Sean also works, the exhibit opened at Calgary’s Glenbow Museum in 2011. It has since toured through New York City’s Chelsea Art Museum and McMaster University, in Hamilton, Ont., and recently made its last stop at the U of A. Each opening night was packed with people who experienced a rare collaboration between artists and scientists.

“The problems raised by biomedical and stem-cell research are really complex and multi-faceted and tend to polarize debate,” says Sean, who received Canada’s first fine arts research grant and funding from the Canada Foundation for Innovation (CFI) in 2001 to build a printmaking studio, for which the U of A has become renowned. 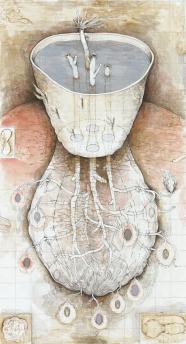 Sean’s research includes books and artwork that examine the impact of technology on the environment and human bodies. For “Perceptions of Promise,” he contributed an essay to the exhibit’s companion book as well as abstract drawings in the vein of 19th-century scientific illustrations — but with an absurdist touch that speaks to our anxieties toward biotechnology. “They [anxieties] tend to raise emotions that are hard to articulate, and I think if we are going to have a big societal discussion around these questions, we have to find expression in things like art. Otherwise, they won’t be said.”

Sean praises the participants and funders, such as the Stem Cell Network researchers who opened their research and data to artistic interpretation. For one exhibit, a researcher shared scans of stem cells with artists Liz Ingrim and Bernd Hildebrandt. Using the U of A’s CFI-funded equipment, the artists integrated the scans with poetry and images of water and human bodies, then printed them onto fabric and hung it up to form a Y-shaped tent. Attendees who walked through it were surrounded by various symbols of human life.

“Overall, our goal wasn’t to answer questions about stem-cell research — it’s a complex issue — but just to get people thinking,” says Sean. “People came away from the exhibition feeling as if they understood this issue in a more nuanced way.”

Nuance is important in a conversation that’s frequently bombarded by extremist ideas and science fiction. After all, when we think of biomedicine, debates on human cloning and the origins of life, rather than vaccines and biofuels, often come to mind. “It’s not an exaggeration to say that stem-cell research is probably one of the most — if not the most — socially contentious areas of science in the last 50 years,” says Timothy, who believes that art can be a compass for our level of comfort.

“Perceptions of Promise” wasn’t the first time the Caulfields gathered people of diverse backgrounds for artistic purposes. In 2008, they collaborated with the Art Gallery of Alberta on “Imagining Science,” an exhibition featuring BioArt, a controversial practice that turns living tissue, bacteria and even blood into creative materials. When they had an opportunity to repeat the project model, the brothers hoped it would inspire sustained partnerships between artists and scientists, which is exactly what happened.

“Perceptions of Promise” contributor and Stem Cell Network scientist-in-residence Paul Cassar recalls hitting it off with artist Daniela Schlüter during a break between workshop sessions. Although they disagreed about when life begins in the womb, he says, “we developed this profound respect and adoration for each other’s work, based on this trust that we’re both working with the utmost integrity, where I could actually give her some data and she would not turn that data into something scary.”

Cassar gave Schlüter images of embryonic stem cells and his pencilled lab notes. “I trusted that she would tell the story she wanted to without injecting my philosophies,” he says. “At the end of the day, we’re both storytellers, but I use hard data to tell mine.” Their collaboration created a series of large-scale, mixed-media canvases that put isolated scientific symbols — drawings of stem cells, Cassar’s notes, traces of the artist’s actual chromosomes — into a wider context with imagery of family and human history.

This type of work not only has given scientists a new appreciation for the artistic process but has also made artists like Sean more sympathetic toward researchers. “They’re under so much pressure,” he says. “They have to produce results, and they receive these big research grants so that they can come up with a cure in five years. On the other end, the media is saying that either their research findings will be the next greatest thing to save the world or they’ll be the beginnings of a zombie apocalypse. And they have to wrestle with that.

“Of course, it’s neither of those things,” he adds. “It’s something in the middle.” 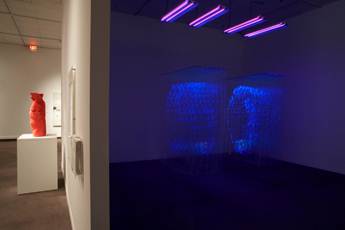 Marilène Oliver’s “Keep Me Safe from Harm,” an installation based on the scans from a human blastocyst enlarged to approximately two metres by two metres, drawing on acetate sheets, florescent light, 2010. Photo credit: Sean Caulfield/University of Alberta 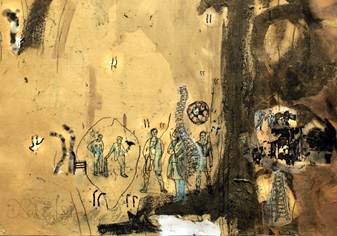 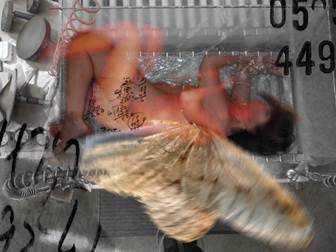 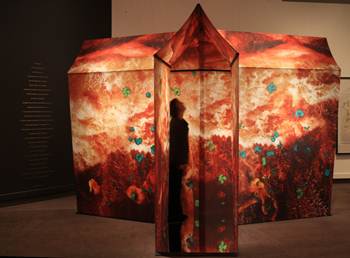