A whale of a mystery

A whale of a mystery

Unlocking the secret behind the formation of baleen
By Stephen Strauss 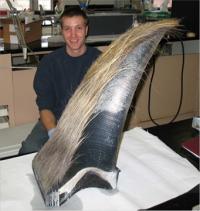 What’s the next thing a graduate student should do after his master’s thesis solves a biochemical mystery that has befuddled zoologists for generations?

This is a problem that 28-year-old Lawrence Szewciw recently faced after he and his professors at the University of Guelph determined the physiological mechanism by which some whales effectively turn hair into bonelike baleen in their mouths.

Primordial whales were born with teeth and effectively functioned as carnivores, but about 30 million to 40 million years ago, some whale species began changing their eating strategies. They sucked in up to 68,000 litres of water — enough to fill a school bus — laden with krill, shellfish, sardines and other small foodstuff and filtered the water through coarse bristles known as baleen hanging from the upper part of their mouths. Acting as a kind of biological comb, baleen is made of alpha-keratin, a key structural material in hair, feathers, wool, claws, hoofs and horns. 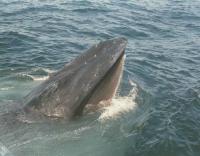 A humpback whale uses its baleen to siphon its tiny food from the water.
D. S. Fudge, University of Guelph

The biophysical mystery of how baleen was formed, says Szewciw, was something that Douglas Fudge, his thesis adviser, had noted in his PhD.

“It was generally believed that keratin hardened through exposure to air,” says Fudge. But clearly there is not a lot of air in a whale’s water-filled mouth.

While Szewciw puzzled over this fact, he noted a large amount of calcium salts in whale tissue and wondered about its function. He began searching for a connection between the keratin and presence of salt using a variety of imaging technologies. After looking at the baleen cells through transmission electron and light microscopes, Szewciw and Fudge discovered that the calcium salts reinforce the keratin and transform it into something stiffer. If you remove the calcium from whale baleen, the biological comb loses roughly half its stiffness. 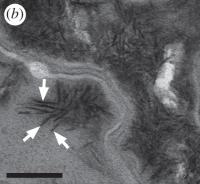 With this discovery, the pair turned to Guelph physicist Diane de Kerckhove to tackle a different problem. What accounts for species differences in calcium salts?

De Kerckhove used X-ray emission analysis to measure the location and the amount of calcium salts in three different whale species. She found a relationship between the stiffness required in each species’ baleen and the amount and distribution of the calcium salts within the whale’s tissue.

The sei whale, for example, which feeds on tiny plankton, needs more calcium because its baleen has to be finer and stiffer than that of whales that feed on larger prey. 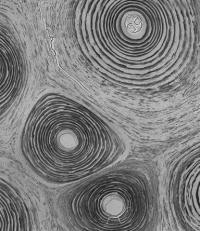 Although the research focuses on basic biology, Szewciw and Fudge believe their discovery may provide information on how future changes in ocean chemistry, such as increases in acidity, might change a whale’s mouth chemistry and, in so doing, potentially throw off the whale’s ability to produce the bony brushes that are vital to eating well.

Szewciw and Fudge’s discovery has been published in leading scientific journals, and articles have sprung up on whale websites around the world. For his part, Szewciw has been busy updating the Wikipedia entry on whale baleen, helping share his discovery with the general public.