With Arctic sea ice fast disappearing, a University of Manitoba researcher helps to address issues of sovereignty, environment, and culture
By Brian Bergman
For many years, David Barber considered himself a climate change skeptic. A sea ice specialist who has worked in the Arctic since 1981, Barber knew from the outset that significant changes in sea ice patterns were occurring. But he put it down to the influence of natural variability. By the mid-1990s, though, mounting evidence of how greenhouse gas emissions are transforming the Earth’s climate—with the starkest effects in the Arctic—turned him into a convert. These days, Barber, who is a Canada Research Chair in Arctic System Science at the University of Manitoba, speaks out about the dangers of global warming. He is also responsible for some of the best scientific research to date supporting the need to act on climate change—before it’s too late.

Over the past five years, Barber has acted as one of the lead investigators on the Canadian Arctic Shelf Exchange Study (CASES). The study brought together 400 scientists from 11 countries to study the ecosystem and climate impacts that have led to and are the result of thinning and disappearing ice in the Arctic Ocean. The CASES research platform is a decommissioned Canadian Coast Guard icebreaker, the Amundsen, which received a $27.7 million retrofit to make it research-ready.

In 2003, the CCGS Amundsen made its maiden scientific voyage to the southern Beaufort Sea where the ship was deliberately steered into a thick winter ice pan and trapped for six months. Teams of scientists, working in rotating six-week shifts, probed every conceivable aspect of this remote marine ecosystem. “In the physical world, we studied everything from the bottom of the ocean to the top of the atmosphere,” says Barber. “In the biological world, we observed the impact of sea ice on everything from viruses to whales and polar bears.” The Amundsen has ferried researchers to the Arctic every year since to do further sampling, and to set up remote observatories as part of an initiative known as ArcticNet.

ArcticNet is Canada’s only northern Network of Centres of Excellence and the largest Arctic research network in the world. Linking natural, medical, and social science researchers from centres of excellence across Canada—and from 11 other nations—ArcticNet builds on the knowledge and monitoring systems put in place by CASES. The network aims to give a more holistic picture of the impact of climate change by looking at issues such as human health and Inuit settlement patterns.

What the scientists have learned is that Arctic sea ice is disappearing at an alarming pace. Satellite data indicates the Arctic is losing multi-year pack ice (as opposed to first-year ice, which forms each fall and thaws at the end of winter) at an annual rate of 74,000 sq. km. That means an area of sea ice nearly the size of Lake Superior melts ever year. Moreover, this has been happening for nearly 30 years, meaning that more than two million sq. km has been lost so far. At this rate, it’s projected there will be no summer ice in the Arctic by 2050—and perhaps much sooner, if recent trends continue.

Why is this important? For one thing, it means the fabled Northwest Passage will finally become navigable—a development shipping and oil companies might welcome, but one that would introduce added environmental risks to the region. Almost every aspect of life in the Arctic is tied to sea ice. The Inuit rely on the ice to provide hunting corridors. Polar bears take advantage of the whiteness of the pack ice to detect seals. And seals nurse their pups in dens built inside sea-ice ridges. All will have to adapt fast—if they can. “The important thing to remember,” says Barber, “is that we haven’t seen a seasonally ice-free Arctic in at least a million years. And we’ve gotten to this state in a very short time. There’s no historical precedent for what we’re experiencing.”

The implications extend far beyond the Arctic, a region that acts as a kind of giant heat exchange for the planet. Traditionally, the Arctic ice cover that persisted through summer would reflect back 95 percent of solar radiation, producing a cooling effect on the earth’s climate. Once the ice is gone, that heat will be absorbed by the ocean, returned to the atmosphere, and circulated around the planet. The result: more global warming.

As much as he would like to see these trends slowed, if not reversed, Barber believes it’s prudent to first learn more about the long-term effects of global warming on the Arctic ecosystem. To that end, he is spearheading the single largest Canadian project as part of International Polar Year. The $40 million initiative, involving scientists from a dozen nations, will study a phenomenon known as the Circumpolar Flaw Lead (CFL) system, which creates bodies of open water surrounded by sea ice even in the middle of winter.

Barber and his fellow researchers will be aboard the Amundsen this winter examining one such CFL system, near Banks Island, Northwest Territories. They will look at what is happening at every level of the ecosystem in a pocket of the Arctic to reflect what the entire region may look like a few decades from now. It’s groundbreaking science; borne, unfortunately, out of necessity rather than novelty. 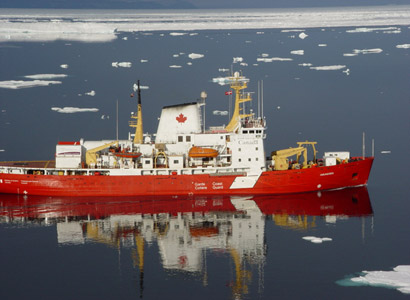 With confirmation that Arctic sea ice is disappearing at a faster rate than at any other time in history, David Barber’s sea ice research is important for a number of reasons. From the commercial side, shipping companies are ardently interested in his findings as they gauge how soon the Northwest Passage and other critical Arctic waterways might be open to seasonal navigation. For similar reasons, the Canadian Coast Guard also keeps abreast of his research.

On the cultural side, organizations like the Inuit Tapiriit Kanatami, which represents four Inuit regions in Canada, use Barber’s data to help make the case for how global warming is adversely affecting the traditional way of life of Inuit communities.

Barber’s research is of interest to the international community, particularly those trying to understand global-scale climate change, such as the Manitoba-based International Institute for Sustainable Development, and those trying to protect wildlife and their habitats.

Meanwhile, policy advisers like Michael Byers, Canada Research Chair in Global Politics and International Law, also keep a keen eye on Barber’s work. Major sovereignty and security concerns will arise from a navigable Northwest Passage, especially since the United States fails to recognize Canada’s claims over these waters. “If the passage isn’t going to be open until 2050, then there’s no immediate need for Canada to invest in a policing capability,” says Byers. “But if it’s expected to open within the next 10 to 15 years, then the time to act is now.”

And while government scientists tend to be more conservative about projections, notes Byers, researchers like Barber are pointing to evidence suggesting an ice-free Arctic summer may come sooner than many believe. “I’m increasingly convinced we are running out of time,” says Byers, “but I can’t be certain. So I’m extraordinarily grateful for the work Dave is doing in providing a scientific underpinning for current rates of sea ice reduction required for our policy analysis to work.” Only with the cold hard facts Arctic researchers are gathering, can effective and timely government policy take effect to protect Canadian waters.

David Barber’s strongest and longest collaboration is with Louis Fortier, Canada Research Chair on the Response of Arctic Marine Ecosystems to Climate Change at Université Laval. Fortier is scientific director of both CASES and ArcticNet. “Louis was the spark plug in getting CASES going,” says Barber. “His background is in biology and mine is in physics, so we complement each other.”

Barber also works closely with scientists from the University of Miami, the University of Alaska, the Norwegian Polar Institute, and with countless other researchers around the world through multidisciplinary efforts like CASES and ArcticNet. “That’s what makes our work unique,” says Barber. “We’ve had success in working in large groups and bringing these teams together, and the reason is we have this shared platform, the Amundsen. So collaborations become very real. You go out on deck and one person is sampling the bottom of the ocean, another is testing the water column, and yet another is off in a little boat studying the sea ice. Then they’ll all come together in the evening over a beer and share information. Networking is not an abstract thing for us. It’s a very real part of what we do every day in the Arctic.”

See what the Centre for Earth Observation Science is all about.