These eyes of mine

These eyes of mine

In a new twist on virtual reality, Laurentian University researchers are using hi-tech eyes to get a better view of the hazards of working in some of Canada's deepest mines
By Matthew Bonsall
Dream it. See it. Solve it.

The process uses the latest virtual reality technology to enable engineers to look deep underground and collect data that will help them design safer mines and mining equipment. The new high-tech eyes are proving invaluable in the quest to keep the nation's miners—most of whom work in small, dark spaces with large noisy machines—safe from harm.

"Humans are visual creatures. We are highly affected by what we see. Virtual reality is changing science from an exercise in crunching data, to a visual experience that extracts value from data," says Kaiser, President of Laurentian University's Mining Innovation, Rehabilitation and Applied Research Corporation (MIRARCO), and home to the Centre for Integrated Monitoring Technology (CIMTEC).

Now, what a miner sees with his own eyes can be splashed across a 3 by 7 metre screen at CIMTEC's virtual reality lab in Sudbury. So instead of crunching data to figure out what it's like to share a narrow tunnel with a load-haul-dump (LHD) vehicle, researchers in the lab can take a virtual ride underground to a world where the sightlines of an LHD driver can be analyzed from any angle.

Improving sightlines could go a long way to reducing the number of accidents involving heavy equipment underground. Between 1991 and 2001, LHDs were involved in over 1,500 accidents including 10 fatalities, according to the Mines and Aggregates Safety and Health Association. Working with industry, researchers are using CIMTEC's virtual reality lab to make LHDs safer.

An LHD driver sits sideways on the left side of the vehicle between a huge rear engine and a big bucket on the front. As the driver travels through a mine, his view can be blocked by a variety of things—the rocks in the bucket, the support posts of the cab, the wheel fenders, and tight corners in the mine tunnels. Safety investigators attributed five of the 10 fatalities involving LHDs to poor driver visibility.

To help improve the situation, researchers did a field study and surveyed LHD drivers to better understand visibility issues from the driver's viewpoint. Then they went underground to take laser-guided measurements. All this data was combined and entered into CIMTEC's virtual reality system to show where the view of an LHD driver was blocked. It then allowed researchers to simulate how different modifications to the LHD would affect sight lines. Replaying a scene with a modified LHD driving through a mine allowed design changes to be tested, while avoiding the cost of making physical modifications to an LHD. The same data can be reused for driver safety training.

The research projects promise to have a big impact on individual safety. Researchers are exploring the benefits of using virtual reality as a communication tool so the surface control group can see what a rescue team is experiencing in real time during an emergency. And CIMTEC is working with mining companies to use virtual reality to plan and design entire mines that are safer, cheaper, and more efficient to operate. "Designing a mine is more complex than designing a town," says Kaiser. With many mines boasting over 18,000 km of tunnels and a large refinery, most companies stand to benefit from a virtual approach to their very real discovery and design challenges. 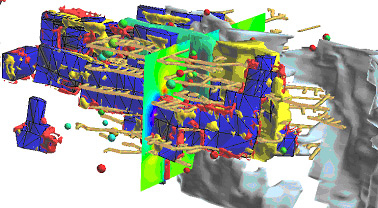 Every day, Canadians rely on products that come out of the ground. There are over 100 Canadian communities, with a combined population of 600,000, that depend directly on the mining industry. The numbers reinforce the fact that mining is big business. Canada has one of the world's largest mining sectors, producing more than 60 minerals and metals. In 2003, the total value of Canadian mineral exports reached $6.6 billion.

Now, researchers at Laurentian University's Mining Innovation, Rehabilitation and Applied Research Corporation (MIRARCO) are helping to keep Canada at the forefront of the global mining industry by using virtual reality as a tool to tackle challenges like safety, equipment design, mine planning, and risk management.

Laurentian University's Centre for Integrated Monitoring Technology (CIMTEC) is the only virtual reality lab in the world designed specifically for the mineral resource industry. The power of the lab lies in its ability to integrate complex mathematics in a way that lets users visualize information and make decisions based on what is seen—which minimizes the need for expensive trial-and-error processes. This can add up to huge savings in the mining industry, where project costs are routinely measured in the hundreds of millions of dollars.

The size and complexity of mining projects also means that teamwork rules. Virtual reality is an ideal way to bring diverse technical teams together to work on strategic questions and come up with solutions fast.

But solutions can also be found outside the lab. MIRARCO has a portable unit that can go to conferences and trade shows. And researchers are also linked to a virtual reality centre at a remote mine site so they can work directly and interactively with people in the field. Mining companies also use virtual reality as an investor relations tool to help explain complex subjects in a way that highlights investment opportunities and engages audiences.

"Virtual Reality and group visualization are powerful tools for policy-makers looking for a way to simplify debate over complex problems. It allows you to see the impact of things like environmental regulations or a new highway," says Andrew Dasys, MIRARCO's Start-Up Director.

MIRARCO is establishing a virtual reality facility at a university in China, and plans are in the works to open similar facilities in mining centres across Canada, and in Japan and Switzerland. Plans are also underway to expand CIMTEC's reach beyond mining to include projects in engineering, nuclear waste disposal, environmental monitoring, urban planning, equipment design, and even medicine.

Laurentian University's ability to attract the interest of every major mining company in Canada—along with several junior mining exploration companies—confirms the importance of the work being done by Peter Kaiser and his team to improve mine design and operation. It's a growing challenge. As Canada's miners penetrate deeper and deeper into the earth, often below 2,000 metres, the ground becomes less forgiving. Rock starts to break violently under the heavy load of the overlying ground. This high pressure can generate small earthquakes called "rock bursts." Identifying burst-prone areas is just one important research topic at Laurentian University's Mining Innovation, Rehabilitation and Applied Research Corporation (MIRARCO).

Mining giant Inco, for example, is working with MIRARCO researchers to help with mine hazard assessment and emergency preparedness at Creighton, its oldest operating mine. And Goldcorp, one of North America's most profitable gold companies, is working with MIRARCO through a linked virtual reality laboratory at its Red Lake Mine. The lab is used for exploration and mine planning. In the future, it will also be used for simulations designed to optimize safety, ventilation, and automation systems.