Sara Small and Ronan MacParland knew the health benefits of drinking green tea were well documented. Then they decided to find out if wearing green tea might also be good for what ails you
By Terry Collins 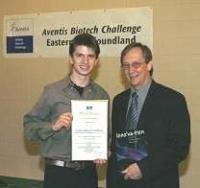 Modern medicine has hailed the ancient beverage's anti-oxidant properties, which can reduce the risk of cancer, heart disease, and premature aging. With that in mind, the two Newfoundland high school students wanted to investigate whether those compounds could also be beneficial when applied externally—as a skin cream.

Originally, the two students from Holy Heart of Mary High School in St. John's, Newfoundland were looking for a way to make use of something that's usually discarded. "We thought about used tea bags," said Sara, "and then settled on green tea because of its medicinal properties." They called their project Tea-rific Skin.

The first step was to extract the active ingredients called polyphenols from the three brands of green tea selected for the experiment—President's Choice, Lipton's regular and decaffeinated—using hot and cold ethanol extraction techniques.

The resulting chemicals were then subjected to a series of tests to determine their potential to cause mutation as well as anti-oxidant levels and UV absorbency. In all cases, the results were encouraging. The last step was to add the samples to a base cream and conduct more tests for UV, anti-oxidants, and mutogenicity.

"The tests showed that the cream had very good anti-oxidant properties, which indicates that it has the potential to prevent cancer and premature aging," said Sara. "But the most exciting result was that the cream is 100 percent UV absorbent, making it a very effective protector against the sun's harmful rays."

Sara says that although she and Ronan are excited about their discovery and its potential to become a commercial health product, their first love is not science but music.

"Both of us would like to pursue careers in music," she says, "but this experience has certainly opened our eyes to the challenge and excitement of scientific research. I think we're now looking much more seriously at the idea of studying medicine or science.

"The laboratory work was particular interesting and really gave us an appreciation of what researchers have to go through to develop the products we use every day." Not to mention a sure-fire formula for "tea-rific" skin.