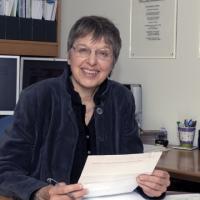 Carol Cass is an internationally renowned cancer researcher who is working with special proteins that help cancer-fighting drugs work their way inside cancer cells.
Carol Cass, University of Alberta

Carol Cass has seen cancer from all sides. The internationally renowned cancer researcher has spent four decades pioneering the study of special proteins called nucleoside transporters that help cancer-fighting drugs work their way inside cancer cells. She has also been an administrator at research institutes, and along the way, Cass became a cancer patient herself and lost family members and close colleagues to the disease’s many manifestations. “I come at this from a lot of perspectives,” she says. “And as a researcher, that’s been valuable, because cancer is so remarkably complex and complicated.”

Cass’s research career began in earnest in 1970 with what she describes as a “stroke of luck.” She followed her plant biologist husband David from California to what, to her, was then “an obscure university” in Canada’s northernmost capital city, Edmonton. Armed with a PhD in Zoology with a focus on cell biology, Cass quickly found work as a post-doctoral student with University of Alberta (U of A) pharmacologist Alan Paterson just a year after he became the first researcher in the world to discover the process of nucleoside transport.

At the time, drugs derived from groups of molecules known as nucleoside analogs were already being used to treat certain types of cancer. What Paterson and a graduate student named Jan Oliver had revealed was that these drugs depended on the presence of a transport process to effectively penetrate cells. While they were able to identify the transport process, the vehicle for making it happen remained a mystery. It would be another 20 years before the emerging field of molecular biology allowed Cass and her colleagues, James Young and Stephen Baldwin, to identify the proteins responsible for transporting nucleoside drugs.

After becoming the founding chair of the department of oncology at the U of A in 1996, Cass worked with John Mackey. An Edmonton-based clinician, Mackey spearheaded research into whether hENT1 could be harnessed to improve treatment prospects for pancreatic cancer patients, most of whom die within months of being diagnosed. By posthumously studying tissues from pancreatic cancer victims, Mackey found that individuals with high amounts of hENT1 survived two to three times longer than those with low levels of hENT1 — a clear indication that the presence of this transporter led to a better response to anti-cancer drug treatment.

U of A researchers are now working with Clavis Pharma, a Norwegian cancer drug development company, on a new hENT1 antibody aimed at improving treatment outcomes for pancreatic cancer patients.

Nucleoside drugs are also being used to treat other types of cancer, including breast, lung and colorectal tumours and leukemia. All of those drugs could benefit from employing protein transporters.

Cass is currently examining the structure of transporter proteins to better understand exactly how they work and how the presence or absence of a transporter affects the pharmacology of nucleoside drugs. She is also developing methods of testing protein levels in patients so that doctors can determine who might best respond to particular types of drug therapy.

Cass traces her increased interest in applied research both to her work as head of a major cancer hospital and to her own brush with the disease. In 1990, she learned she had a brain tumour that was wrapped around her optic nerve. She underwent a craniotomy and lost the vision in one eye. The tumour turned out to be benign. To this day, she has follow-up MRIs twice a year.

“Sitting in the waiting room with other patients has given me insight into their perspective,” says Cass. “It also makes you look at yourself and your life differently and at the relevance of what you do.”

An even bigger motivator, she adds, has been her administrative role at the Cross Cancer Institute. “When you take someone like me, who is from a pure academic culture, and drop that person into a working cancer-care centre, you can’t avoid dealing with issues that involve real people, many of whom have diseases for which there are not yet very good treatments.”

Working in the cancer field for 40 years has taught Cass the value of persistence — and the need to manage expectations. “I recall when [former U.S. President] Richard Nixon poured money into cancer research in the early 1970s, with the goal of curing cancer by the American Bicentennial in 1976,” she says. “Well, they didn’t even come close. Today, cancer is a very well-funded disease in terms of research, yet absolute cures are few in number because we’re dealing with such a complex set of diseases.”

Some cancers, she says, are now cured by surgery, while others — such as childhood leukemia — are either cured or managed with drugs. “But, at the same time, there are a number of cancers for which we don’t yet have good drugs, and in many cases, by the time the symptoms appear, the disease has spread so much it’s not possible to help people. We’ve made great progress, but there is still a long way to go.”