A symphony of science

A symphony of science 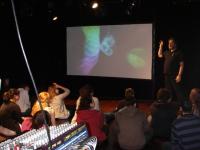 Words such as “laboratory” and “experiment” conjure up white-coated scientists mixing chemicals to better understand diseases like cancer or environmental challenges like energy consumption. We don’t usually picture a pianist, a playwright, a dancer or an acoustical engineer. When artists experiment, it’s called jamming.

But just as chemists untangle molecular mysteries to help improve our lives, so artists help us understand our mutable society through research and experimentation. And thanks to state-of-the-art computer, video and sound-engineering equipment at Canadian universities, the country has become a leader in music and multimedia research.

Composer Sandeep Bhagwati is helping solidify that reputation. As director of matralab (for Music/Movement/Media Art Theatre/Theory Research Agency Laboratory), a unique interdisciplinary research facility at Montréal’s Concordia University, he works to eliminate academic and cultural barriers so that some of Canada’s most creative people — from filmmakers to choreographers — can congregate, practise using new technology, share works in progress and produce films, soundscapes, scores, plays or dance performances.

“The lab touches on the special relationship between universities and the community,” says Bhagwati. “Why do communities need universities? In sciences, it’s hard to always make it clear. But in art, it’s obvious. Art is for people. It’s done to create performances that people experience, that change people’s perceptions of the world.”

The matralab, which opened in March 2009, is a versatile, multi-platform, fully wired studio space staffed by a technician who instructs its users. Student artists of all stripes, as well as professional artists from Canada and beyond, use the lab day and night.

Bhagwati’s latest offering, Nexus, debuts at Concordia’s Congress 2010 of the Humanities & Social Sciences, May 28-June 4. At around 5 p.m. on each day of the conference, as spectators exit lectures around campus, five musicians, interconnected via a wireless network, will begin playing the Bhagwati composition and walking toward a central location with a “Follow Me” sign on their backs. Those who follow will hear not only the musician in front of them but also the other musicians mixed and broadcast by Bhagwati through portable speakers attached to each player. It took months of practice, troubleshooting and technical wizardry, but Nexus, a real-time virtual ensemble, promises to redefine the live concert.

The set up at McGill's Schulich School of Music for the Virtual Haydn Live @CIRMMT Concert.
Sean Ferguson

The live concert will be redefined yet again in two years, thanks to Wieslaw Woszczyk. A sound and acoustics engineer and the founding director of McGill University’s Centre for Interdisciplinary Research in Music Media and Technology (CIRMMT), Woszczyk and colleagues are creating an audiovisual system called Open Orchestra, whereby a musician can virtually insert him or herself into an actual pre-recorded orchestral performance and play along. A practising clarinetist, for instance, would see on a computer screen the sheet music, the nearby musicians and the conductor — similar to a Rock Band video game for classical players.

“Can you imagine something like this for a student who is not in Montréal but somewhere far away, where it’s difficult to find someone to play with?” says Woszczyk. “This will be an important tool for that student.”

Tom Beghin in the Immersive Presence Laboratory of CIRMMT during recording of The Virtual Haydn Blue-ray discs.
Jacques Robert

As the first humanities facility funded by CFI in 2001, CIRMMT has evolved into one of the world’s premier music science labs. Members of the research group, who hail from several universities and many disciplines — electrical engineering, neuroscience, psychology and computer science, for example — use six different studios and labs to collaborate on projects ranging from behavioural and emotional responses to music to digital sound analysis.

Interdisciplinary collaboration drives CIRMMT, says Woszczyk, and has resulted in unique projects such as The Virtual Haydn, which involved measuring acoustic response in various rooms in Europe where Franz Joseph Haydn played or intended his music to be played and re-creating those unique acoustical signatures in the lab. Keyboardist and musicologist Tom Beghin then played period instruments at CIRMMT to simulate performances from two centuries ago.

Gilles Comeau would be more interested in what attracted Haydn to music and how long it took him to memorize music symbols when he was young. Comeau is coordinator of the University of Ottawa’s Piano Pedagogy Research Laboratory, the only facility in Canada devoted to piano education: how children learn, what motivates them and the physical impacts of playing.

Researchers use a range of tools to analyze a student’s piano playing, including infrared thermography, 3-D visualization and eye sensors to gauge movement. One particularly groundbreaking study is examining piano method books to determine how elements such as note repetition, music-symbol introduction and even book design impact music literacy. Some method books, for example, contain colourful pictures and cartoons.

“We’re now questioning that,” says Comeau. “There’s no doubt the beautiful pictures add to motivation, but what effect do they have on reading music?” When sight-reading, he says, some children’s eyes fixate on the images as much as 20 percent of the time.

None of these projects would have been possible without the research hubs built in the last decade and the superb variety of artists and academics who are drawn to them. “I work with colleagues who are experts in other fields, and that’s the most interesting part of working,” says Woszczyk. “There are a lot of things I don’t know, and I’m thrilled to have colleagues who inspire and learn from each other.”