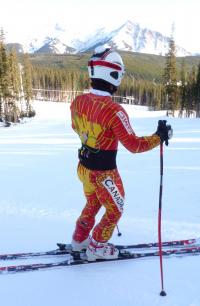 A skier dons the compact STEALTH equipment, in preparation for a test run.
Gérard Lachapelle

The average Olympic ski race lasts between 90 and 110 seconds, with skiers clocking speeds of up to 130 kilometres per hour. The difference between a gold-medal performance and a 10th-place finish is often measured in hundredths of a second. As University of Calgary geomatics engineering professor Gérard Lachapelle succinctly puts it, “It’s just insane.”

Lachapelle should know. In 2006, he and his University of Calgary colleagues at the Schulich School of Engineering’s Position, Location and Navigation (PLAN) Group were approached by the Canadian Alpine Ski Team to develop new technologies to help prepare racers for the 2010 Winter Olympics. The result was the Sensor for the Training of Elite Athletes (STEALTH), an ultraprecise, ultralight device that is allowing Canadian skiers to shave precious fractions of a second off their training runs by utilizing information gleaned from Global Navigation Satellite System (GNSS) signals.

The first device of its kind in the world, STEALTH represents the researchers’ best attempts to overcome two key challenges in recording and analyzing ski-race training runs. First, the device must be small and light enough to be worn without impeding performance. Second, it must be able to operate in an environment where ski slopes often block satellite signals.

They came up with a control unit weighing less than 280 grams that is worn on a skier’s belt and GNSS antennas weighing less than 150 grams that are mounted on the skier’s helmet. To mitigate possible signal interference on the slopes, STEALTH was designed to tap into both the U.S. space-based Global Positioning System (GPS) and its Russian counterpart, GLONASS.

Conventionally, training runs are videotaped, while a timing system set up at discrete points along the slopes measures the skier’s progress. The great advantage of STEALTH, says Lachapelle, is that through the course of a run, it provides continuous measurements of a variety of factors, including position, velocity and acceleration. It can also track how well a skier approaches or exits a particular turn or hill and suggest adjustments to maximize speed.

STEALTH can be used to test ski equipment as well. “You can take two sets of skis that are of the same model and from the same manufacturer, and they will perform differently from each other, given factors such as humidity or temperature,” explains Lachapelle. “So the equipment must be constantly tested and compared. With this device, you don’t need as many sample runs to decide which skis are best for a specific ski area.”

Canadian Alpine Ski Team coach James Perks says some of the athletes were initially skeptical about STEALTH because it involved strapping another piece of hardware to their bodies. “But when they saw the amount and detail of information it could provide, they quickly came around.”

Overall, STEALTH is credited with shaving between one and two hundredths of a second off an average run. “For us, a hundredth of a second is huge,” says Perks. “It just gives us that much more of an edge.”

Post-Olympics, researchers will investigate other applications for STEALTH. “Any type of sport that takes place outdoors and is sensitive to time and position could be a candidate,” says Lachapelle. “For example, one of our students has already experimented with putting a variation of the device on marathon runners to measure the impact of fatigue.”

The benefits may even extend beyond the sports world. Lachapelle points out that both the military and the agriculture industry make considerable use of GPS-based systems and that a highly portable version like STEALTH could prove useful. “When it comes to this technology,” he says, “we definitely see our work with the Canadian ski team as a beginning, not an end.”