By forecasting the weather in space, researchers at the University of Calgary hope to help minimize damage here on Earth
By Matthew Bonsall
Strong solar winds followed by meteor showers—not your regular weather forecast. But in outer space, it’s just another day.

Now, researchers at the University of Calgary say forecasting space weather could have a big impact on life here on Earth—and may even help to protect everyday devices and systems, from radios, to cell phones, to power grids.

Rain, sleet, and snow are familiar weather occurrences here on Earth. Space weather, on the other hand, is completely different. It’s made up of electrons and protons, two of the pieces, along with neutrons, that make up an atom. These particles are carried on solar winds from the sun in plasma clouds, which consist of freely moving electrons and ions formed at high temperatures. Most of the particles are deflected by the Earth’s magnetic field, but some enter the atmosphere.

“We want to understand the physics behind the response of our upper atmosphere to solar storms, and how we can anticipate and avoid some of their harmful effects”, says Andrew Yau, a professor in the Department of Physics and Astronomy at the University of Calgary.

The harmful effects of space weather include magnetic disturbances that can put satellites out of operation—affecting communications and navigation systems. They can also affect power systems.

Anticipating, and even preventing, these kinds of situations is helping to motivate a team of researchers led by Yau. They are developing the enhanced polar outflow probe (ePOP). The probe will study space weather in the ionosphere—the region about 100 km above the Earth between the upper atmosphere and the Earth’s magnetosphere—where the solar wind interacts with the Earth’s magnetic field and creates disturbances and dazzling light shows like the Northern Lights.

ePOP is a Canadian probe that will be part of the new Cassiope satellite due for launch in 2007, likely on a Russian rocket. Cassiope marks a new generation of smaller, more cost-effective satellites. ePOP will have a suite of eight scientific instruments, six of which are being designed and built in Canada, one in Japan, and one in the United States.

Through ePOP, the Canadian research team is responsible for a series of plasma imagers, radio receiver instruments, magnetometers, and cameras that will take measurements at resolutions never previously achieved. ePOP will also perform an almost real-time scan of the ionosphere in conjunction with radar stations on Earth. It will also be able to deliver data much faster than was possible with older satellites.

“ePOP will take advantage of a communications system called Cascade—the world’s first space-based digital courier service”, says Berthier Desjardins, the ePOP project manager for the Canadian Space Agency. This groundbreaking “courier in the sky” will support the transfer of up to 500-gigabyte digital data files, enough to fill up to 500 pickup trucks with paper.

With the Cassiope satellite as a platform, and Cascade as a courier, ePOP is positioned to give us a better understanding of space weather. That means one day, you could be checking your local weather forecast to see if a solar storm is headed your way. 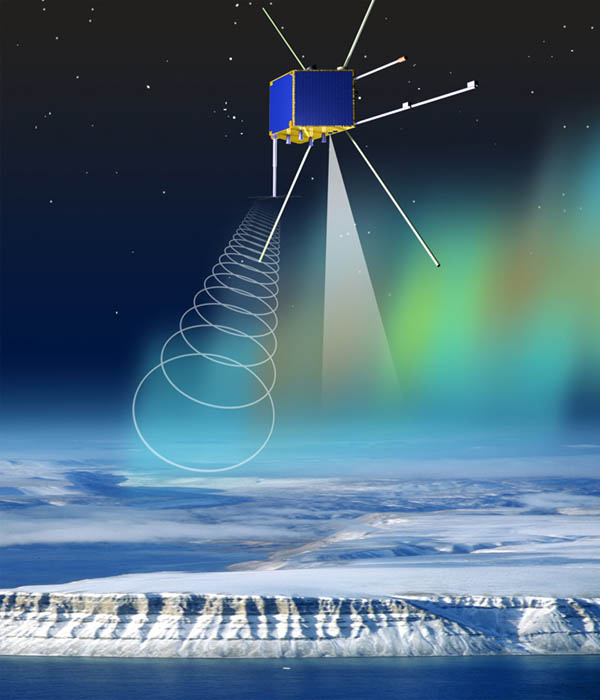 Space weather can cause magnetic disturbances that impair, or even knock out, communications equipment such as cell phones, navigation systems for airplanes, and power lines. Understanding space weather could help avoid some of these problems.

“If we know a solar storm is coming, we could temporarily switch off a vulnerable satellite and reroute its workload to another satellite,” says Andrew Yau. Yau and his team will use the enhanced polar outflow probe (ePOP) to help understand space weather and eventually improve space weather forecasting.

Understanding space weather could also help in other areas like space exploration. The same forces that affect technology such as Global Positioning Systems could pose a threat to astronauts and their equipment. If a mission to Mars is launched, these space weather threats will need to be understood and accounted for. And without even travelling all the way to Mars, understanding space weather may help us learn more about why Mars has lost most of its atmosphere, and if the same fate is ultimately in store for Earth.

Another application for Yau’s work relates to what he calls the “magnetic jerk”, when the North and South poles reverse. The magnetic North Pole has moved since its discovery in 1831. If it continues to move at the current rate, it will migrate from Canada to Russia in about 50 years. But a magnetic jerk would be much more serious and geological records show that this has happened in the past. If it happens again, navigation systems we rely on could be wrecked. Learning more about the magnetic forces at play in space weather could help solve the puzzle.

Space weather may also be linked to the climate we experience on Earth. Researchers know that solar storms have influenced long-term climate changes in subtle ways. With climate change on Canada’s environmental agenda, the more we understand, the better equipped we will be to protect our environment.

All this adds up to another important milestone in Canada’s quest to stay at the forefront of space research and development. “Projects such as ePOP help attract and retain the brains Canada needs to be at the leading edge”, says Berthier Desjardins.

The Communications Research Centre, located in Ottawa, the Institute of Space and Astronautical Science of Japan, and the U.S. Naval Research Laboratory are also partners in the project.

MacDonald, Dettwiler and Associates (MDA) of Richmond, B.C., Bristol Aerospace Limited of Winnipeg, and EMS Technologies are industrial partners in ePOP. The payload will be integrated into Cassiope, the joint Canadian science and telecommunications mission scheduled to fly in 2007.