When a young B.C. researcher hits the airwaves at MTV Canada , she proves that science can be music to the ears
By Tim Lougheed 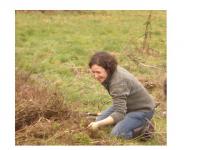 The 25-year-old University of British Columbia graduate student regularly appears on MTV Select , one of MTV Canada's frenetic, afternoon video programs. In between the pop star videos and the high-energy veejay antics, Randor gets a few calm minutes to introduce a generation of teenagers to the joys of science. That means piquing their interest in a range of topics, including soil ecology and the reproductive strategies of plants.Not typical fare on a network where other types of reproductive strategies command more attention. Randor's on-air and video segments are an attempt to educate MTV's young audience about the world of science all around them.

Randor, who is currently working towards her M.Sc. at UBC's Centre for Applied Conservation Research, slipped easily into her role as MTV host and science educator. She says the television work complements her interest in how teaching takes place beyond traditional educational settings. “I'm interested in finding ways to combine scientific research with communications and education,” she says. “I'm definitely thinking about how to take the really exciting scientific research that's being done all over the place and make it more accessible to people of all ages— especially kids .”

Randor says it's essential for the young MTV audience to understand the importance of science, and how a little bit of knowledge can help them make informed and intelligent decisions in every area of their daily lives. “A really good grounding and understanding in science can help them make decisions more responsibly,” she stresses, “that includes what to plant in their gardens, how to get around the city, and even who to vote for.”

Judging from the reaction from the audience and her MTV bosses, Randor seems to have struck just the right balance between entertaining and educating. “We feel she's a good fit, especially because she's a woman in the science field, and she's young and fun,” says Catherine Peterson, supervising producer of MTV Select . “She makes it quick and snappy. Anything that moves really quickly or looks different or has a sense of humour in it will appeal to our audience.”

Growing up in Hamilton, Ontario, Randor participated actively in a youth movement that dealt with social, political, and environment issues, all handled outside of anything resembling a regular classroom. By the time she was an undergraduate studying biology at the University of Guelph in 2001, she had joined a Public Interest Research Group and was organizing workshops to address scientific matters that have a broader social impact.

After moving to Vancouver in 2002 to pursue her M.Sc., Randor joined the Let's Talk Science Partnership Program, a national not-for-profit organization that works to improve science literacy through leadership, innovative educational programs, research, and advocacy. The Program has been serving the scientific community since 1991 by offering graduate students and researchers from all areas of science, medicine, and engineering organized opportunities to volunteer in local schools and communities. Participants like Randor lead hands-on activities designed to give children and youth an appreciation of these fields. They also serve as realistic and positive role models for young people. So when MTV came looking for a science host who could easily connect with its young audience, Randor was a natural fit.