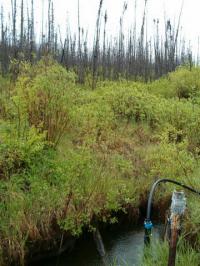 Canada is a country built on its logging and mining resources. Until fairly recently, however, there has been little information available to explain how these activities have affected the health of soils, rivers and streams in Canada’s Boreal Plain, a resource-rich region that blankets the upper half of the three Prairie provinces.

Ellie Prepas, a professor in the department of natural resource management at Lakehead University and Canada Research Chair in Sustainable Water Management, is working to change that. Working with government agencies, forest and energy companies and aboriginal groups, Prepas and her student research teams collect data and develop models that help forecast the impact of fires and tree harvesting on forest soils, biodiversity and water.

“Forestry gives us an excellent opportunity to see what forest alterations do to water quality and water quantity,” says Prepas. “It allows us to develop simple tools that can be used to make projections about what those changes will be.” 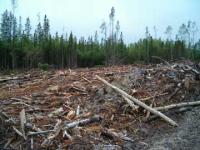 Prepas’ work began in the early 1990s at the University of Alberta, when new technology was enabling forest companies to target previously unmarketable tree species, such as aspen, on the boreal plain. But neither industry experts nor scientists could explain how harvesting these species affected surrounding surface waters. In 2001, she launched the Forest Watershed and Riparian Disturbance (FORWARD) project to figure that out.

Today, FORWARD’s two study sites — in the Swan Hills of Alberta and on the Canadian Shield northwest of Thunder Bay, Ont. — contain a number of dam-like concrete structures spanning the width of various study streams. The permanent structures, built with CFI funding, channel the stream’s water into a chamber containing instruments that provide data on flow volumes and collect water samples for further analysis. The structures ensure that there is a consistent collection of water and data throughout the year, before and after a fire or logging activity. FORWARD pioneered this unique method of long-term data collection.

The data-gathering has produced some surprising findings. For example, forest companies often leave a buffer of trees between watercourses and logging areas to prevent soil erosion and protect water quality. Prepas discovered that the buffers actually have little effect on the water quality and water flow of an adjacent stream. What matters more is the size of the disturbed area and the presence of wetlands. Prepas also found that current forestry practices do not seem to adversely affect frog and toad populations in disturbed areas. 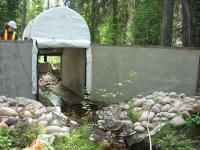 This kind of information has had ramifications in the resource industry. For example, forest companies used to plan their logging activities based mainly on the amount of harvestable wood in a given area. They would either clear-cut the area or harvest within discrete, but sometimes very large “compartments,” with little regard for watercourses.

Thanks to FORWARD, many companies now harvest within a watershed pattern that reduces the detrimental impacts on soils, streams and rivers. Instead of going into a specific area and harvesting at a high intensity, the cutting is now distributed more across the landscape. This prevents overharvesting in a watershed and ensures that water flow won’t increase over the long term.

Thanks to FORWARD, governments and industry now have more baseline data to help them make better forest-management decisions. The forest industry also has the tools they need to help plan their activities so they don’t contribute to flooding or excess soil depletion.

The next step for FORWARD is to continue collecting data at the Alberta and Ontario sites, and to refine and expand the current predictive models so they can be applied to a wider range of terrains and disturbances, such as the Alberta oil sands or forests ravaged by infestations of the mountain pine beetle.