Fidget. We’ve been told not to do it from the time we were young. And yet fidgeting could be the key to preventing pressure ulcers, also known as bedsores, which largely affect people with limited mobility.

Pressure ulcers are painful blisters or sores that form when constant pressure on a part of the body shuts down the blood flow to that area. This skin damage is an indicator of more serious injury in the underlying tissues, bones and joints.

“So why can able-bodied individuals sit in front of their computers eight hours a day and not develop a pressure ulcer?” asks University of Alberta researcher Vivian Mushahwar. “The difference is they fidget, and they do it all the time.”

Recognizing this critical difference is how the idea for Smart-e-Pants came about. Smart-e-Pants are specialized underwear equipped with electrodes that mimic fidgeting by using electrical stimulation to cause muscle contractions. “People subconsciously adjust their posture every six to nine minutes,” says Mushahwar. “This is something people who have no sensation or cannot move can’t do. We wanted to develop a technique that would restore this subconscious fidgeting to people who aren’t able to do it.” 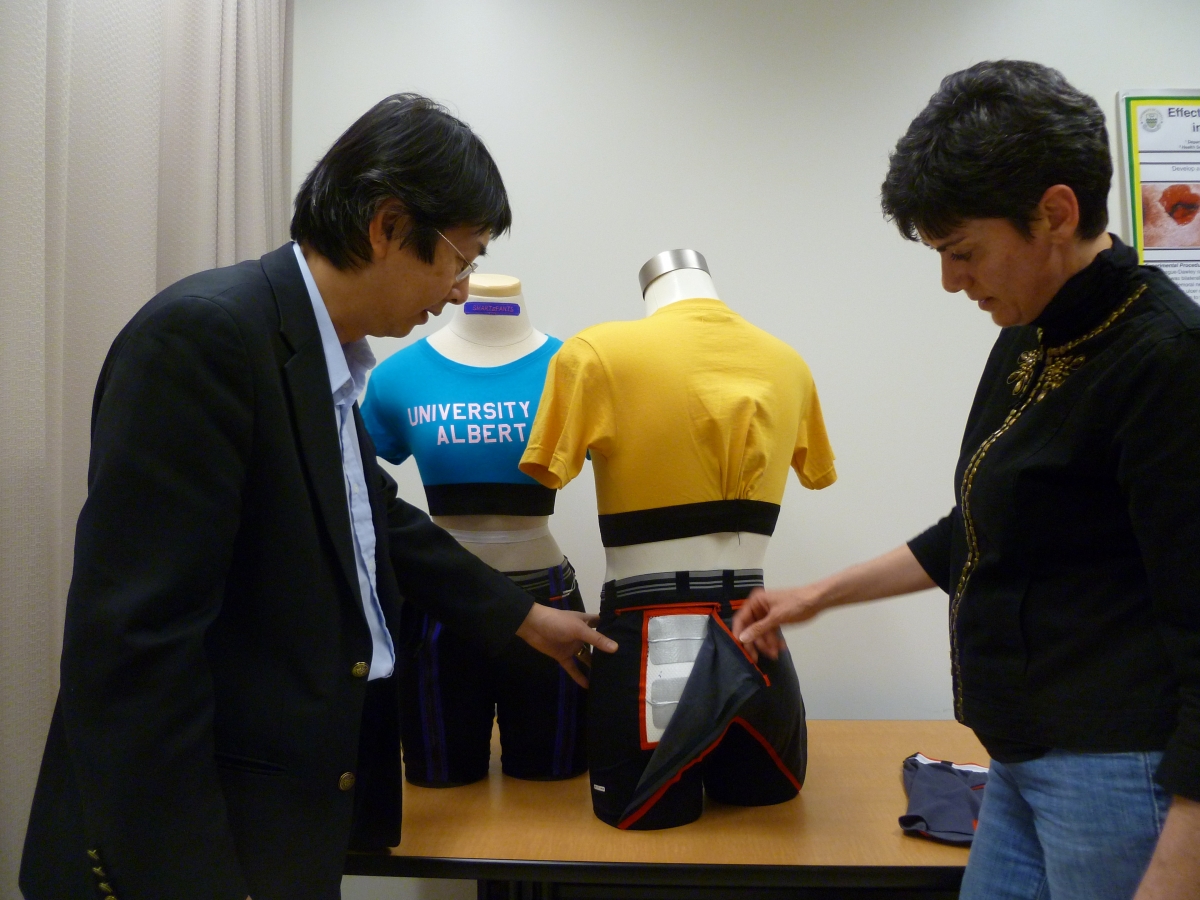 Vivian Mushahwar (RIGHT) and Ming Chan (LEFT) of the University of Alberta reveal the secret behind Smart-e-Pants: hidden electrodes that mimic fidgeting by using electrical stimulation to cause muscle contractions, thereby eliminating the wearer’s risk of developing bedsores.

The goal is to prevent pressure ulcers from forming. Mushahwar and her team focused on the muscles that were compressed for long periods of time while sitting or lying down. “The best way to deliver electrical stimulus to the pelvic region is by using an underwear-like garment,” she says. Hence Smart-e-Pants.

Mushahwar first learned about pressure ulcers through developing interventions to restore or improve function for people with spinal cord injuries. “Everywhere we went, it seemed there was a pressure ulcer to deal with,” she recalls. “Clients could not do anything in terms of rehabilitation because of pressure ulcers.” She and her team wondered why, with all the advances in technology and clinical care, pressure ulcers continued to be such a problem.

“The incidence rates for pressure ulcers haven’t changed from the 1940s,” she says. “That tells you this is a complicated, unresolved issue.” On average, the incidence rate can be as high as 40 percent. Up to 81 percent of spinal cord injury patients will develop a pressure ulcer. Those who develop one have a 90 percent chance of recurrence. This increases the risk of infection, blood poisoning and even death. And it’s estimated that Canadian hospitals spend a whopping $3.5 billion every year treating pressure ulcers.

Currently, people with limited mobility often use specialized wheelchair cushions and mattresses and do wheelchair exercises to reduce and distribute pressure. For patients who are unable to move, nursing staff change their position every couple of hours. But these techniques aren’t always effective because “the relief is static,” says Mushahwar. “It’s not dynamic, like fidgeting. You can reposition patients, but you can’t get their muscles to contract. Smart-e-Pants could fill the missing gap that seems to be in all existing interventions.”

Mushahwar and her team have completed pilot testing with 25 patients to determine whether Smart-e-Pants are compatible with various clinical environments and whether this is a system that users would actually want to use. They addressed questions of stability, feasibility and safety. “So far, Smart-e-Pants are acceptable for clinicians and end-users,” says Mushahwar. “They seem safe and stable, but we’re still modifying the product based on the feedback we get.”

Mushahwar and her colleagues are now coming up with the best stimulation parameters for Smart-e-Pants and securing funding to conduct larger clinical trials to verify their effectiveness.

Originally from Palestine, Mushahwar completed her undergraduate degree in electrical and computer engineering in 1991 at Brigham Young University in Provo, Utah, and her PhD in bioengineering in 1996 at the University of Utah in Salt Lake City. She moved to Alberta for additional post-doctoral training at the University of Alberta in 1998. When she was deciding what to do after graduation, she came into contact with a number of young people in wheelchairs who had been injured during the political unrest in Palestine. “I thought about how electrical engineering could be used for people with spinal cord injuries to improve their quality of life.”