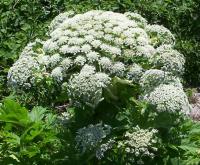 As alien invaders go, the giant hogweed is particularly nasty. The weed spreads quickly, growing up to seven metres high, and defends itself by spitting a toxic sap — a gooey concoction that causes painful skin blisters that last for weeks and purple scars that can remain visible for several years. Hospitalization and even blindness can result from tangling with giant hogweed. This is one mean plant.

Giant hogweed is just one of many insidious alien invaders trying to gain a foothold in eastern Canada in recent years. Venomous fire ants have overrun urban lawns, and parasitic nematodes living in the swim bladders of eels have the potential to devastate East Coast eel populations. And there is a cast of many more unwelcome invaders taking up residence or en route, including the Japanese skeleton shrimp, the European green crab, purple loosestrife, sea squirts and rock snot.

One Cape Breton University scientist is fighting back with a program to warn the public to be vigilant against the onslaught. Project UFO (Unidentified Foreign Organisms) is the brainchild of Martha Jones, a biologist who specializes in studying how environmental stresses affect aquatic animals. Jones came to Cape Breton seven years ago to study the infamous Sydney Tar Ponds, a toxic-waste dump left from the city’s steelmaking days.

“It gave me a much better understanding of how human activity can affect an ecosystem,” she says.

That led to an interest in non-indigenous species — a major environmental concern that doesn’t get nearly enough press, according to Jones. She started Project UFO in 2008 as a way to educate the public about the problem, using public-awareness tools such as a website and a Twitter page. She also promotes the project at conferences and to the media. 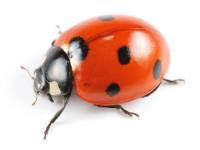 Native throughout much of Europe and central Asia, the seven-spotted lady beetle (Coccinella septempunctata) was released across North America between 1956 and 1971 as a biological control agent for aphids. It has since become a pest species.

The first goal, says Jones, is to teach people a little basic biology. “If you’re going to train citizens to look out for alien species, they first need to know what native species are here.”

Project UFO encourages people to observe and report the alien species they see. It also teaches them how they can avoid being part of the problem. The childhood ritual of capturing tadpoles, crayfish or minnows and releasing them into different waterways can be disastrous to an ecosystem, as can practices like not properly drying fishing tackle before moving on to a new body of water. The deceptively beautiful giant hogweed first became established in Canada by masquerading as an innocuous garden flower. And some invasive species have been part of the North American landscape for so long — the seven-spotted lady beetle and the common periwinkle, for example — that most people don’t even realize they were European imports.

“Currently, there’s no standing provincial policy on how we should manage invasive species in Nova Scotia,” says Jones. “It’s all very ad hoc. We need a strategy to deal with the problem in our region.”

But for now, the public is the best front-line defence against alien invaders. Jones believes schoolchildren are especially important in the fight. Project UFO’s distinctive logo, which features a crab piloting a flying saucer, is geared toward young people. And Jones and her colleagues are currently developing a Project UFO curriculum for grade-six students in Nova Scotia.

“Let’s face it, it’s hard to get adults interested in this subject,” says Jones. “It’s a lot easier to get kids involved. It’s like the recycling movement. That began with children learning how to recycle in school and going home and showing their parents how to do it. We think we can do the same thing with alien invaders.”