Power to the people

Power to the people

A computer science student is helping wheelchair-bound seniors help themselves
By Chad Hershler
University of British Columbia (UBC) PhD student Pooja Viswanathan grew up in a comfortable suburban home outside Mississauga, Ont. Her grandparents lived with the family and were a daily part of her life, so when, as a teenager, she got her first glimpse into the hallways of an old-age home, it left her reeling. “You see so many people slumped over in their manual wheelchairs struggling with simple tasks,” Viswanathan recalls. Now, at 26, the computer science graduate is focusing on artificial intelligence is to develop a “smart wheelchair” that could help seniors become more independent.

Called Navigation and Obstacle Avoidance Help (NOAH), Viswanathan’s creation combines a stereovision camera with computer software to turn any commercially available powered wheelchair into a quasi-robotic device that can move its user from point A to point B, avoiding obstacles along the way.

Current provincial and municipal driving regulations don’t permit people suffering from cognitive impairment to use powered wheelchairs, because of the inherent safety risks. But 60 to 80 percent of patients in nursing homes suffer from some form of dementia, and Viswanathan believes NOAH could offer them a taste of independence. “Reduced mobility leads to depression and isolation,” she says. “That’s the reason for the powered wheelchair. We want to make it safe for them to use and get around.”

As a summer intern at the University of Toronto’s Intelligent Assistive Technology and Systems Lab in 2006, Viswanathan discovered that a stereovision camera — which utilizes two lenses and functions much like the human eye — was able to assess where and how close objects were in its path. Computer software could then direct the wheelchair to move accordingly.

Other technologies used for the same purpose, such as laser and infrared, proved to be noisy, sensitive to sunlight and potentially risky to the user, but Viswanathan determined that the stereovision camera is safe to use and can operate in a natural setting. She felt she had discovered the perfect match for the wheelchair: a computerized camera that could work anywhere its user needed to go. 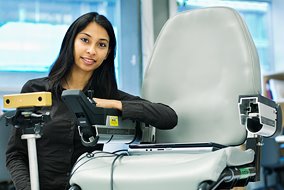 Pooja Viswanathan and the smart wheelchair she developed for Alzheimer's sufferers

“This is a device that really would make a difference to people in long-term-care facilities,” says Alan Mackworth, one of Viswanathan’s PhD supervisors at the UBC laboratory where she is continuing her research on NOAH.

Two NOAH prototypes have been built, one of which is currently being evaluated in a Toronto-based clinical trial. The trial is also testing the latest software, which enables the computer to assess the cognitive state of its user. For the wheelchair to function successfully, says Viswanathan, the computer must be able to adapt to the diverse needs of its users.

“I intend to work with kids with disabilities,” she says, her voice rising with excitement. “There’s evidence this technology could help with autistic children.”

This dedication reflects Viswanathan’s belief that computer science belongs outside the laboratory at the fingertips of those who need it the most. “Pooja’s a unique computer science student,” says Mackworth. “Her goal is to translate her work into something useful for society.”