One in seven Canadian women suffers from postpartum depression. A New Brunswick researcher is looking for ways to help them - and their spouses.
By Anita Lahey 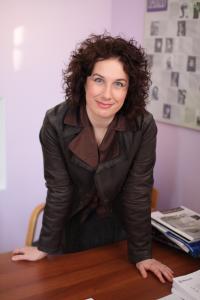 When Nicole Letourneau’s second child was born with cancer in 2001, she was, in theory, well equipped for such devastating news. As a nurse, her graduate studies had looked at aspects of family care, such as the impact of a mother staying overnight in hospital with her sick child. She had also worked in pediatric intensive care. But it soon became clear that her own health was compromised: she was depressed.

Letourneau’s son recovered, but the experience rerouted her research interests. Intimately acquainted with the debilitating effects of postpartum depression,  Letourneau, now a Canada Research Chair in Healthy Child Development at the University of New Brunswick, became frustrated when finding that nearly half of mothers diagnosed with postpartum depression (PPD) receive no help. She discovered that they are often hindered by the cost of medication, long wait times for counselling — up to six months in some regions — and a dearth of resources in rural areas.

Even women close to support services will often not use them. The symptoms of postpartum depression, such as fatigue and lack of interest in daily activities keeps them at home. Their babies, affected by the inconsistent care that accompanies low energy and mood swings, can become more anxious, aggressive and hyperactive than other children and later fare poorly in school.

Determined to break this pattern, Letourneau conducted a survey in 2003 of mothers in Alberta and New Brunswick who had recovered from PPD. Her question: What could help these women that is accessible and cheap?

Two answers emerged. First, other mothers — not their own — that the women could talk to; and second, their partners. “The women said they relied on their partners more than anyone,” says Letourneau, “and if only their partners knew what to do, they would have done it.”

Letourneau could relate. “If my husband had known what was going on, we probably would have gotten help sooner,” she says, recalling her own depression. “He’d have known the marriage wasn’t breaking down; it was his wife who was breaking down.” Her research began to reveal that fathers were a huge untapped resource. “They’re sitting right there, and no one is saying, ‘Here are some things you can do to help.’ Or even, ‘How are you doing?’”

In 2009, Letourneau began interviewing fathers in Alberta and New Brunswick whose spouses had shown symptoms of PPD. She learned that the men themselves had anxiety, sleep troubles, irritability, appetite loss and, in some cases, even the impulse to harm their wife or child. In the face of their partner’s distress, they felt helpless and uninformed. Indeed, studies show that the partner of a mother with PPD has a 25 to 50 percent chance of suffering depression himself.

Letourneau’s new insight led her to initiate a larger study. With the help of a nationwide advisory committee, she will conduct interviews with 90 more fathers, asking them the kinds of questions she’s already asked mothers, such as: What kind of help do you need? What’s stopping you from getting it?

“Whatever dads tell us should exist,” she says, “we’re going to create.”

Meanwhile, New Brunswick mothers will soon have a number they can call for help. On the other end of the line: another woman who has suffered PPD. The free service will be unobtrusive and hassle-free. “If you have a phone,” says Letourneau, “you’ll be able to get help.”

All this is good news for babies. “This is a mental condition,” says Letourneau. “It’s going to pass. If both mothers and fathers had some tools, they would not blame each other, and they could focus their energies on something else. It propels me forward, the more I think we’ve got a handle on this, for the sake of the kids.”