On the 10th anniversary of the Walkerton tragedy, an Acadia chemist has created an innovative system that could help prevent similar drinking-water contamination
By Tom Mason

The Walkerton disaster of May 2000 was a cautionary tale for all Canadians concerned about the safety of their drinking water. When a deadly strain of E. coli from farm runoff contaminated the Ontario community’s water supply, seven people died and nearly half the town’s residents became ill before anybody discovered the source. Now, a decade after the tragedy, a chemistry professor at Acadia University, in Wolfville, N.S., has invented a sophisticated new monitoring and treatment system to ensure this never happens again.

Anthony Tong’s water-monitoring sensor works in real time, constantly scanning for target organisms in the water supply and sending off alarms the moment toxins reach unacceptable levels. The device eliminates the need to transport water samples to laboratories, where it can take days or even weeks to complete a test. “Testing every two weeks isn’t enough,” says Tong. “When you’re talking about a water supply, real-time management is critical.”

Tong’s sensor uses a technique called fibre-cavity ring-down spectroscopy. A water sample is drawn into a sensing region in a long fibre optic cavity with two mirrors attached on the fibre ends. A laser pulse fired at the sample bounces back and forth between the two mirrors at the speed of light, while sensors look for the optical properties of target toxins every time the beam hits them — a process magnified by the mirrors. “If the beam bounces off the toxin molecules 1,000 times in a nanosecond,” says Tong, “it is 1,000 times more sensitive.”

The result allows a computer program to monitor for the presence or, in some cases, the absence of bacteria. “Sometimes, as in the case of drinking water, we don’t want any bacteria in a system,” says Tong. “In a situation like a waste-water treatment facility, we want lots of bacteria.” Total bacterial concentrations are critical for breaking down waste substances.

The waste water that spews daily out of our cities and industrial sites contains a deadly toxic soup, says Tong. Pharmaceuticals excreted from our bodies often end up in the environment, where they can affect fish, frogs and other wildlife. To complicate matters, proteins in our bodies react to the drugs we ingest to produce new chemical compounds that can have complex effects on the environment. The shopping list of chemicals we use in our daily lives often ends up in the water cycle, and pesticide runoff from farms has also become a major source of environmental contaminants in recent years.

Tong’s waste-water treatment technology is called membrane bioreactor. It is a biological treatment technology where bacteria are used to decompose organic waste. A polymer membrane filter with pores 20 to 30 nanometres wide allows the water molecules to escape, leaving bacteria and other microscopic particles trapped inside the reactor. 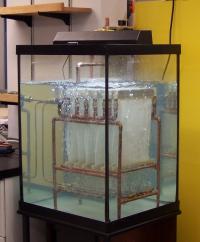 The system will be able to clean up all these toxins and contaminants. For now, Tong is using two prototype reactors to test his system. The technology will go into action this summer at a Nova Scotia agricultural facility that produces compost waste water. “Treatment of municipal waste water is relatively easy,” says Tong. “The real challenge will be how it handles industrial waste water.”

Once the field testing is completed, Tong’s system will go into full production, some time in the next year. The global demand could be huge. “Most small and medium communities and industrial companies in the world do not have any monitoring or treatment facility for their waste water,” he says. Most significantly, the bioreactor will be small and affordable — within the budget of even the smallest of municipalities and industrial facilities.

Water utilities and waste-management facilities will be the first target market, but Tong says the technology can be used to test virtually any liquid source. Pharmaceutical manufacturers, composting facilities, oil refineries, offshore petroleum platforms and other industrial operations are potential customers. He already has an idea for a prototype that could be installed on a ship to help clean up oil spills like the recent disaster in the Gulf of Mexico.

In the meantime, Tong says he will continue quietly developing his sensors and bioreactors in his university laboratory, leaving the marketing and production of his technology to others. “I have industrial partners who will manufacture, commercialize and distribute the systems,” he says. “I don’t see myself running a company. I’m a scientist. My job is to make the technology work the best way possible, and I love what I’m doing. This technology will be very important, and I believe it will have a big impact on the world.”