The war on terror has valuable allies on Rue Saint-Jean-Bosco in Gatineau. Operating out of the Centre de recherche en photonique (CRP) at l'Université du Québec en Outaouais (UQO), a research unit led by Dr. Wojtek J. Bock is hard at work developing a highly sophisticated weapon: an optical sensor with explosive-detection capabilities.

Let there be light

Dr. Bock has been with UQO for more than 20 years. “In 1985, we started from scratch,” he recalls. “Today, we have a research facility worth about five million dollars and many collaborating partners in Canada and abroad,” he notes, referring to contacts in China, Bulgaria, Poland and Italy. Professor Bock, a Canadian of Polish origin, holds five patents and has authored some 240 publications. His specialty and passion is photonics, a science most commonly associated with components used in the production, detection and transmission of visible and invisible light. Conventional applications range from optical scanners in your local supermarket to video projectors, laser pointers, laser welding, laser drilling and laser mapping.

But the potential uses of photonics far exceed these everyday conveniences. As Canada Research Chairholder in Photonics, Dr. Bock began investigating more advanced optical sensor applications in 2006. The basic principle he is exploring is that a thin polymer coating can render optical fibres sensitive to certain biochemical parameters, such as hazardous molecules. Dr. Bock hopes his research will result in the next generation of fibre-optic sensors, capable of detecting minute quantities of explosive substances.

Prevention and detection in airports

This research has attracted widespread attention, in military circles as well as among civil authorities. One of the most logical and practicable uses of the new optical fibre technology would be in airport security. “The advantage,” explains Professor Bock, “is that the sensor can be placed quite far from the security area where passengers are searched. It can be embedded in a wall, undetected, because optical fibres can transmit information over a long distance.” 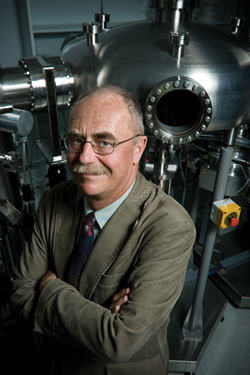 But nothing is ever simple in the field of research. One of the challenges for Dr. Bock and his team is that while bombs emit certain molecules, so do other more innocuous products. “Perfume emits molecules,” points out Dr. Bock. It would be a slow and arduous task to search all bags containing Chanel No 5. So the UQO-made sensors will also have to be able to discriminate between “harmless” and “harmful” molecules.

Meanwhile, work continues in the CRP’s “cleanroom”, a state-of-the-art, contaminant-free lab the research team calls home as it strives to perfect the process for coating optical fibres with the thin polymer film that will give them the capability of detecting the target molecules.

In addition to the ability to detect explosive substances, there are many other advanced uses for optical sensors, one of which is to measure water pollutants. In a paper recently submitted to the Quebec Department of Economic Development, Innovation and Export Trade, Dr. Bock explains that the presence of pollutants (such as nitrates, phosphates and pesticides) in ocean waters can be detected by optical methods, based on the absorption and fluorescence of certain polymers in the marine environment.

So will all these efforts bear fruit? “We’re definitely on the right track,” concludes a confident Professor Bock. “We can’t be sure of the end result, but the same can be said of all true research.”

The infrastructure for this project was partially funded by the Canada Foundation for Innovation.