The transformation of UBC's Museum of Anthropology
By Ryan Stuart 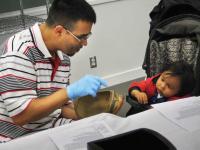 In the Ethnology Research Room, families can learn about the history of the museum artifacts by examining them up close.

While the recent major renovations to the University of British Columbia’s Museum of Anthropology (MOA) involved plenty of additions and upgrades to its infrastructure, it’s the way people can now use the space that’s really transformed it.

When MOA moved from the basement of the UBC Library into its own building in 1976, then Director Harry Hawthorn and his wife, Curator Audrey Hawthorn wanted the collections to be as accessible as possible. Together, they helped develop new display cases and new experiences for visitors. So it’s no surprise that when the museum embarked on its first major expansion and renovation since its opening, the Hawthorn concept of access was not forgotten. From glass-walled research rooms and comfortable “community” spaces to a modern spin on visual storage, the museum’s $55.5 million renewal, partially funded by the Canada Foundation for Innovation (CFI), has resulted in one of the most accessible and welcoming museums anywhere.

The Multiversity Galleries (ABOVE) have over 10,000 artifacts on display in a manner more accessible to visitors.
Ema Peter Photography

“MOA was always known as an innovative and creative educational museum,” says Moya Waters, the museum’s associate director. “The renewal has brought us to the lead in the 21st century in terms of what we can, and will, do here.”

The new Multiversity Galleries, for example, permanently house over 10,000 artifacts. As part of the update of the original visual-storage concept, many items were remounted to make them easier to handle and view. In addition, the museum’s entire collection has been digitized and loaded into touch screen terminals dispersed throughout the galleries, allowing visitors to browse through objects not on display.

MOA’s digitized records are also fundamental to its Reciprocal Research Network (RRN), an online database that serves as a new way for aboriginal groups to connect with their heritage. “So many heritage artifacts were removed from First Nations communities and taken all over the place — first by European explorers and later by Americans,” says Susan Rowley, the curator in charge of the RRN. “How can people find their heritage? How can they access it?” 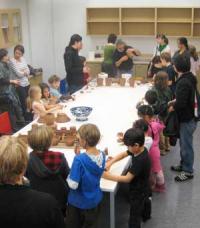 To address this problem, MOA partnered with the Musqueam Indian Band, the Sto:lo Nation/Tribal Council and the U'mista Cultural Society to create an online database of First Nations artifacts and an online social media site where the artifacts can be viewed, studied and discussed. Museums in Canada, England and the United States have helped develop the network and contributed data to it. More museums are continually being added. A steadily growing membership of 1,000 students, academics, curators and First Nations is now able to access more than 225,000 objects online. While the RRN is currently focused on B.C. First Nations, there are plans to expand. A group of Inuvialuit from the Mackenzie Delta area, for example, is using the RRN to help access a major collection of its material culture housed at the Smithsonian Institution.

To facilitate the physical study of museum artifacts, seven labs were built in partnership with the university’s anthropology department. The state-of-the-art suites are already attracting world-class talent, says Rowley.

“The suites are totally transformative,” she says. “Huge numbers of students and academics want to do research here now.” In addition, a new wing, the Centre for Cultural Research, was built. Five glassed-walled research rooms provide space for classes, groups, artists and researchers to experiment and study — where their work is visible to museum visitors.

Embedded in the Multiversity Galleries is a multimedia Presentation Circle, where visitors can hear talks and view videos on a variety of topics related to aboriginal culture and tradition.
Ema Peter Photography

The wing also includes a community lounge, where First Nations elders and First Nations groups can discuss artifacts and art in a comfortable space. “A lot of people are intimidated by museums,” says Waters. “This space is more casual. They can relax here.”

MOA is also home to a collection of First Nations ancestral remains, which are now cared for and housed in a new room in the Lab of Archaeology. Clad in cedar, the space is more respectful of the remains as compared with a scientific lab. “The people who come in to visit their ancestors tell us it is a totally different experience,” says Rowley. “It has reconfigured our relationship with these communities.”

Rowley is currently working with the Sto:lo Nation to repatriate its ancestors’ remains. “Because of their positive experience at the museum, they’re now asking about what analysis we could do on the remains before returning them. They feel more empowered because we’re not treating their ancestors like objects.”

Funding from the CFI was used throughout MOA. It contributed to the Centre for Cultural Research, a behind-the-scenes storage and staff area; the Audrey & Harry Hawthorn Library & Archives; several labs; the Community Research Suite; and the Multiversity Galleries. In addition, CFI funds helped MOA digitize and store the work included in the Reciprocal Research Network. “The CFI funding was the catalyst for the whole project,” says Waters. “It couldn’t have happened without CFI’s support.”