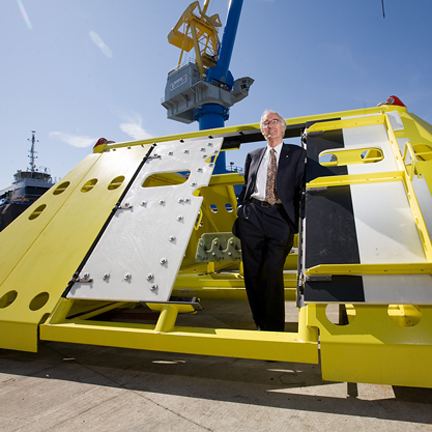 The winch at the rear of the ship slowly lowers a 13-tonne steel capsule about the size of three minivans into still water in early July. The shell, painted a garish yellow, is a trawl-resistant frame designed to deflect fishing nets. More important, once settled on the ocean floor, the capsule will protect the sensitive power and communications equipment located inside. Think of it as a wall plug under the sea that runs electrical and Ethernet systems.

At the Esquimalt Graving Dock at the naval base outside Victoria, B.C., the crew of the C/S Lodbrog — a converted ferry owned by an arm of telecommunications company Alcatel-Lucent — demonstrates how the capsule, called a node, will be settled into the ocean later this summer. Doing so while anchored to a jetty in a sheltered harbour is easy. It will take a bit more nerve on the rolling waves of the Pacific.

Installing the nodes is a key final element in the completion of the world’s largest ocean observatory, known as NEPTUNE Canada — for North East Pacific Time-series Undersea Networked Experiments. The project involves attaching five nodes to an 800-kilometre loop of powered fibre-optic cable — long enough to stretch from Toronto to Ottawa and back — that was placed on the ocean floor two years ago.

Following this work, a crew on the R/V Thompson will install an initial suite of more than 100 instruments on extension cables running out from these nodes. And by the end of the year, researchers will be studying events in the ocean as they occur. This unparalleled window on the ocean floor will also be open to the public via the Internet.

“At the moment, big ships put instruments down to the seabed and get a snapshot,” says Peter Phibbs, NEPTUNE Canada’s associate director of engineering and operations. “Mostly, they’ve collected little vignettes over the years. If you’re down there all the time, you can see change as it happens.”

Essentially, it is the difference between a scrapbook of still photographs and a high-definition film.

NEPTUNE will allow for the real-time study of plate tectonics, the movement of seabed fluids and the effects on marine ecosystems caused by climate change and will help pinpoint earthquakes and observe the resulting seismic stresses.

Sea-floor pressure sensors are expected to improve our understanding of the movement of tsunamis through deep-ocean and coastal areas. The improved knowledge of ocean currents will also help in handling such man-made disasters as oil spills and ship collisions.

It is not easy to build an observatory under the water. The shallowest instruments will be placed on a rocky pinnacle just 17 metres below the surface, while the deepest node will sit on the abyssal plain, 2.7 kilometres down.

The Barkley Canyon node, hangs from the Lodbrog winch, ready for its journey to the ocean floor, 650 metres down.
NEPTUNE Canada

While planning NEPTUNE, scientists faced a dilemma familiar to anyone warned about dropping a hair dryer into the bathtub. How do you get electricity to a node that is underwater? The answer is a connector in which vegetable oil displaces salt water to create a safe electrical connection. The node and instrument components are also encased by a corrosion-resistant material such as titanium.

A total of 10,000 volts of direct current flow along the 800-kilometre loop of cable — a lot of power, considering that the average household socket handles 120 volts. On land, such a system would quickly overheat, but on the sea floor, the 2°C water keeps the nodes cool. Each node decreases the voltage to power, without shorting, such carefully calibrated instruments as hydrophones, seismometers,  video cameras and high-resolution still cameras. Other instruments will measure salinity, carbon dioxide and even the movement of organisms in the sediment. More instruments can be added in the future as initial data generate more questions. If it happens in the ocean, NEPTUNE scientists want to know where, why, how much and what changes over time.

The cable houses a fibre-optic network that will deliver reams of data to a station at Port Alberni, on Vancouver Island, and then transmit it by high-bandwidth Internet to the University of Victoria, where it will be accessible through neptunecanada.ca.

The Barkley Canyon node begins its journey to the ocean floor, 650 metres down.
NEPTUNE Canada

The data management and archive system used by NEPTUNE also supports VENUS (Victoria Experimental Network Under the Sea), a coastal network of cabled underwater observatories. VENUS began operations in the Saanich Inlet near Victoria in 2006 and in the Strait of Georgia, between Vancouver Island and the mainland, in 2008. More than 200 people from a dozen countries use VENUS data, which include such information as the nightly upward migration of zooplankton.

At a demonstration of NEPTUNE in July, Phibbs was asked why the general public should be concerned with what happens at the bottom of the Pacific. “Why should they care? A huge amount of the Earth is covered by oceans,” he said. “How the oceans change affects what happens on land.”

Much of what occurs underwater remains unknown. Oceanographer John Delaney, whose brainchild this is, has described the project as “a Hubble telescope of inner space.” The ocean is a last unexplored frontier right here on Earth.

As well as studying earthquakes and tsunamis, NEPTUNE scientists will also examine gas hydrates — cages of ice containing methane. It is thought the potential energy within gas hydrates equals the world’s hydrocarbon reserves. The problem is, the extraction of the gas could contribute to global warming.  As part of NEPTUNE, German scientists have developed the world’s first Internet-operated deep-sea crawler. Nicknamed “Wally,” it will study gas-hydrate deposits by collecting data on methane concentrations, changes in hydrate distribution and other factors.

The size of an all-terrain vehicle, Wally has dual tractor treads, giving it plenty of mobility on the sea floor and providing scientists, as well as the rest of us following on the Internet, a live moving image from the bottom of the sea.

The innovations sparked by overcoming the challenges of making NEPTUNE work properly are expected to find commercial application in such fields as communications, aquaculture, hydroelectricity, port security and the extraction of subsea oil.

“This is our planet,” says Mairi Best, NEPTUNE’s associate director of science. “We live on a little scrap that’s above the water. The planet is run by the oceans. Yet we know so little about how they work.”

NEPTUNE and VENUS will provide an unprecedented look at the ocean, creating the possibility of a better understanding of our world and how to repair it.

“For now and the future,” says Best, “our imagination is the only limit.”