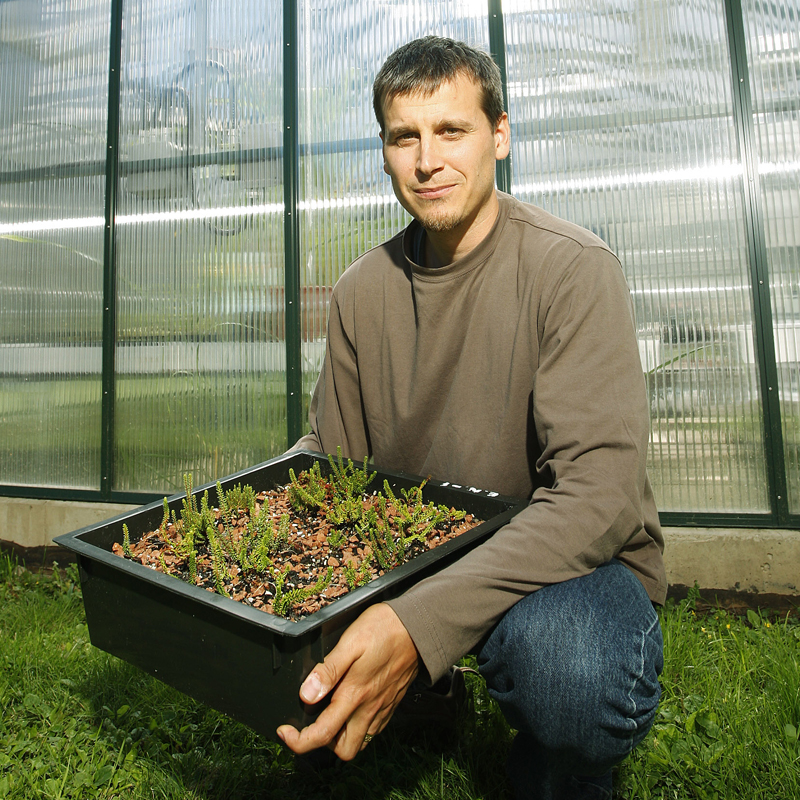 Halifax ecologist Dr. Jeremy Lundholm envisions cities of the future looking radically different from what exists today. The most striking change would be greener cityscapes. “When I see buildings, I see potential habitat for plants and other living organisms on any given surface,” says Lundholm, an assistant professor of biology and environmental studies at Saint Mary’s University in Halifax. “We can take all these wasted exterior surfaces and transform them, both to save energy and to make our urban environments more liveable.”

Lundholm is a proponent of “green roof technology,” which involves adding soil and vegetation to rooftops to achieve aesthetic and practical results.

In hot weather, green roofs reduce the amount of heat transferred through the roof, thereby lowering energy demands on a building’s cooling system. A 2003 study by N.H. Wong and colleagues at the National University of Singapore found that heat transfer through a green roof over a typical day was less than 10 percent of that of a conventional roof.

“Cities are getting hotter as we lose our urban forest and green spaces,” explains Peck. “As it gets hotter, people crank up their air conditioners, adding to the peak load demand on coal-fired power stations that emit huge amounts of greenhouse gases. The idea of cooling cities by investing in green infrastructure presents us with a tremendous future benefit.”

When it rains, green roofs improve urban storm-water management by retaining water and helping to reduce storm runoff overloads. Yet another advantage, according to a study by the U.S. Environmental Protection Agency in 2000, is that green roofs tend to last up to 20 years longer than conventional ones by protecting against UV light damage and reducing temperature fluctuations.

They also increase sound insulation, and as an added bonus, rare birds, insects, and plant species sometimes spontaneously colonize these gardens, bringing much-needed biodiversity back to the urban landscape.

It’s no wonder then that roof gardens are sprouting up on hotels, business centres, and condominiums, especially in Europe. According to Livingroofs.org, a UK green roof resource, since 2000, over 30 million square metres of green roofs have been erected in Germany alone. While more expensive to construct than conventional ones (roughly double the cost), green roofs can be more economical over a roof’s lifespan because of energy savings and increased longevity. 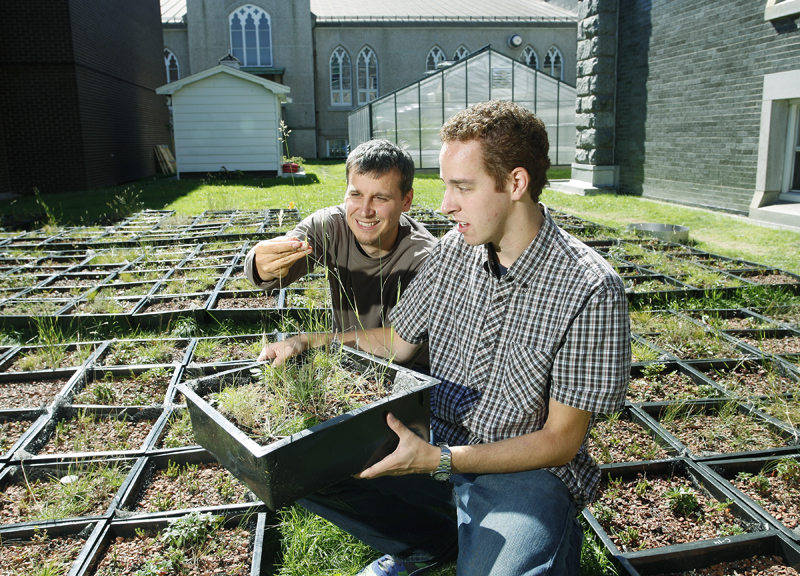 In Canada, green roofing is still in its infancy. Most of the plants used are of the Sedum species (succulent rock garden plants) because they grow so well in shallow soil. One focus of Lundholm’s research is to identify additional native plant species—including several that grow naturally in the rocky outcrops of Atlantic Canada—that might work as well or better than Sedums.

He’s also looking at combining several different species to improve overall green roof performance across seasons. “Different plants perform well in wet or dry conditions,” says Lundholm. “If you want to keep the roof green for the whole growing season, then you’ll need a plant that does well in the spring when it’s wet and another that can survive drought conditions in the summer.”

A pilot project involved growing up to 20 different native species in a greenhouse, then transporting them to the roof of the St. Mary’s library building. The research effort will expand significantly this spring as the same roof is transformed into a full-fledged test facility—the first of its kind in Atlantic Canada—with state-of-the-art equipment designed to measure every aspect of green roof performance.

The new test facility will allow researchers to pinpoint which factors have the most positive influence on green-roof performance. Lundholm will also collaborate with Halifax architects and Dalhousie University’s Faculty of Architecture to apply the data to future building projects in the region. And he is working with local nursery owners to grow native plant species for green roofs on a larger scale. “There are some regional business spin-off opportunities that are definitely worth exploring,” he says.

Ultimately, Lundholm hopes to create a roof tailored to the Atlantic Canadian climate using, wherever possible, native-grown plants, and plans to analyze the costs and benefits of green roof technology to help encourage its installation in the region. “People need to know how much money they can expect to save in cooling and heating costs,” he says. “Once we have that information, we’ll have a much better chance of attracting the attention of policymakers and industry.”

To tackle the issue on a broader level, Lundholm also works with colleagues across Canada, including Brad Bass with the University of Toronto’s Centre for Environment and Maureen Connelly at the Centre for the Advancement of Green Roof Technology at the British Columbia Institute of Technology. “Together, we’ll be able to look at reasons why we get regional differences in green roof costs and benefits,” says Lundholm. “This hasn’t been done before in North America, so I’m very excited about that.”

Current green roof technology demonstrates only the beginning of where things could grow. Several potential benefits require further exploration, such as whether green roofs reduce heating costs by providing added insulation or if air quality is improved from green roofs trapping airborne particulates, as well as new opportunities for urban food production. The possibilities for green roof technology are as lofty as the gardens themselves.

Over 200 papers on green roofs.