Living on the edge

Living on the edge 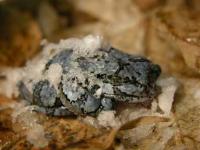 It’s not unusual for scientists to become excited when talking about their research. But Ken Storey is an explosion of exuberance, repeatedly interrupting his own discourse to head in new directions.

Such frenetic energy is paradoxical for a man whose research deals with organisms that can deliberately slow the pace of life to adapt to extreme environments by turning off key functions at the molecular level. The Carleton University biochemist has investigated toads that survive months without water, frogs that spend winter as frozen lumps, insects that carry antifreeze proteins, lemurs, squirrels and bats that hibernate, and so on, from yeasts to giant squids.

It all began when Storey’s PhD supervisor plunked down a live turtle on his desk, wondering aloud how it could live for months without oxygen. Storey says the wide range of subjects he’s tackled in the four decades since betrays his short attention span.

“Most scientists look at a field and say we have to dig deeper. I look and say there are diamonds all over. I’m going to light up a cigar and look at those diamonds.”

Looking at those diamonds has generated over 670 research publications and involved the supervision of 37 PhDs and 59 master’s students in his laboratory. Brock Fenton, co-editor of the Canadian Journal of Zoology and a former Carleton colleague, says Storey is “extremely focused and has real talent for attracting good students to work with him. He sets high standards and holds himself to them.”

Those standards led to a Canada Research Chair in Molecular Physiology, the 2010 Flavelle medal from the Royal Society of Canada, and the 2011 Fry Medal from the Canadian Society of Zoologists, which recognizes an outstanding contribution to knowledge and understanding in an area of zoology. Storey’s contribution involves pioneering work with complex biochemical mechanisms, such as the reversible phosphorylation regulation of enzymes, autophagy and the anti-Pasteur effect.

Yet beyond such intimidating technical terms lies the researcher’s true quest: the search for a biological version of what a Tolkien fan would call the one ring to bind them all.

“I know in my head a lot more than I can prove,” he says, “and that’s what drives you in science.”

Unravelling how different organisms adapt to extreme surroundings, says Storey, is gradually revealing an overarching biochemical unity. The outward signs may differ — some animals resist freezing cold, others desiccating heat — but he believes the fundamental pathways for these adaptations will turn out to be related, if not identical.

Storey’s long-term research into the winter freezing and spring thawing of the common wood frog is one example. Initially, he discovered that the frog pumped its body full of sugar, in the form of glucose, which acted like antifreeze, to protect the insides of cells while more than two-thirds of the frog’s body water turned to ice in extracellular places such as in the abdominal cavity. Next, the Storey lab identified multiple genes responsible for the phenomenon, and then his team figured out how the genes are regulated. Most recently, he and his co-workers have determined that the frog, like other animals, stops and starts such biological processes with waves of microRNA, Twitter-like snippets of the basic genetic building block, ribonucleic acid (RNA) that can inhibit the translation of gene products into proteins.

A number of medical researchers are interested in how Storey’s findings could apply to humans. The human kidney, for example, has a brief transplant window, since it stops producing chemical energy once it’s removed from a donor. Our cellular power plants, the mitochondria, shut down quickly.  Storey’s research has found that hibernating animals release a nuclear molecule called NRF-1, which turns on their mitochondria even as other biological functions slow dramatically. Identifying molecules that would activate human mitochondria even as overall metabolic functions slow would help the development of superior techniques for the preservation of human organs for transplant..

At 64 years of age, Storey is still launching himself into scientific adventures. He’s just back from studying squid in the Red Sea off the coast of Saudi Arabia for phase two of a project that previously took him to the Sea of Cortez in Mexico to investigate the giant Humboldt, or red devil, squid, a two-metre-long creature that appears to be thriving in the expanding zones of oxygen-deprived water along the Pacific coast.

Ken Storey says a CFI grant in 2001 was “the fountain of youth” for him. The grant, which accompanied his Canada Research Chair, allowed the biochemist to obtain state-of-the-art technology and replace laboratory diagnostic equipment that was past its prime. With the new tools, Storey was able to pursue pioneering research that garnered major operating grants from other funding agencies.