Dignity Therapy is a novel approach to palliative care that allows patients facing death to record their memories, thoughts and hopes
By Monique Roy-Sole 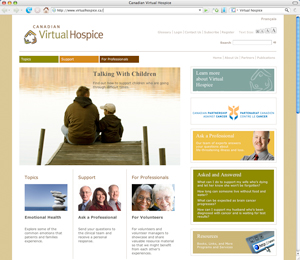 “Dignity Therapy made me feel worthwhile as a person. It made me realize that my life hasn’t been a total disaster. It gave me a totally different outlook on my illness and on my whole life.”

These words from a terminally ill patient are among scores of poignant testimonials that Dr. Harvey Chochinov has received from participants in Dignity Therapy, an intervention he developed for people dealing with the imminent end of their lives.

A world-renowned expert in palliative care, Chochinov is a Distinguished Professor of Psychiatry at the University of Manitoba and the founder of the Manitoba Palliative Care Research Unit at CancerCare Manitoba. He came up with Dignity Therapy to address psychosocial and existential distress among the terminally ill. Much of his work involves cancer patients. “Many health-care professionals talk about dignity in a way that is either highly poetic or philosophical or politicized,” he says, “but not necessarily what it means in terms of clinical care.”

In Dignity Therapy, patients are invited to talk about their lives or what matters most to them during a 30-to-60-minute session with a therapist. The conversation is recorded, transcribed and edited, then returned within a few days to the patient, who is given the opportunity to read the transcript and make changes before a final version is produced. Many choose to share the document with family and friends.

Dignity Therapy differs from other types of palliative care in that it is empirically based and follows a set format, including a defined list of questions for the patients. A recent study gauged  family members’ impressions of Dignity Therapy six to nine months after the death of their loved ones. Ninety-five percent said they would recommend it to other patients and their families.

“Just under 70 percent said they saw this as being as important an aspect of care for their now deceased loved ones as anything else that was done on their behalf,” says Chochinov, who holds the Canada Research Chair in Palliative Care. “This is pretty profound when you consider that this is a one- or two-session psychological intervention that requires no medications of any kind.”

Chochinov will soon release the results of a four-year randomized controlled trial of Dignity Therapy, which was conducted in Winnipeg, New York City and Perth, Australia. This is the first study to compare Dignity Therapy with other approaches to palliative care.

Katherine Cullihall, a research nurse who works with Chochinov at the Manitoba Palliative Care Research Unit, has been on the front lines of Dignity Therapy research, having conducted more than 100 interviews with terminally ill patients. The therapy, she says, “allows people to talk about things that are important to them, not just related to their illness.”. Although the therapy is not for everyone, she points out, it has lasting benefits for many families.

Cullihall remembers a man who had long battled with alcoholism, life on the road and separation from his wife and children. Some time after he died, his daughter told Cullihall that her father had never told her he was proud of her, but she read so in his transcript. “She kept that document with her wherever she moved,” says Cullihall. “They really had had no relationship. Those few words made a difference. I think they changed her life and how she thought of him.”

Concerned with the lack of palliative-care expertise across the country, Chochinov and a team of specialists launched the Canadian Virtual Hospice in 2004. Now, more than 1,000 Canadians visit the Canadian Virtual Hospice every day. The on-line resource provides support and personalized information for patients, families, health-care providers, educators and researchers dealing with issues related to death.

One of the website’s unique features is “Ask a Professional,” where Canadians can send a question to a palliative-care specialist and receive a detailed personal response within days. Chochinov, who has been chair of the Virtual Hospice since its inception, says, “This is about being able to facilitate connections between people who are feeling vulnerable at some point in time.”