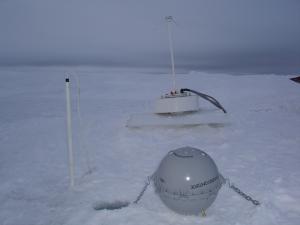 Locked in the ice, one of the four monitoring buoys will collect data on everything from nutrient levels to water temperatures
Bruno Tremblay

The disappearance of HMS Terror and Erebus, two ships that set sail from England in 1845 seeking an Arctic route from east to west, haunts us still. This voyage has become known as the worst tragedy to have struck the early explorers seeking a faster world trade route through the Northwest Passage.

The hostile Arctic environment that swallowed Sir John Franklin’s ships poses no less of a challenge to today’s explorers. True, we can smash through ice floes with ships far sturdier and more powerful than his sailing vessels. And the legendary 19th-century explorer would likely have envied our ability to navigate and map the vast extent of the region with data from orbiting satellites. Perhaps such modern tools might even have kept Franklin and his more than 130 men from perishing.

Yet, more than 160 years later, we are really only beginning to understand the weather and ice-floe changes that occur in the Arctic from season to season, information that might offer hints of where to search for the remains of those lost ships.

And this is where Bruno Tremblay comes in. An ocean scientist at McGill University, in Montréal, Tremblay is charting the climatic course across the Arctic. He has installed sophisticated monitoring buoys in key locations, collecting data on everything from currents, water temperature and nutrient levels to underwater sounds that reveal stresses within the ice.

“I’m interested in Arctic climate, present-day and future,” says Tremblay. “I’m mainly looking at what causes variability, such as the extent, thickness or motion of sea ice.” That variability is then captured in an elaborate computer model, which offers a tidy description of what the ice is doing.

Employing the same climate-modelling methodology that enables him to look ahead, Tremblay is also peering into the past. More specifically, he would like to determine the prevailing conditions in the area at the time of Franklin’s final voyage in 1845. Such data could help unravel the mystery of where Franklin’s ships sank.

According to messages left behind by the crew, the ships were last seen frozen in the ice off the northwest coast of King William Island. One theory of what happened next, based on examples of other icebound ships found thousands of kilometres from their last sightings, is that Erebus and Terror drifted southwest of the island with the ice floes and icebergs.

With the installation of four ice-based buoys in 2007, Tremblay began gathering data to feed his computer model. He plans to deploy three more buoys next year, a task that comes with its own challenges.

The original buoys, for example, just barely made it through foul October weather on a last-minute flight to Resolute Bay, almost missing their connection with the icebreaker CCGS Amundsen. As the ship reached the deployment sites, a helicopter ferried Tremblay’s team and their equipment onto suitable patches of ice.

Using an auger, the team drilled through the ice to insert long cables filled with temperature sensors, which take readings at the surface, in the ice and in the water below. They also carved niches in the ice to hold a sonar mast and the electronic core of the buoy, covering each with a wooden shield so that the devices would not heat up the surroundings. Powered for up to three years by a hardy lithium battery, the system can use satellites to report its location within a few metres as the ice is moved by wind and water.

Depending on luck and the team’s experience, says Tremblay, it takes one to two hours to complete this installation. Then, with the flick of a switch, the unit is activated, and its operators leave, never to see it again.

“We don’t get them back,” he says, noting that while it might be possible in principle to retrieve the buoys, the practical realities of being transported to their exact location is unlikely. 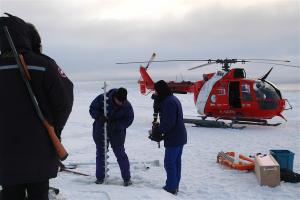 From these lonely outposts, then, the buoys send Tremblay a wealth of information, much of it unprecedented. His buoys represent some of the first attempts to track the movement of ice within the archipelago, including King William Island.

“We cannot go back all the way to 1845 with those reconstructions,” he says, “but we can go close enough that we know what the mean climate was.”

Tremblay refers to a considerable archive of sea-level air-pressure readings for different parts of the world, some dating back to the 1870s. These data serve as the foundation for estimates of how winds would have moved around the northern hemisphere—if not on a day-by-day basis, at least at the level of seasonal variations.

By revealing details of local wind and ice movement, the model can begin estimating the conditions when Franklin was in the region. The results take the form of likely drift patterns for the ice, along with the ships trapped in that ice. In this way, the model can tell today’s explorers where to look, giving probabilities about possible locations for the ships.

Such insight could help the work of Robert Grenier, chief underwater archaeologist at Parks Canada, who will be spending the next few years looking for these shipwrecks.

“As archaeologists, this sort of additional information is very interesting and valid,” says Grenier, noting that it will be combined with other evidence, including testimony from Inuit elders on traditional accounts of native people who sighted and possibly visited the abandoned ships before they disappeared.

None of these details offer up a precise point to search, notes Grenier, “but they are all clues we add together, like a detective.”

In addition, the archaeologist’s interests complement those of the climatologist, since any discovery would help validate the predictive power of Tremblay’s model, providing a definitive location for an object that was known to still be in the area in 1848.

“It’s a give-and-take thing,” says Grenier, “beneficial to both sides.”

Last summer marked the most recent attempt to pin down the final resting place of Erebus and Terror. A three-year project led by Grenier, marine archaeologists Ryan Harris and Jonathan Moore with the assistance of Inuit oral tradition specialist Louie Kamookak will combine ship-based sonar mapping with land-based searches for relics that might have been taken ashore by the crew or local native inhabitants, who may have found the vessels before they sank.

For Tremblay, this exercise amounts to more than solving a historic mystery and mapping climate patterns. He also thinks this work can help overcome a long-standing lack of Canadian support for research in the Arctic, which he says has lagged behind other nations, including many with no northern territory of their own.

And as Tremblay refines his computer model with field measurements taken from the buoys, he says that collecting this information is a way of physically demonstrating sovereignty over this part of the country. Few things could mark our presence in the Arctic more than using these findings and the related climate model to locate Erebus and Terror. 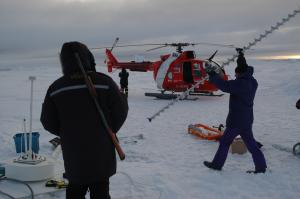 “What better way would you have to assert ownership of this land,” asks Tremblay, “than if you found those ships which are being looked for by so many people?”

British Royal Navy officer Sir John Franklin (1786-1847) led two successful Arctic expeditions that mapped more than half of what is now the northern Canadian coast. The third expedition, launched in 1845, was intended to complete this process and define the fabled Northwest Passage to the Orient. His two ships, Erebus and Terror, were well equipped for harsh Arctic conditions and were outfitted with three years’ worth of provisions, along with recent inventions such as steam engines and facilities for making fresh water.

Yet the expedition ended in disaster. More than two dozen subsequent expeditions throughout the rest of the 19th century looked for traces of the ships, eventually finding the gravesites of some of Franklin’s crewmen on King William Island, along with part of a logbook describing Franklin’s death of natural causes in 1847 and the subsequent abandonment of the icebound ships on April 22, 1848. But the vessels have never been found.

These 19th-century ships occupy an unrivalled place in the Canadian consciousness as emblems of the dire hazards posed by the Northwest Passage. Their status was reinforced a decade ago when the British government ceded ownership rights of these artifacts to Canada should they ever be found.

A Canadian Network of Centres of Excellence that brings together scientists and managers in the natural, human health and social sciences with their partners in Inuit organizations, northern communities, federal and provincial agencies and the private sector to study the impacts of climate change in the coastal Canadian Arctic.

An overview of a key course taught by Bruno Tremblay at McGill University.