Dr. Marla Shapiro is used to weighing in on major health and wellness issues. In addition to her family practice in Toronto, Shapiro is the national medical consultant for CTV News and Canada AM, and the host of CTV's Balance: Television for Living Well. She also writes a health column for The Globe and Mail.

But nothing prepared her for the discovery in 2004 that she had breast cancer. She became one of the more than 20,000 Canadian women diagnosed with breast cancer each year. She put up a fight and underwent reconstructive breast surgery—an option few women are aware of. Nearly five years later, Shapiro is focused on fundraising to create a national chair for reconstructive breast surgery. InnovationCanada.ca sat down with Shapiro to find out what it was like on the other side of the examination table.

InnovationCanada.ca (IC):What is it like being so public about such a personal struggle?

Marla Shapiro (MS): I have chosen to live my life in the public eye. The story we were experiencing is not a unique story, but nobody else was willing to talk about what it was like to have it. The point is, I am just like you, and maybe that's why we need to talk about this.

IC: What helped you get through having breast cancer?

MS: People say, "You're so brave." But I don't think you have a choice. You do the best you can do. The reality is, every day we get up and we live with uncertainty. What we can choose is our attitude. The challenge is to live our lives in a very mindful way; to live your life in the way you want to live.

IC: Where does Canada stand when it comes to the war against breast cancer?

Canadians need to be proud that we have huge, uniform access to care. Yes, we all complain about how long it takes, but we have it. We are one of the only countries that has answered the World Health Organization's call for a national cancer strategy.

IC: Is it enough?

MS: As Canadians, should we be proud? Of course we should. Overall, we really do have a good health care system. Do I want it to be better? Yeah. 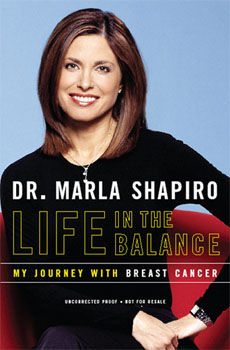 IC: How can we make it better?

MS: After I had my reconstructive surgery, and as I travelled around the country talking about it, it astounded me how many women didn't know about surgery as an option. The bias against it was akin to a facelift. When I spoke to my surgeon Joan Lipa, she said, "What we really need is an academic chair. There is nowhere in the world with an academic chair in reconstructive surgery." That means an endowed chair, dedicated with funds to do procedures, to train, to become a centre of excellence.

IC: Why aren't more women aware of this option?

MS: There is poor access to care and often a lack of information about reconstruction. I do believe that there is the sense that it's purely cosmetic and therefore not viewed as essential treatment. The option for reconstruction should be presented and left to the patient to decide. It is, I believe, part of the treatment process.

IC: So what needs to happen?

MS: I am not a fundraiser, but I am tenacious, committed and a very hard worker. So I went knocking on doors. It occurred to me that Belinda Stronach was stepping down at the time, so I sent her a note about what I wanted to do. About a month later, it became public that she had breast cancer. I sent her a letter saying, "I hope you know that I didn't know. … I didn't call because I was taking advantage of the fact you have cancer." But she understood what this was all about. She knew this was another step toward healing with dignity, and she committed to the first million for the chair.

IC: Why are you so committed to fundraising for the chair?

MS: I am committed because it should be an option for all women. It is shocking that no chair exists which speaks to the need. There is a great need for a centre of excellence that can train, retain and education both physicians and patients.

After treatment and reconstructive breast surgery, Shapiro wrote her memoirs, Life in the Balance: My Journey with Breast Cancer, and produced a documentary, Run Your Own Race, about her experience.

Since 1997, the CFI has invested $2 billion in health research infrastructure, more than $250 million of which has gone into infrastructure that supports cancer research.