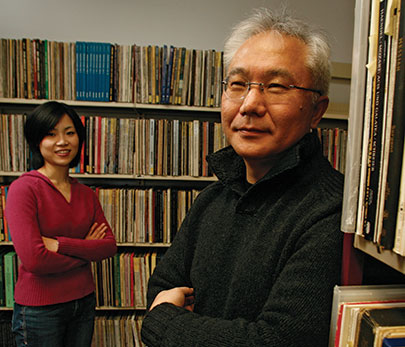 Excerpted with permission from McGill University.

In the era of the digital download, when ghostly MP3s float freely from computer to cell phone, and the collected works of ABBA and Zappa can slip comfortably into a shirt pocket, it's easy to forget that music recordings were once inextricably tied to physical objects. From 78 RPM shellac discs to long-playing vinyl albums (LPs), the 20th century produced at least a million discrete analog phonograph records. The Schulich School of Music's Distributed Digital Music Archives and Libraries (DDMAL) research program is developing the technology to digitally preserve the sounds found in those dusty grooves.

The basics of phonograph technology changed little from 1878, when Thomas Edison built his first record player, to the rise of the compact disc in the early 1990s: a needle, or stylus, moves through a circular groove carved into the surface of a spinning plastic disc, giving off vibrations that are converted into an audible electric signal. The traditional method for digitizing analog recordings involves a standard turntable, an analog-to-digital converter, and a CD burner. Results vary according to the equipment: armchair audiophiles can get in on the action for a few hundred dollars, but projects requiring archival-quality recordings—such as the Schulich School of Music's ongoing quest to digitize its vast collection of Handel recordings (originally amassed by the late McGill alumnus David Edelberg, it's the world's most extensive Handel LP collection)—necessitate a decidedly larger investment. And that's not the only catch.

"Every time you place a phonograph needle on a record," explains Ichiro Fujinaga, a DDMAL researcher and professor in the Schulich School of Music, "the record gets damaged." Damage from a single play may be negligible for pristine vinyl, but potentially catastrophic for a fragile disc that's the only known copy of a specific recording.

That's why Fujinaga and his DDMAL co-researchers are exploring a radical alternative to the stylus: optically scanning an LP to create a precisely detailed 2D or 3D image of its surface. Using a white-light interferometry profiler—a $300,000 microscope usually reserved for industrial applications like quality control inspection of computer hard drives—they scan the unique widths and depths of an LP's grooves. Fujinaga then uses software that simulates how a needle would traverse these virtual grooves, converting that movement into a digital waveform—which is transformed into audible sound, essentially "playing" the image. In addition to eliminating surface noise due to dirt or scratches, this non-invasive digitization method can be used to safely recover sound from worn, or even broken, records that would otherwise be unplayable. 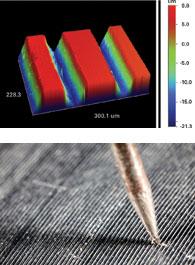 Researchers use a $300,000 microscope to scan an LP's grooves (above). The scan is then converted into a playable 3D computer image (top).

In November 2006, Fujinaga and his researchers became the first people in the world to hear a 3D image converted into stereo sound. (Other researchers have done this with mono records, a far less complicated undertaking than two-channel stereo.) "It was just a sine tone," says Fujinaga. "The recording itself wasn't exciting, but the achievement certainly was."

The challenge now lies in improving the scanning time required per album. At the lowest resolution, it currently takes 10 days to scan one side of an LP (some 20 minutes of music); to scan the same side at the highest resolution would require five years.

"It makes me appreciate the power of analog," says Fujinaga, who moonlights as a musician in Arashi Daiko, a Montreal ensemble which performs the ancient Japanese drumming known as taiko. "That simple needle gets so much information-and it's so much work to do the same thing digitally.

"I like to joke that our microscope is the most expensive turntable in the world—and the slowest."

Working with a network of sound recording engineers, pattern recognition experts and psychologists, Fujinaga and his co-researchers are trying to determine the minimal scanning resolution to achieve optimal audio quality. It all depends on how much we can really hear. 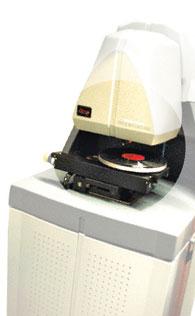 "If humans can't tell the difference between scanning at 50 times magnification and 10 times magnification, then why spend the extra time?" he asks. "We know nothing about what makes a good sound. People spend hundreds of thousands of dollars on their stereo systems thinking that they're better-but what does it mean to be better? We need to find the people who have golden ears, and determine what they can actually hear, and what they're only pretending to hear."

The project isn't just about the music, either. The DDMAL is also working on the problem of digitizing, and creating meaningful metadata for album covers and the labels affixed to the centre of the records. It's a daunting undertaking that will eventually offer musicologists the incredible boon of being able to rapidly search librettos, photos, publishing information and liner notes.

"If we have over a million records to do, we'll have to start soon," Fujinaga says. "So now is the time to do the research on how we should do this properly.

"We want to do it right the first time, so 50 years from now people won't have to do it all again."

The Distributed Digital Music Archives and Libraries program receives funding from the Social Sciences and Humanities Research Council, the Canada Foundation for Innovation and the Daniel Langlois Foundation.