The unmistakable outline of the coasts of lakes Erie, Ontario, Huron, Michigan and Superior dominates the geography around southern Ontario and the surrounding American states. The waters in these basins — left there 10,000 years ago as the glaciers of the last ice age retreated — constitute 21 percent of the world’s surface fresh water. As a natural resource, a transportation corridor and an ecological powerhouse, the Great Lakes are a complex natural gem from which research questions abound. Daniel Heath is a professor in the department of biology at the University of Windsor and the executive director of the Great Lakes Institute for Environmental Research (GLIER). Located on the Detroit River, GLIER focuses on the Great Lakes, but its members work on water issues around the globe. 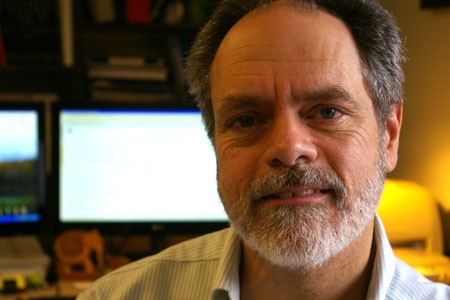 Daniel Heath is executive director of the
Great Lakes Institute for Environmental
Research at the University of Windsor.
Credit: Stephen Fields, University of
Windsor

Why are the Great Lakes important?

They represent the largest single watershed of fresh water in the world, so they are an enormous resource. Because they are a transportation channel, they are a hub of industry and human habitation as well. I think it’s something like 40 percent of the Canadian population lives within the Great Lakes watershed.

What fascinates you about them?

It’s just such a dynamic and large ecosystem. I’ve worked in previous aquatic ecosystems, but they were usually much smaller lakes. You don’t get these kinds of dynamics in any other aquatic habitat except the ocean. There’s a diversity of life, both aquatic and terrestrial — birds, mammals, reptiles. The fish diversity is enormous and feeds into several food webs. There is also the complexity of humans catching fish and the practical issues of contaminants that affect the fish directly and the humans who eat those fish.

Where does GLIER fit in?

GLIER was created over 30 years ago because we needed to have a focused effort across disciplines to figure out the large Great Lakes ecosystem. We have folks from engineering, computer science, biology and earth science. We all rub shoulders with one another at meetings, lectures and conferences.

Give me an example of a project that draws everyone together.

We have a project in development right now called GLUON, the Great Lakes Underwater Observation Network. We are putting stations across the Great Lakes to monitor processes in the water in real time. So we will be able to see everything from water chemistry to plankton dynamics and fish populations and how all of these systems interact with one another.

Do the Great Lakes present a unique research opportunity because of their size?

The complexity of the Great Lakes is both challenging and fascinating. There is an urgency to the work we’re doing that you don’t get with a smaller lake. A lot of people depend on them for more than recreation. It’s their jobs and livelihood. And, finally, the Great Lakes may serve as a critical resource for the looming challenge of freshwater shortages.

What are the most worrisome freshwater issues facing the Great Lakes?

Climate change and invasive species are changing the aquatic ecosystem in ways that are difficult to predict. We have a pretty good handle on contaminants like PCBs, although we're finding novel or unexpected contaminants that are having unanticipated effects.

But climate change is taking us into uncharted territory. With Great Lakes invasive species, we keep getting surprises, both good and bad. The Asian carp captures people’s imagination because it’s such a big, dramatic animal, but some of the invertebrate invaders are very worrying as well. To my mind, those things that affect the ecosystem at a large level, almost at a complete ecosystem level, are the ones that really worry me, and I think we need to focus on them. The Great Lakes are the economic heart of North America and the source of drinking water for millions of people. We can’t take them for granted.

Which invasive species are affecting the lakes at that level?

In other ecosystems, Asian carp have become so common that they have made huge impacts by consuming a disproportionate amount of zooplankton and depriving other species of food. We could see this happen in the Great Lakes. Round goby are also incredibly prolific — our divers have seen them in Lake Erie swarming on the lake bottom like a moving carpet, and they are omnivores. They are, by far, the most common biomass in Lake Erie right now. There are a couple of other invasives that the ecological models predict, and we’re watching closely, using DNA extracted from the water, to see whether they show up. Even if there are a few of them, we'll pick up their DNA from sloughed-off skin cells, body waste or cells released as dead-fish decay and know they’re there really early on. There is something forensic about this approach. For example, we can tell whether Asian carp are getting through the barriers and into the Chicago canal. This system is still in its early stages, but in principle, DNA evidence can tell us a lot about what’s happening in the Great Lakes.

Is there a silver lining?

First, these are really big ecosystems, and they are remarkably resilient. Some researchers at GLIER and elsewhere feel we may be on the verge of some enormously negative things happening. I think we're not quite there. You're talking about an ecosystem so big that it tends to bounce back. Zebra mussels are problematic, but they haven’t produced the dire consequences that were originally predicted.

Second, I think research by GLIER and other researchers around North America is going interdisciplinary — scientists are looking at things in terms of multiple environmental stressors and are integrating questions about contaminants, climate change, invasive species, fisheries and other areas. I think this holistic approach might give us simple answers that will provide governments and water-related agencies with relatively clear directions for regulation and remediation.