Researchers at Dalhousie University probe the Arctic skies with lasers for answers to climate change
By Matthew Bonsall
A green laser beam from the Polar Environment Atmosphere Research Laboratory (PEARL) in Eureka, Nunavut, could soon shed new light on climate change and its role in global warming. Beginning this summer, a laser radar, known as a lidar, will emit a four-centimetre-wide pulse of light into the lonely Arctic night several kilometres above PEARL.

Lidar is similar to radar—each receives signals that bounce off objects in its path. While radar involves high-frequency radio waves, lidar uses a powerful laser to emit a short and intense pulse of light. As the pulse travels upward, it gets scattered by fine atmospheric particles (or aerosols). The time it takes for the light to return to the lidar enables researchers to measure the distance and wavelength of the aerosols.

Lidar’s ability to measure aerosols may play a key role in understanding what is behind the worrisome warming trend in the Arctic. “We are seeing profound changes. Over the last 30 years, the average temperature in the Arctic has increased by 4°C. To put that in perspective, the difference in average temperature between now and the last ice age was only 6°C,” says Tom Duck, a Dalhousie University professor and designer of PEARL’s new lidar system.

Duck’s lidar will help increase the accuracy of climate change predictions, and help scientists study the processes associated with radiative exchange above Eureka. Radiative exchange describes how the sun’s rays interact with the surface of the Earth and cloud cover. During the summer, when the Arctic is continually sunlit, the snow and ice cover reflects a significant proportion of the sun’s rays back into space. But aerosols and other pollutants are forming clouds that are trapping solar radiation in the atmosphere and possibly contributing to global warming. With lidar, scientists can now determine the quantity of aerosols present and track their sources.

PEARL is in an ideal setting for the lidar system to collect such data. It is one of the northernmost permanent research installations on Earth—only 1,100 kilometres from the North Pole. “The skies are very clear, and it’s also a place where the polar vortex rotates right on top of you,” says James Drummond, a Canada Research Chair and professor at the University of Toronto and Dalhousie University. The polar vortex is a swirling mass of air found in the stratosphere above the Arctic and Antarctic. Variations in the vortex may explain the warming trend scientists are observing—one that is moving at a much faster pace in the Arctic.

Canadians living in the North experience the effects of the increased temperatures firsthand. “Our elders are talking about how the sea ice is slower to freeze. Without the thick ice, the polar bears can’t hunt seals, and they stay close to shore. On most nights, you can see 8 to 12 bears. Twenty years ago you would hardly have seen any,” says Brian Manning, school principal in Resolute Bay, a community of 250 people about 630 kilometres south of Eureka.

Resolute Bay acts as the jumping-off point for researchers travelling to PEARL. What they learn amid the isolation of the Arctic wilderness could help northern communities cope, plus help address the global consequences of climate change.

Despite living in a vast northern country, most Canadians spend little time thinking about the Arctic. But that could change if researchers at PEARL prove that climate change may evolve into one of the most challenging problems humans have ever faced.

“We’re up there keeping an eye on the planet, and we have our foot on the accelerator when it comes to understanding what’s happening with climate change,” says James Drummond, who leads a PEARL team of university and government scientists.

The Arctic is where the most dramatic fallout from climate change happens. At the same time, the Arctic may actually be playing a role in speeding up the pace of climate change in what researchers call a large-scale feedback loop. The three fastest-warming regions on the planet in the last two decades have been Alaska, Siberia, and parts of the Antarctic Peninsula. As snow and ice melt, less heat is reflected skyward and more remains trapped on earth. This in turn increases temperatures and creates more melting, leading to potentially dangerous rises in sea levels and other consequences. 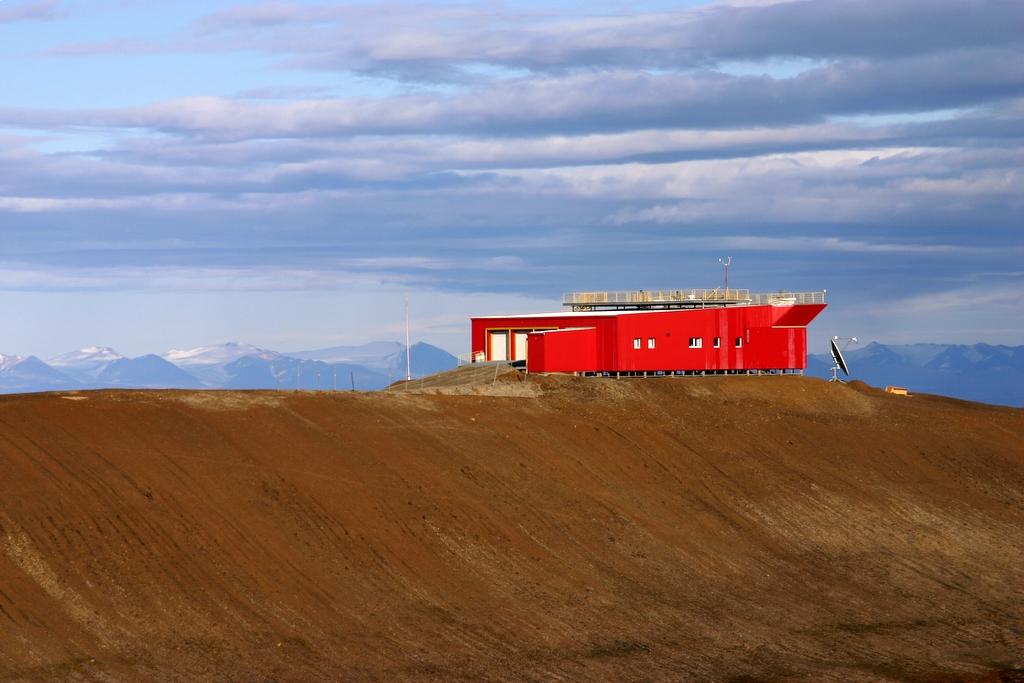 However, despite the pivotal role the Arctic may play in climate change, huge gaps remain in our scientific knowledge about how Arctic climate works. According to the United Nations’ World Meteorological Organization (WMO), climate models do not work well in the polar regions. For example, they failed to predict the dramatic break-up of Antarctic ice shelves observed in recent years.

To fill these gaps, the WMO is promoting International Polar Year. It will bring together researchers like those at PEARL with colleagues in polar countries such as the United States, Russia, and Norway. PEARL is also set up to allow researchers to operate instruments remotely from other labs.

PEARL’s location offers many opportunities for measurements inside and outside the polar vortex with a large number of polar satellites orbiting overhead. This makes PEARL an ideal atmospheric observing site. As well, visiting researchers can access PEARL’s permanent instruments like the lidars, and place equipment temporarily or permanently at the laboratory to take full advantage of the facility.

PEARL demonstrates how Canada’s northern climate, cutting-edge research projects, and international links will keep it at the forefront of critical climate change research in the years ahead.

PEARL was conceived as a partnership between Canadian universities and government research laboratories. It also attracts researchers from around the globe who need access to lab facilities at the top of the world. PEARL was established by the Canadian Network for the Detection of Atmospheric Change (CANDAC)—a network of researchers and resources dedicated to addressing issues of atmospheric change over Canada.

The private sector also plays a role. For example, the new lidar at PEARL is being designed in collaboration with Spectral Applied Research, a Toronto-based optical systems company.

Take a photographic tour of Eureka.

Experience Eureka and its surrounding areas through the eyes of photographer Pierre Fogal.

Watch NASA videos of melting sea ice and how it leads to a warming feedback loop.