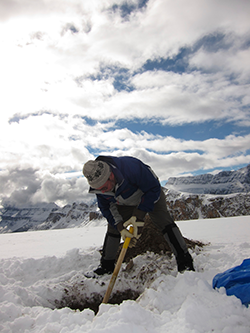 John Pomeroy digs a hole for the base
of a solid precipitation gauge as part
of an automated snowpack and weather
station in the high Canadian Rockies
above Helen Lake, Banff National Park
in October 2013.
Credit: Tim Link, University of Idaho

The disastrous flooding of Calgary and southern Alberta in June 2013 took many people by surprise. While weather forecasters had predicted a heavy rainfall, few expected the widespread devastation it caused.

One reason the deluge caught people off guard is that there are scant detailed measurements of rainfall, snowfall, evaporation, snowpack depth, snowmelt, glacier melt, blowing snow and stream flow at high elevations in the Canadian Rockies. Scientists use such data in sophisticated hydrological models to predict the water-storage capacity of the soil, the stream flow and the potential for floods. But if the data are insufficient or inaccurate, the models are less reliable.

Hydrologist John Pomeroy, the Canada Research Chair in Water Resources and Climate Change at the University of Saskatchewan, is changing that. He’s building the Canadian Rockies Hydrological Observatory (CRHO), a network of 30 weather stations and stream-flow gauges to capture vital hydrometeorological data in the Rocky Mountains north of Banff and in the Front Ranges of the Kananaskis Valley. The CRHO is located in the headwaters of the Bow River Basin, a major water source for communities and irrigation that covers a vast area of southern Alberta and Saskatchewan. It’s notoriously flood-prone, and climate change is expected to only make it more so. 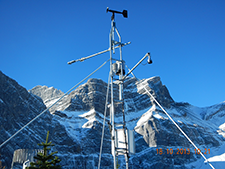 CRHO measurements will be shared in real time on a dedicated website so that governments and other agencies can use the information to improve flood warnings and to manage the region’s water supply responsibly.

“The CRHO will include a few focal points where we will gather a high density of station observations that, together, will enable better hydrological predictions,” says Pomeroy. “This will tell us whether our current prediction models are working and allow us to develop improved models. It also might encourage governments to enhance weather, snow, glacier and water observing networks over larger areas of the Rockies.”