Montreal researchers demonstrate that the need to get enough sleep grows as we age, yet can be more difficult to achieve
By Brian Bergman
With each New Year that passes we get a little older and, it would seem, a little more tired. The blunt fact is, as we age, our sleep patterns change—usually for the worse. We wake up more often, have more difficulty going back to sleep, and experience less of the deep, dreamless portion of the natural sleep cycle that refreshes the mind and body alike. As we resolve at this time of year to make positive changes in the way we live, is it any wonder that getting a good night’s sleep tops many people’s wish lists?

Julie Carrier, an expert on sleep and aging, is a member of one of Canada’s largest sleep research facilities at the Centre de recherche de l'Hôpital du Sacré-Coeur de Montréal. While it’s long been known that the elderly experience more sleep problems than the young, Carrier’s research has helped establish that changes in sleep patterns begin much earlier in life than previously believed. Moreover, Carrier has discovered that it’s the middle-aged who are at the highest risk of suffering from disruptions in the sleep-wake cycle.

A normal sleep pattern consists of three phases, repeated over roughly 90-minute cycles. The phases are light sleep, slow-wave sleep (otherwise known as deep sleep), and rapid eye movement (REM) sleep—characterized by the eyes moving back and forth beneath the eyelids. While REM sleep is when most dreaming occurs, it’s believed the slow-wave portion is the most rejuvenating part of the sleep cycle. Unfortunately, it’s this phase that steadily deteriorates with age.

As a rule, older people go to bed and wake up earlier than young people, and their sleep is shorter, shallower (less deep sleep), and more fragmented (waking up more often). Once awake, older people have more trouble going back to sleep. They also take longer to recover from sleep deprivation and from disruptions to normal sleep patterns such as shift work and jet lag.

As Carrier completed her post-doctoral sleep research in 1998, she began to ask herself how early in life these changes take place. “For a long time, the middle-aged population was totally forgotten in terms of sleep research,” she says.

She took on a study of 110 men and women between the ages of 20 and 59. Carrier was surprised to learn that the kind of sleep deterioration previously associated only with the elderly actually begins to show up as early as age 30. The most dramatic factor was the loss of slow-wave sleep. Middle-aged subjects had, on average, half the amount of slow-wave sleep as younger subjects.

Carrier’s findings shed new light on the mounting sleep deficit experienced by many people in mid-life. The elderly, she notes, are often able to make up for sleep loss through daytime naps or other alterations in their sleep schedules. The middle-aged, with their multiple social, family, and professional responsibilities, are hard-pressed to do the same.

“One of the first things middle-aged people will cut back on is sleep time,” says Carrier. “This is a very, very bad decision. People should not deprive themselves of sleep.” 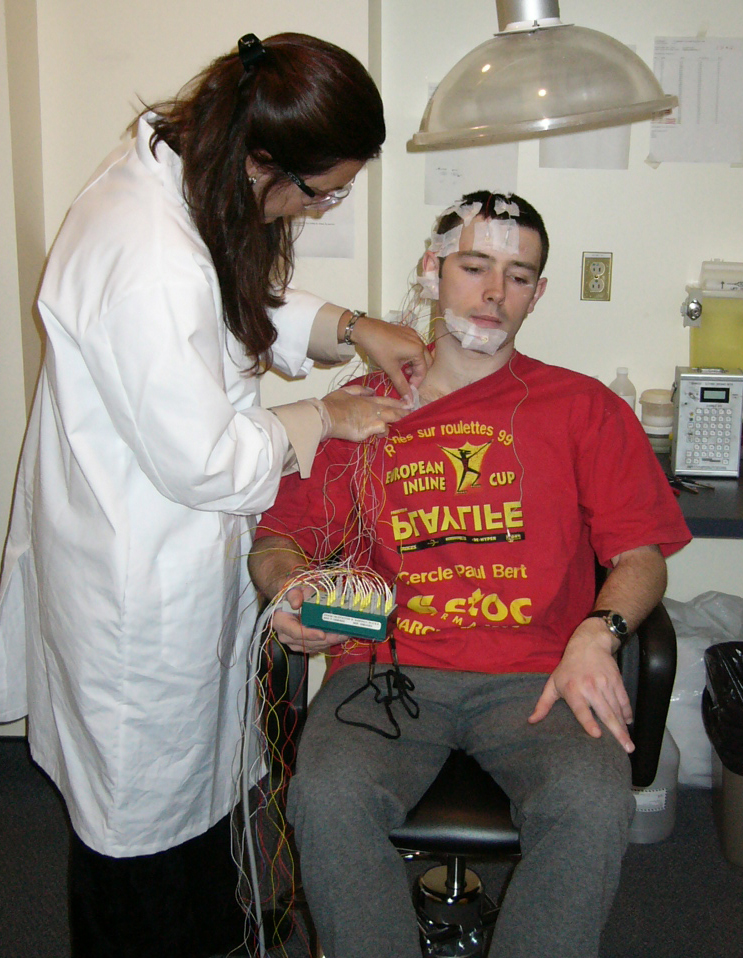 It’s long been known that sleep deprivation has a negative impact on mood and alertness. In fact, Carrier notes that the loss of just one night’s sleep can have the same effect on a driver’s reaction times as being over the legal blood alcohol limit. Again, the consequences of sleep deprivation may be hardest on the multi-tasking middle-aged, as it reduces their productivity and puts them at greater risk of accidents.

There is growing evidence that lack of sleep also contributes to a host of health problems, including cardiovascular failure and weakening of immune systems. Moreover, common sleep disorders such as insomnia, sleep apnea, and restless leg syndrome all increase with age.

Carrier’s findings point to the need for more research on the underlying causes and effects of age-related changes in sleep patterns. This, in turn, should lead to better treatment and prevention measures.

In the lab, Carrier uses electroencephalography (EEG) equipment to monitor circadian (24-hour) rhythms such as body temperature. Portable EEG machines allow her to do the same with subjects in their own homes. More recently, she has used functional magnetic resonance imaging to record brain activities of people while they sleep.

“Right now, I can describe the impact of getting older, but I can’t tell you  we lose slow-wave sleep as we age,” says Carrier. “I also can’t say for sure what’s more important—the quality or quantity of sleep we get. Although sleep research has been around for 50 years, there’s still so much we don’t know.”

According to Julie Carrier, a sleep expert, at least 20 percent of the population—or roughly six million Canadians—regularly experience some kind of sleep disturbance. As we age, the proportion increases. A 2003 survey by the U.S. agency, the National Sleep Foundation, found 67 percent of respondents between the ages of 55 and 84 reporting at least one or more symptoms of a sleep problem at least a few nights a week. It’s estimated that more than 25 percent of the population will be over 55 by 2020. Given this demographic trend, the pursuit of a good night’s sleep is expected to become a more common issue for growing numbers of people.

Against the backdrop of such statistics, millions of existing and potentially sleep-deprived Canadians stand to benefit from Carrier’s research. “Julie is doing excellent basic research on sleep regulation,” says Helen Driver, a prominent Canadian sleep researcher and president-elect of the Canadian Sleep Society. “The beauty of her work is that she is studying people in a well-controlled environment and always accounts for circadian rhythms.”

One of Carrier’s recent research projects, for example, looked at how caffeine—the world’s most popular stimulant—influences sleep. It is already known that caffeine increases the time to fall asleep as well as the number of awakenings, and decreases the amount of deep sleep. By controlling caffeine intake and sleep schedules of 34 individuals in the lab, Carrier’s team showed that caffeine’s effects are even stronger when consumed at night, making it all the more difficult to recuperate the next day. This suggests that night-shift workers who use coffee to stay alert risk an even poorer quality of sleep. 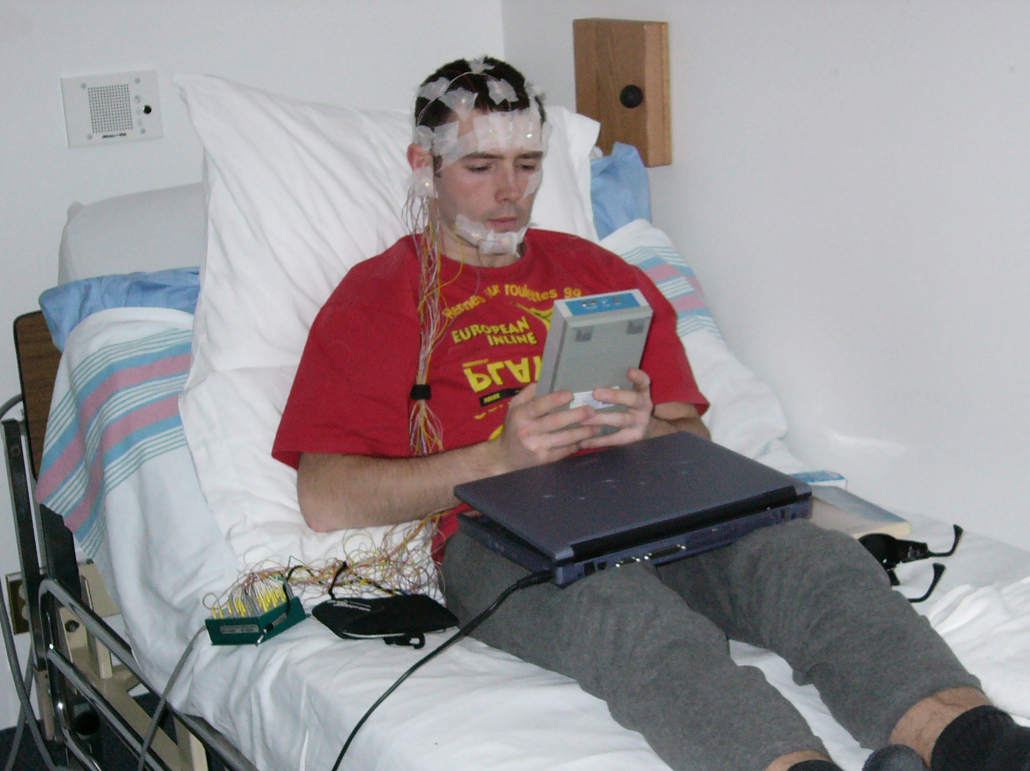 Carrier’s sleep research demonstrates that maintaining good “sleep hygiene” becomes more essential as we get older. Among her key recommendations for sleeping soundly: adopt a regular sleep-wake cycle and stick with it; eat well and stay active (but don’t exercise or eat too much right before bedtime); establish a quiet, dark, and comfortable environment for sleeping; try to reduce stressful experiences and worries at bedtime; and reduce or eliminate the use of nicotine, alcohol, and caffeine.

While Carrier works to uncover what causes the loss of deep sleep as we age, her existing findings demonstrate that sleep should not be sacrificed. “We are always trying to get by with as little sleep as we can and hoping to optimize our sleep so we can function as well as possible,” says Driver. But the reality is, a good night’s sleep, as with many facets of good health, requires discipline and effort.

Julie Carrier works closely with other researchers at the Centre de recherche de l'Hôpital du Sacré-Coeur de Montréal, at the Institut universitaire de gériatrie de Montréal, and the Centre de recherche en neuropsychologie et en cognition de l'Université de Montréal. She also collaborates with researchers at the Douglas Research Center (McGill) and internationally with researchers in brain imaging at the University of Liège in Belgium, and in motor learning at The Center for Brain and Behavior Research at Israel’s University of Haifa.

Recent joint research projects that Carrier has been involved in include examining the impact of aged-related changes in sleep on the brain using cerebral imaging, the effect of sleep on brain plasticity (including motor learning), the relationship between sleep deprivation and postural control, and sleep in children with attention deficit hyperactivity disorder.

Read about other sleep research at the Sleep Research Society