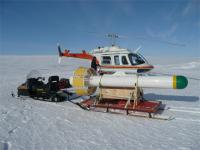 At any given time, about 300 academics are engaged in research in the North. This electromagnetic sensor has been measuring the polar ice cap thickness in the Arctic since 2004.
Christian Haas, University of Alberta

When you turn 50, there’s a tendency to sit back and celebrate your accomplishments. But some 50-year-olds prefer to be bold and try new things. Such is the case for the University of Alberta’s Canadian Circumpolar Institute (CCI). Between building university-degree programs in the North and finding ways to get Canadians to the Antarctic, there’s no time for the CCI to rest on its laurels.

“We want to be the best northern-research centre that serves northerners, academia and government,” says Marianne Douglas, director of the CCI, which celebrates its golden anniversary this year. “We’re only 50 years old, but we’re getting there.”

With a fickle northern climate impacting ice conditions, plants, people and animal behaviour, the CCI is more relevant than ever — not only as a crucial funding agency for northern science and exploration but also as a repository for books, historical documents and interdisciplinary expertise, without which we couldn’t measure the extent of today’s changes and prepare for what might happen tomorrow.

Thanks to a wave of interest in northern issues in the late 1950s, the CCI was formed in 1960 as the Boreal Institute for Northern Studies to focus on Canada’s western boreal regions. In 1990, it reorganized to reflect a shift in contemporary research on Arctic peoples and their environment. That mandate has recently expanded to include the Antarctic, in an effort to compare the two polar regions for a more complete understanding of global environmental change.

One thing, however, has remained constant: the CCI’s commitment to science. With the funding it receives from the federal and provincial governments, as well as endowment and scholarship funds, the CCI apportions about $250,000 annually to students, post-doctoral researchers and faculty so that they can afford the expensive field trips to remote northern settings. 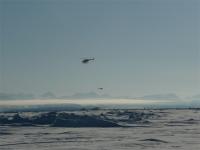 Over the past 50 years, CCI researchers have increased our understanding of the North, from polar bear and caribou populations to language preservation and water quality.
Christian Haas, University of Alberta

Over the decades, CCI researchers have made valuable contributions to our understanding of the North in a range of disciplines. We now know more about changes to polar bear and caribou populations, diamond exploration and mining, cryospheric evolution, subsistence-hunter adaptation, language preservation, water quality, airborne contaminants and aboriginal social transformation. At any given time, about 200 graduate students, post-doctoral researchers and professors from 13 faculties and 40 different departments are actively engaged in Arctic study.

Geophysicist Christian Haas is one of them. Haas and his team have adapted technology used for geophysical mapping to create a lightweight, torpedo-shaped electromagnetic sensor that can be suspended from a helicopter or an airplane to measure sea ice thickness. Before Haas’ work, the only thickness measurements available, other than random core sampling, were gathered sporadically by submarine sonar during military manoeuvres. But every year since 2004, Haas has been measuring the thickness of the polar ice cap between Canada and the North Pole. His data show that the ice is thinning in some years and thickening in others, which suggests predictions about steady polar ice loss may be overly simplistic.

“The ice thickness is not just a function of thermodynamics processes or air temperature,” says Haas, “but also drift and deformation, which are often not understood.”

While the CCI continues to meet the needs of southern scholars, Douglas is focused on earmarking dollars and establishing partnerships for northern students, northern laboratories and northern university programs. The CCI has already begun fundraising for a new scholarship for students north of 60. Named after Nunavut singer-songwriter Susan Aglukark, the scholarship will help northern applicants attend the University of Alberta. But the CCI has also been working with the three territorial colleges to improve research facilities and certify programs so that students have access to well-equipped labs and can stay north to complete their university degree.