Butterflies in the boreal

Butterflies in the boreal

This Anise swallowtail (Papilio zelicaon) was found in a remnant of Garry oak woodland in Victoria. Although the species is not at risk, the habitat where it was spotted certainly is.
Jeremy Kerr, Canadian Facility for Ecoinformatics Research, Biology

When biologist Jeremy Kerr needs a sentinel to demonstrate the effects of climate change, he looks no further than the eastern tailed blue butterfly (Cupido comyntas). That’s because the eastern tailed blue, like other butterfly species Kerr and his students at the University of Ottawa track, has been moving northward over the past 50 years or so as the climate has warmed. Before then, Ottawa was too cold for breeding populations of this tiny butterfly to overwinter successfully.

But come late spring, as they have for several years now, Ottawa area residents like Kerr will find populations of the dime-sized Cupido comyntas feeding on clover and alfalfa in their lawns. There’s even a breeding population across the river in the Gatineau Hills.

“As winters have warmed up, that has enabled butterflies like swallowtails and the eastern tailed blue to survive in areas where they otherwise couldn’t have survived,” says Kerr. “They’re shifting north in exactly the way that our models predicted they should.”

This shift is significant because it predicts the future for other species affected by both climate change and habitat destruction. By tracking butterfly ranges, Kerr has demonstrated that as the climate warms, butterflies move north, and he can begin to map where they will go. Ultimately, this will enable policy-makers to plan for the shift and decide whether they want to take action to mitigate climate change in order to preserve biodiversity in specific areas.

For Kerr, finding evidence of the butterflies’ changing range helps validate his research. As well as creating mathematical models to predict the future impact of climate change on species, he has married Meteorological Service of Canada records from the past century with the recorded locations of butterfly species during the same period. By combining the two databases, he is able to chart the effects of climate change on butterfly species with far greater accuracy. Such accuracy is vital for governments to create science-based policies.

“We’re not guessing about what climate change will look like — we know,” says Kerr. “We’ve been able to show that climate changes in Canada during the 20th century have caused widespread changes in where you find species.” Having that past data, he says, gives him a stronger basis to make predictions about the future. 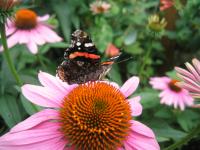 Unlike some of its distant relatives, the red admiral seems to have adapted to the unusual habitat of Northern Ontario's boreal forest.
Jeremy Kerr, Canadian Facility for Ecoinformatics Research, Biology

In addition to the meteorological records, Kerr and his students have accessed about 100,000 digitized records of butterfly collections stored in Canada’s natural history museums. Each record includes the date the specimen was found and its exact latitude and longitude.

Kerr’s research has identified another butterfly that has moved from southern Ontario to the boreal forests of Northern Ontario as the climate has warmed: the red admiral (Vanessa atalanta). “We’re seeing it in places that historically it has never been observed,” says Kerr. “It’s not supposed to be there. Butterflies don’t really like boreal conditions.”

While the red admiral seems to have adapted to this unusual habitat, others, like the Karner blue butterfly (Lycaeides melissa samuelis), are no longer found in the wild in Canada. The combination of the disappearance of the Karner blue’s habitat — the oak savannahs of southern Ontario — and climate change seems to have caused its extirpation. “The last one disappeared in 1991 during a drought, a weather event that’s becoming more frequent with climate change,” says Kerr. Ultimately, the movement of species due to climate change will likely mean that only the hardiest, most common species will survive. 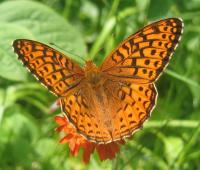 Many species are shifting north or to higher elevations in response to human-induced climate change. This Atlantis fritillary (Speyeria atlantis) was found on top of a mountain in the Quebec Laurentians.
Jeremy Kerr, Canadian Facility for Ecoinformatics Research, Biology

Governments are paying attention to Kerr’s evidence. Kerr was one of four Ontario biologists whose research informed a letter that his colleagues across the province signed when Ontario was redesigning its endangered-species legislation in 2006. The science made clear the importance of protecting habitat for any jurisdiction that is proposing a law to save endangered species.

Ontario eventually adopted all the changes to the legislation that Kerr and his colleagues had suggested, such as including strong protections for habitat. “At the end of it,” says Kerr, “Ontario has a really good endangered-species law that protects habitat.” 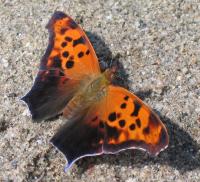 In response to rapid environmental changes in Canada, the question mark butterfly (Polygonia interrogationis) has shifted its range. Where it will go in the future is uncertain but Kerr's research has begun to provide needed answers.
Jeremy Kerr, Canadian Facility for Ecoinformatics Research, Biology

That need to protect endangered species is also why Kerr is a member of the board of the International Boreal Conservation Science Panel, an environmental advisory group that provides scientific expertise to decision-makers about the importance of conserving boreal forests across Canada. In addition to being home to a variety of species, boreal forests are an important carbon sink that stores carbon in the ground. If the forests are destroyed, that carbon can be released into the atmosphere — and there is enough stored in the Canadian boreal forest, says Kerr, to accelerate global warming.

“Jeremy’s work has been pivotal in showing the urgent need for much broader protection of Canada’s boreal forest, both because of historical patterns of industrial land use in southern Canada and now because of current and projected northward shifts in the geographic ranges of species as a result of climate change,” says Jeff Wells, the senior scientist for the International Boreal Conservation Campaign. The campaign is an initiative of the Pew Charitable Trusts, a U.S.-based non-profit group that is dedicated to public education and advocacy for protecting the world’s boreal forests.

In 2008, Ontario announced that it plans to ban forestry and mining in roughly half of its northern boreal forest — one of the largest conservation announcements in history and exactly the amount recommended by the International Boreal Conservation Science Panel. Quebec is also moving forward with legislation to protect half of its intact boreal zone, and Manitoba is planning to establish a protected boreal area east of Lake Winnipeg, continuous with Ontario’s protected areas.

These policy impacts are rewarding for Kerr. He is determined to ensure that the rare species which are a unique part of the Canadian experience endure for generations. “It doesn’t get any more obvious that climate change is a problem we have to come to grips with.”