Faced with long waiting lists for treatment, a fractured bone or hip can turn into a senior's worst nightmare. Now, UBC researchers are addressing the problem before it happens
By Stuart McCarthy 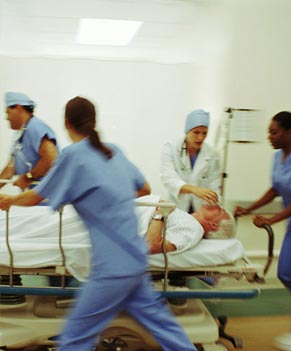 Imagine being an 80-year-old woman rushed to hospital with a broken femur and being told the next appointment with an orthopedic surgeon to have your leg repaired is three months away. Unthinkable? Not quite. In fact, for many seniors across Canada, this fictional scenario could soon become a cold hard reality.

Canadian health care professionals predict that unless major new initiatives are put in place to prevent and deal with bone fractures among the elderly, the situation could become a major crisis. "There will be people lining up to get bone and hip-fracture surgery—waiting in hospital with broken bones because there won't be an orthopedic surgeon to do the surgery," says Dr. Karim Khan, Assistant Professor of Family Practice and Human Kinetics at the University of British Columbia, and Co-Director of the Bone Health Research Group of the UBC Bone Health Research Laboratory.

Khan says there are a number of factors at play. First, Canada's elderly population is on the rise, bringing with it an increase in orthopedic fractures. "70-year-olds today are fracturing their bones at greater rates than 70-year-olds of 10 and 20 years ago." The reason for the extreme shift? Khan says a major possibility is that with each decade, we adopt a more sedentary lifestyle and given the low state of fitness among today's youth, the future looks very bleak without major changes.

Two groundbreaking studies at UBC's Bone Health Research Laboratory are already having a profound impact on how osteoporosis-related bone fractures are treated. The studies are being made possible with a new lab established with support from the CFI, the Province of British Columbia Knowledge Development Fund, and a UBC research fund established by Dr. Stewart Blusson. "What we're trying to do is prevent fractures," says Khan. "Our goal is primary prevention in children and secondary prevention in the high-risk elderly."

The funding has provided the lab with three core pieces of equipment, two for measuring bone density and a third for assessing a person's balance. One of the new machines at the lab is the Peripheral Quantitative Computed Tomography (pQCT) scanner—one of only three in Canada—which lets researchers see a tomogram, or a cross section of a bone. As a result, researchers can now determine not just bone mass as a way of understanding strength but the actual shape of the bone. "We're moving from studying and measuring bone mass to assessing bone strength," says Khan. "That's important because strength is likely a better predictor of fractures than just mass."

Using the pQCT, Khan and fellow researchers Heather McKay, Janice Eng, and Teresa Liu-Ambrose, just completed a study on 100 women aged 75 to 85. The six-month study involved three groups: heavy lower-body resistance training for one group, agility training for the second group, and stretching exercises for the third group. Of the three groups, the resistance-training group reduced the risk of falling and fracturing bones by 57 percent. They also gained bone mass and obtained relief from back pain. The researchers are the first to have tested resistance training for balance and bone strength in women of this age—a group that often resists exercise because they're afraid of breaking bones—and highlighted the potential they have to improve their health.

The World Health Organization predicts that with an aging, sedentary population, hip fractures globally will increase from 1.7 million in 1990 to 6.3 million by 2050—unless aggressive prevention programs are started. In Canada, there are 25,000 hip fractures annually, leading to death in 20 percent of cases and disability in 50 percent of cases.

The research work being done by Dr. Karim Khan, Co-Director of the Bone Health Research Group of the UBC Bone Health Research Laboratory, is pointing to some very cost-effective ways to pre-empt the crisis. "It has had a big impact around the province, not just on our campus," says Khan.

Previous studies have shown that 25 percent of adult bone mass is formed in children between the ages of 10 and 12. "This period is a really striking window of opportunity," says Khan. "New research in the lab showed that certain jumping exercises augmented bone health and this resulted in the lab developing an exercise program for children." The program, called Action Schools! B.C., has been adopted by the province and is being rolled out across British Columbia.

"The lab also validated a second program in B.C. called Osteofit, an exercise program for people with low bone mass that was implemented, but had never been studied to see if it worked."

Khan’s research showed Osteofit did improve strength and balance and also identified new exercises to increase its effectiveness. He says now that the province knows that Osteofit works, it increased its availability from 31 community centres in the province to 51.

The UBC Bone Health Research Centre is supported by a number of private and public-sector partners:

Merck-Frosst is a pharmaceutical company founded in Montreal in 1899 that employs more than 1,900 people in drug research, development, and manufacturing. The company funded a study with the Bone Health Research Centre for improving doctor education and prevention of fractures. Merck-Frosst researchers have developed a drug called alendronate, marketed under the name FOSAMAX, that is used in the fight against osteoporosis.

Proctor and Gamble is one of the world’s largest producers of consumer products. It originated as a family business in Cincinnati in 1837 and today markets 300 products in 140 countries. Its pharmaceutical division has developed a drug called risedronoate (trade name, ACTONEL) for the prevention and treatment of osteoporosis. Proctor and Gamble has funded bone health research studies on doctor awareness and education of osteoporosis treatment, as well as an international symposium on fall prevention.

The University of British Columbia Blusson Fund helps UBC attract funding from the Canada Foundation for Innovation for projects such as the Bone Health Research Centre. The Fund was created by Dr. Stewart Blusson who donated $50 million to UBC in 1998.

Action Schools! B.C. is designed to provide opportunities for children to be more physically active.

The Osteoporosis Society of Canada is a national association that provides information about osteoporosis and how to prevent it.

Find out more about the Vancouver Coastal Health Research Institute.

Visit the Centre for Hip Health at Vancouver General Hospital.