Two Quebec teenagers team up to create software that could benefit astrophysics
By Émilie Delattre
Ever had a secret desire to discover the future, understand the laws that govern our world, or explain the mysteries of our solar system? Alexandre Turbide and Benoît Landry certainly have. These 17-year-old whiz kids have combined their talents to create a simulator that allows scientists to follow the evolution of a star.

Turbide and Landry became friends at their Quebec high school, Saint-Sacrement de Terrebonne. Turbide has always sought to explore things that aren’t taught in school. By talking to his computer engineer cousin, and reading on his own, he learned about the theory of free energy, an almost infinite energy source. “Free energy is the Holy Grail of physics,” says Turbide. “Some of the greatest minds have searched for it without success.” And so he looked to the stars, which are absolute energy factories.

Landry, on the other hand, looks for answers in mathematics. “In math, like in nature, you find an incredible mix of consistency and chaos,” he says. For him, math is the starting point for all scientific theories and a subject that is “so beautiful it makes your head spin.”

Combining these interests, the duo developed a video game called the Open Source Universal Matrix (OSUM).They used Newton’s laws of gravity and thermonuclear fusion equations to create an index for the gravitational collapse of a star, and also developed several equations that estimate a star’s lifespan. In the end, OSUM allows users to enter the properties of a new star and follow its entire evolution. 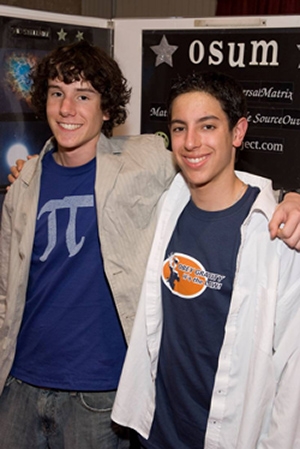 Turbide and Landry have high hopes for OSUM. Not only did it earn them a place in the finals of the 2008 Canada-Wide Science Fair in Ottawa last spring, but the game could also become “a virtual laboratory for astrophysicists,” says Landry, since it allows researchers and amateur astronomers to share their knowledge about the properties of stars. An engineer at the Canadian Space Agency has taken an interest in the game, and l’École de technologie supérieure de Montréal may consider housing OSUM on one of its powerful servers.

Landry says following the evolution of stars and calculating their life expectancy could lead to further developments in nuclear energy and could help us better understand the cycles of the sun, which, he adds, are key to keeping our ecosystem in balance.