Anxious to share his love for mathematics, a researcher at the First Nations University of Canada is giving his students the tools they need to cope in a modern world
By Laura Eggertson
To Edward Doolittle, pure mathematics is "the most beautiful thing in the world." But to many of the Aboriginal students the Mohawk professor is trying to reach, math and science are elusive subjects.

"We're finding that our students have a great deal of difficulty learning mathematics," says Doolittle, Head of the Department of Science at the First Nations University of Canada in Regina. "My belief is that some of the basic mathematical tools are not being given to our people at a young age. For students to understand and get excited about math, they have to absorb the concepts early."

Doolittle says that, usually, Aboriginal students have been drawn to careers in arts and social sciences. But he stresses that's not enough. He believes there's a great need for people to serve Aboriginal communities as professionals in all disciplines."

"There are many failures in the education of Aboriginal people in our country, historically," Doolittle says. "One of the ways I'm trying to address this is to look at ancient Aboriginal culture and draw out some of the mathematical concepts that were present in our cultures." So he's mining the field of ethnomathematics—the science of applying a particular group's cultural perspectives to the understanding of mathematics—for concepts he'll use to design unique math curricula for Aboriginal students. Eventually, Doolittle hopes to develop curricula that teachers can use for students at all levels, from elementary school to university, for both children and adult learners.

In the past, mathematics has played a central role in the education of indigenous young people—even if they were unaware of it. The creation stories that Ojibwa, Iroquois, and other First Nations peoples have used for generations to teach children about the formation of the world contain both mathematics and cosmology, says Doolittle, whose father's family is from the Six Nations of the Grand River, near Brantford, Ontario. Although the children may not have realized it at the time, they were actually absorbing numerical sequences, patterning, and other abstract mathematical concepts when they listened to these stories.

Similarly, farming cultures—like the Iroquois and the Mohawk—used mathematical calculations and patterns throughout their history. "Our stories and myths give us all kinds of ideas about time, place, motion, and number—all these abstract concepts," says Doolittle. "I'm looking for material that can be used to teach modern mathematical concepts, but that's also consistent with traditional thought patterns—a bridge between traditional culture and modern culture and mathematics."

Doolittle is also looking to archeoastronomy—the study of the astronomy of ancient peoples—learn about the calendar systems of Aboriginal peoples like the Mayans, who had one of the ancient world's most sophisticated systems. Using those cultural concepts as guides, he's organizing and developing examples that will help Aboriginal students become excited about math and science by learning material that's also culturally relevant. "Mathematics is the gatekeeper for many careers, particularly science and engineering," he points out.

Throughout Canada, there are only about 150 people of Aboriginal descent working among the country's 165,000 practising professional engineers. That's according to Corinne Mount Pleasant-Jetté, an Assistant Professor of Engineering and Computer Science at Montreal's Concordia University.

"It's entirely clear that Aboriginal people don't opt for careers in science, and specifically don't opt for academic programs in engineering," says Mount Pleasant-Jetté. That's why she founded the Native Access to Engineering Program at Concordia, and why she—like Edward Doolittle—has developed curriculum models incorporating cultural teachings and examples, for teachers and Aboriginal students alike. 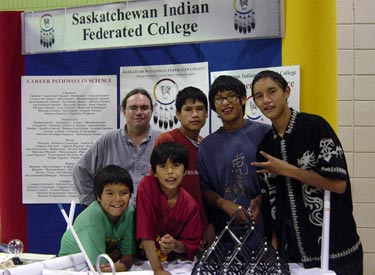 There are three main reasons Aboriginal people don't choose careers in math or science, Mount Pleasant-Jetté says. They don't excel in this area and, in fact, often drop out after Grade 8. They don't have role models that expose them to the professions. And their teachers don't connect the dots between math lessons, homework, post-secondary studies, career choices, and professional practice, she says.

Even in a specialized environment, the number of students studying math or science isn't overwhelming. For example, the First Nations University of Canada in Regina has a fully functional Department of Science, with eight faculty members and a capacity for at least 200 students. But there are only 30 students enrolled in all four years of the undergraduate program—and only four graduated in 2004. Just one percent of the university's population of 2,600 students is enrolled in the sciences. Most of the rest of the students are studying arts or social sciences.

That breakdown is a typical illustration of the dearth of Aboriginal students—and Aboriginal professionals—in science and technological careers says Doolittle. It's the reason he's developing curricula dedicated to engaging Aboriginal students in math and sciences, and is tailoring learning to meet their needs.

The work that Doolittle is doing in Regina, and that Mount Pleasant-Jetté and her colleagues are carrying out in Montreal, is providing hope. Just as researchers and educators were able to reverse the imbalance among men and women in science and math-oriented careers over the last generation, there's a good chance they could redress the imbalance with Aboriginal students, says Mount Pleasant-Jetté. She believes teacher training is a critical component of the process. "For native kids, there needs to be some pedagogical approach that is appropriate to their method of understanding and respects the fact that they sometimes make mistakes, does not ridicule them, and does not assume that because they don't ask a question, they understand things."

In the summer of 2003, Doolittle began taking his love of mathematics on the road. The trip was part of a travelling science show developed in partnership with the Federation of Saskatchewan Indians. The Federation's summer science festivals take role models—like Doolittle—to First Nations communities around the province to demonstrate to students why science and mathematics are fun, exciting, and offer rewarding careers. The program promotes science education by linking traditional knowledge with western or textbook science—through Aboriginal people called "knowledge-keepers."

"We go into the schools in First Nations communities to promote university science and math," says Terrina Bellegarde, manager of the science program for the Federation of Saskatchewan Indians. "It's extremely important right now because we have such a low enrolment."

As Saskatchewan's Aboriginal population booms, attracting Aboriginal students to critical science and technology-based professions will be even more important in the coming years. Doolittle's presentations and displays—from problem-solving through puzzles and building structures, to demonstrating the power of signal processing—intrigues the students who participate. And that's the first step to an attraction that Doolittle hopes will last a lifetime.

"One of the students said to me, 'Your job looks like it must be a lot of fun,'" Doolittle remembers, "and I said 'You're right—it's a lot of fun.' That's exactly the kind of message I'm trying to get across."