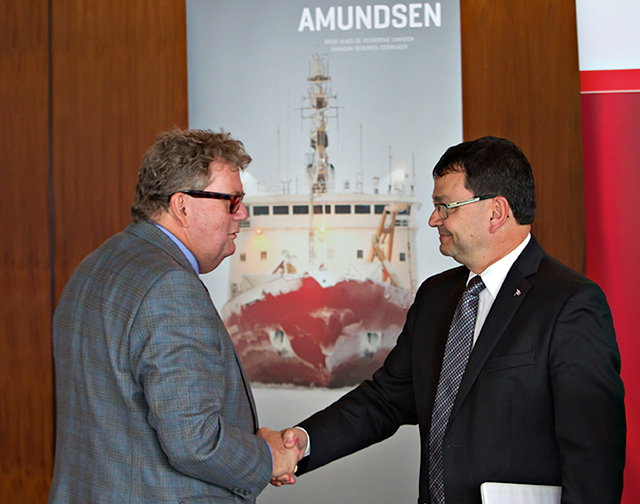 January 23, 2015 — Quebec City, Quebec — Today, the Honourable Ed Holder, Minister of State (Science and Technology) announced significant investments through the Canada Foundation for Innovation (CFI) to support the operation and maintenance of nine unique national research facilities that contribute to Canada’s reputation as a global leader in research and innovation.

Minister of State Holder highlighted the investment in the scientific infrastructure and operations aboard the CCGS Amundsen, Canada’s only dedicated research icebreaker, as part of nine unique national research facilities receiving funds. The cutting-edge arctic research program conducted on the Amundsen, along with the science and innovation emerging from the other eight unique research facilities, reflect their importance in ensuring the country’s social, economic and environmental well-being.

“In our government’s updated Science, Technology and Innovation Strategy, we are making record investments necessary to push the boundaries of knowledge, create jobs and prosperity and improve the quality of life of Canadians. We are providing support to some of Canada’s most promising national research facilities whose research leads to important social, health, economic and environmental benefits for Canadians.”

“Our government’s record support for science, technology and innovation is creating jobs and opportunities for Canadians. Today’s successful projects at Université Laval and INRS further demonstrate how leading edge research benefits Quebec while training the next generation of researchers for the modern economy.”

“These unique national research facilities have a proven record of being catalysts for extraordinary ideas. When talented scientists converge in these state-of-the-art spaces, they are inspired to push the boundaries and think big.”

“More than a third of the money announced today has been allocated to the research vessel, CCGS Amundsen. The research conducted aboard the Amundsen, which began its scientific mission in 2002, can be continued thanks to this exceptional investment of more than $7 million.”

“The Amundsen serves as an invitation to researchers to come work in the Canadian Arctic. This funding will allow for new, high-calibre international collaborations to take place.”

“We are grateful to the CFI for providing this infrastructure funding to help support the NCIC CTG’s mission to conduct important clinical trials allowing cancer patients from across the country access to some of the most cutting edge cancer treatments available.”

“Space weather affects us all—from the power grids that keep our lights on to the satellites that support our information economy.This major investment from CFI in the SuperDARN radar network will help create new knowledge to cope with these challenges, while creating unique opportunities for students to be trained in making space science discoveries.”

“The strength of Érudit is the bringing together of a number of members of the Canadian scholarly publishing sector to create a large body of documents, while establishing partnerships in Canada and worldwide to increase the visibility of published content.”

A full list of the funded projects is available online at Innovation.ca. For updates, follow us on Twitter @InnovationCA and tune in to our Youtube channel for videos about the difference CFI-funded researchers are making in Canada.

The CFI Research Facilities Navigator – An online directory of CFI-funded labs and major science facilities, such as the CCGS Amundsen, that are available to collaborate with the private sector.

Université Laval and the CCGS Amundsen